I understand that HMMs (Hidden Markov Models) are generative models, and CRF are discriminative models. I also understand how CRFs (Conditional Random Fields) are designed and used. What I do not understand is how they are different from HMMs? I read that in the case of HMM, we can only model our next state on the previous node, current node, and transition probability, but in the case of CRFs we can do this and can connect an arbitrary number of nodes together to form dependencies or contexts? Am I correct here?

From McCallum's introduction to CRFs: 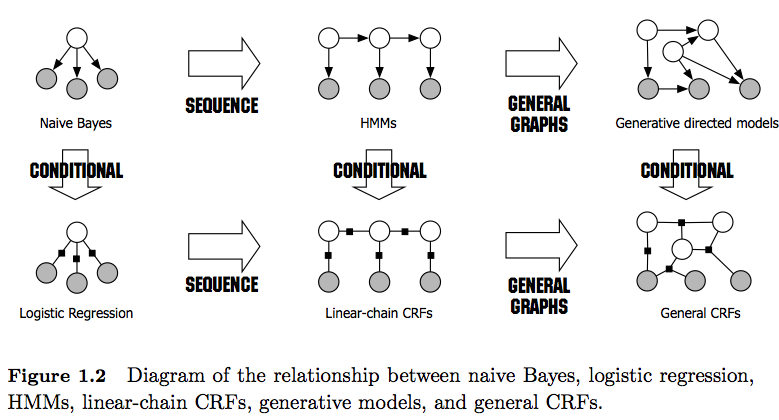 As a side note: I would kindly ask you to maintain this (incomplete) list so that interested users have an easily accessible resource. The status quo still requires individuals to investigate a lot of papers and/or long technical reports for finding answers related to CRFs and HMMs.

In addition to the other, already good answers, I want to point out the distinctive features I find most noteworthy:

It is probably the best read for topics such as HMM, CRF and Maximum Entropy.

PS: Figure 1 in the link gives a very good comparison between them.

Not the answer you're looking for? Browse other questions tagged machine-learning hidden-markov-model natural-language conditional-random-field or ask your own question.