Why does SPSS throw out variables in OLS (and how can I prevent this from happening)?

My dataset consists of 4,000 companies from 24 countries. Each company has certain features, the IV's. Consider the variable list below: green is the DV, red the IV's and blue are dummies (one for each country a company might be from) for which I want to control the OLS output. There are 24 countries entered.

However, once I let SPSS perform an OLS on these variables, it throws out most of the IV's. 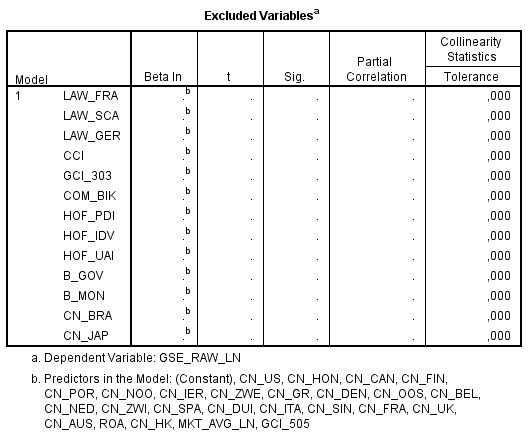 The resulting model is almost useless in explaining any of the variance in the DV. My questions are: 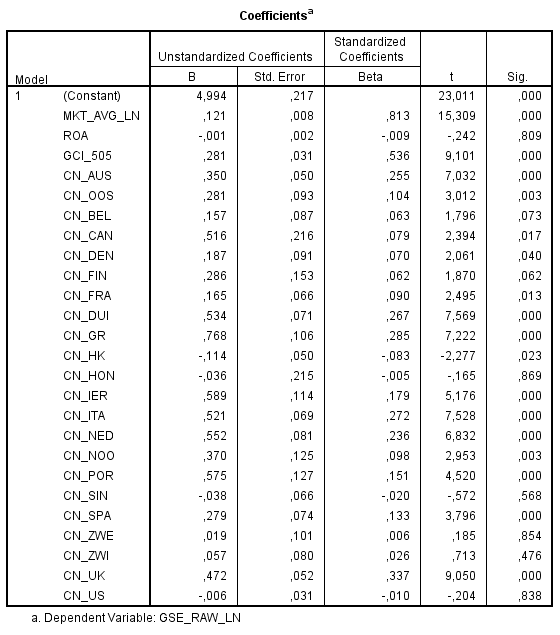 Added regression model in response to @Penguin_Night's and @NickCox's answers:

It is very difficult to diagnose without knowing which one is categorical, binary, and continuous.

If a categorical variable has k levels, you only need (k-1) dummies to capture the information. If you fit all k of them, SPSS will throw one out. The reason is that if all k are present, the whole set are perfectly collinear, standard errors will then get too big; the model, fail.

Another reason for some others being excluded is probably their information was already perfectly captured by other variables. For instance, you "LAW" categorical variable may be already perfectly explained by the country dummies because it's very unlikely that a country will have two equally superior official languages or law systems.

I think overall, the analysis presented here is too hasty. I'd suggest checking some tabulations between predictors to better understand if there is any exclusiveness going on. Fit the model step by step manually to observe any change.

There can be many reasons.

Not the answer you're looking for? Browse other questions tagged regression spss least-squares or ask your own question.

1
Looking for help with interpreting my OLS models

1
SPSS dummy variables in OLS
5
How to control for market return in an (SPSS) OLS?
2
How to solve collinearity problems in OLS regression?
2
Why do coefficients and significance levels change so much in my OLS? Do I need MIXED model instead?
5
What regression analysis should I perform on my data and why?
0
How should I interpret the result of my OLS (involving H-statistic)?
2
Help on deciding how to perform a regression analysis on my data, and why? SPSS, Count model, Panel data
2
How to perform ordinal regression with rank-based dependent variable?