How do you interpret the standard deviation of the slope random effect in multilevel models?

Suppose I want to show how Urbanization percentage changed across time in Western and Eastern Europe, so it is a multilevel model with random slopes. Suppose the software shows that the mean of the standard deviation of the slope random effect is 0.05 (5%). How would the formal interpretation of it look like? I know that its interpretation is often not of a primary interest, but suppose that for some reasons I have to make it. How would it sound?

Lachlan below has already provided an awesome answer to the main question asked. In this update I want to elaborate a bit on my model so as to further clarify my question.

I have fitted my model with INLA (Bayesian method), and it has only one fixed effect - fixed intercept, which is going to be the same for both regions (Western/Eastern Europe). So the question now is whether this fixed intercept plays a role of an overall average rate of change from which individual countries’ rates of changes deviate?

As a full example, we can consider a textbook model, at

The model here has the same specification as mine. IV here is also time (days of sleep deprivation) and DV is also a metric variable. There are 18 groups (subjects), so 18 random slopes, and only one fixed effect – intercept. Variability is presented as precision, but it can be converted to Standard deviation.

Below I have attached a picture from the book with my short notes. 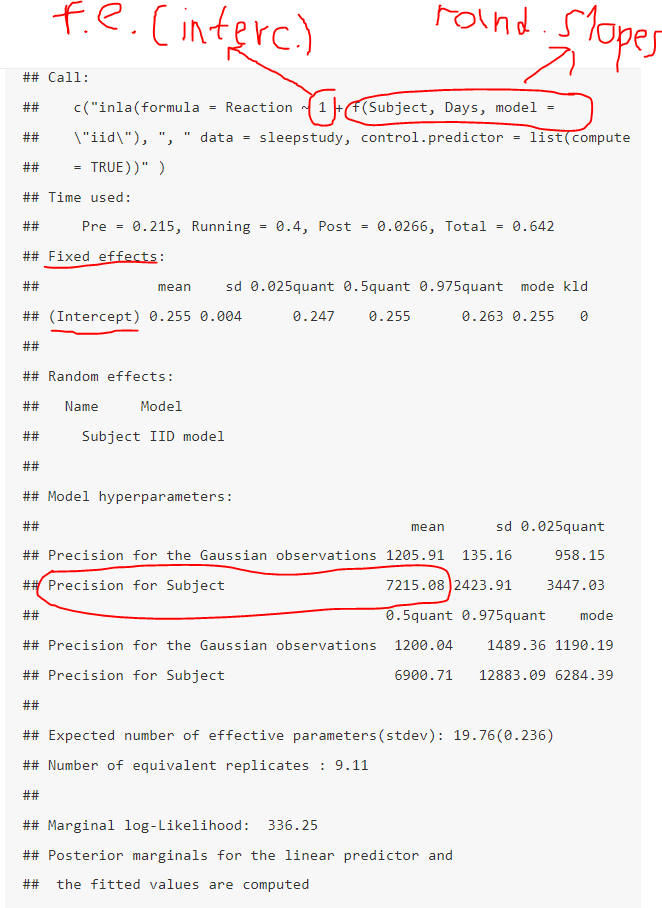 Suppose, in this model we have converted "Precision for Subject" into Standard deviation. Does its mean show the amount of deviation of subjects’ individual rates of reaction times from the overall average rate of change, which in this model turns out to be a fixed intercept?

In short, the standard deviation of the random slope summarises how much countries tend to deviate from the overall average rate of urbanisation change. If the SD is small (contextually), the countries are similar in their urbanisation trajectories. If it's large, they tend to vary considerably.

So the question now is whether this fixed intercept plays a role of an overall average rate of change from which individual countries’ rates of changes deviate?

No, not quite. In the sleep study example you've given, the fixed intercept represents the overall average Reaction time when Days = 0. Note that, because your model does not include a random intercept, your model constrains all subjects to have the same starting point. The interpretation of the intercept term is unrelated to the random slope.

Suppose, in this model we have converted "Precision for Subject" into Standard deviation. Does its mean show the amount of deviation of subjects’ individual rates of reaction times from the overall average rate of change, which in this model turns out to be a fixed intercept?

Not quite. In the (in my experience) more common formulation of the longitudinal model, a fixed effect for 'Days' is typically included. If this fixed effect term were included, your interpretation would be right. The coefficient for the fixed effect Days would represent the overall average slope and the standard deviation of the random slope term would summarise how much the Subject-specific slopes vary about that average.

In the model you've described, the standard deviation of the random slope instead summarises the deviation of subjects’ individual rates of reaction time change from zero. Including a random slope without a corresponding fixed effect is like including an interaction term without the corresponding main effect. The main effect is assumed to be exactly zero. When the overall average is non-zero, as in the sleep study example, this can produce quite poor model fit.

The model here has the same specification as mine.

Take this with a grain of salt as I'm not familiar with INLA or its syntax, but the model described seems a bit unusual for longitudinal data, especially for the kind you have described. Firstly, as mentioned, because a fixed effect for Days is not included, the overall average slope is forced to be zero. Secondly, the starting point (Days = 0) for each subject is constrained to be equal, as you have not allowed the intercept to vary by Subject. Additionally, when you include a random intercept and a random slope, this allows for estimating the correlation between that intercept and slope. This can help to answer questions such as: do people with better reaction time at baseline tend to deteriorate more rapidly?

This link details implementing the correlated random intercept and slope models in INLA if that's of interest.