A flips a fair coin 11 times, B 10 times: what is the probability A gets more heads than B?

A flips a fair coin 11 times, B 10 times, what is the probability A gets more head than B?

For the first 10 times of A, he has the same expected number of heads as B.

instead of making arguments, I like to find systematic solutions:

I don't know how to find the sum from the last line, can someone help?

Your "naive first thought" is the clever (standard) solution.

By the law of total probability,

As an alternative approach, you wish to evaluate the double sum

(In case the algebra isn't obvious, the first equality exploits the Binomial coefficient symmetry and the second is the change of variable $a^\prime = 11-a,$ $b^\prime = 10-b.$ We can be a vague about the endpoints of the summations because whenever $a$ or $a^\prime$ is not in the range from $0$ through $11$ or $b$ or $b^\prime$ is not in the range from $0$ through $10$ the Binomial coefficients are zero.)

Because the indexes in the two sums on the left and right sides (1) never overlap and (2) cover all the possibilities (since either $a\gt b$ or $a\le b$ but never both), together they give the total probability, which is $1.$ Consequently, since those sums are equal, each is $1/2,$ QED. 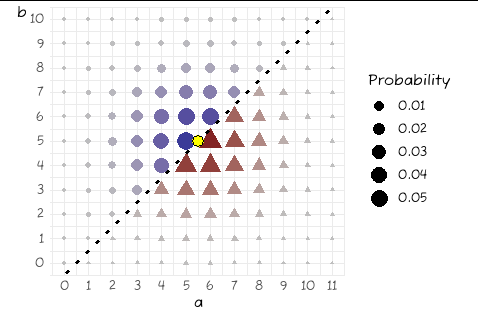 This figure shows the rotational symmetry of the distribution under the mapping $(a,b)\to(11-a,10-b).$ The blue circles are rotated around the yellow dot into red triangles of exactly the same probability. The desired sum is the total of the blue circles, which therefore must be $1/2.$

Here's how I often approach this kind of 'probability that player A scores more than player B' problem (which I first came up with when dealing with similar questions involving dice, many years ago). It's not clever, but it generalizes in various ways and does reduce the calculations involved. I'll try to explain in fair bit of detail but in practice the whole process takes a few moments of thought before a simplified calculation in this case involving no summing or combinatorics at all.

Let's score each head '1' and each tail '0' and sum the scores (this is just counting but emphasizes the fact that we're summing outcomes). Let $X_A$ be the score for $A$ and similarly for $B$ ($X_B$).

Now consider a different game where player B counted tails instead of heads, and call that variable $Y_B$. The probabilities of interest with fair coins are unchanged, so we would get the same answer if we responded to this question (i.e. if we computed $P(X_A>Y_B)$). Now for this new game, player B's score $Y_B=10-X_B$. Consequently:

By symmetry the probability that this total exceeds 10 is $\frac12$. $\qquad\square$

Note that this strategy works for other questions like "Player A tosses 12 times and player B tosses 9 times, what's the probability player A beats player B by more than 3?".

In that case $P(X_A>X_B+3) = P(X_A>(9-X_B)+3) = P(X_A+X_B>12)$. This is a straight binomial problem, though we can use symmetry to simplify it further to calculating just two adjacent binomial probabilities.

With sums of dice, you take one more than the number of faces to flip it around. e.g. for a six-sided die, it's equivalent to subtracting a six-sided die from 7. This lets you put B's rolls on A's side of the probability again, reducing comparing two sums of dice to comparing a single sum (with more dice) to a constant number, reducing it to a straight convolution, which is easy to automate calculations for.

This is not really an answer but purely involves your "naive first thought".

You base that on the fact that A and B have the same expected value of heads if only the first $10$ times are taken into account.

This is not correct.

Then for both the expected number of heads gained in the first $4$ throws is $2$.

It would be correct to base it on the fact that A and B have the same probability of winning if only the first $10$ times are taken into account.

Think about it like this: A and B want to play a fair game ($10$ flips for each) but foreseeing that the game can end in a draw (which they want to prevent) they make the following agreement:

Then evidently this game is fair and gives both players a chance of 50% to win.

Further it is true that A wins iff he throws more heads than B.

For your specific case (R code)

6
Probability of always more heads than tails
33
What is the name of the statistical fallacy whereby outcomes of previous coin flips influence beliefs about subsequent coin flips?
3
Getting heads in an infinite series of coin flips- certain or almost certain?
2
Probability that the first heads is even - squaring an intuition
29
Statistics concept to explain why you're less likely to flip the same number of heads as tails, as the number of flips increases?
8
With what probability one coin is better than the other?
0
To find the conditional probability of heads in a coin tossing experiment
2
How to find the probability of getting heads of an unknown coin when having the number of heads and trials?