I'm trying to verify that my dice are reasonably fair and balanced. I'm not sure I'm doing it right, though, since I'm basically teaching myself stats without references. To achieve this, I've settled on the chi-squared test. Here's what I'm doing:

I have a sample size $N$ of rolls. On a dC, where $C$ is the number of sides, the expected frequency for each roll 1 thru $C$ is $\frac{N}{C}$. Then I compute the $\chi^{2}$ value for the distribution from $1$ to $C$. Then, I compute the chi squared distribution (in Excel using CHIDIST) with degrees of freedom equal to $C-1$.

The problem is, this is returning nonsensical values. For instance, on a d4, if I input 6000 evenly distributed rolls, chidist returns .801252. No matter how high I make $N$, even if there's an even distribution, I'm not getting below .801252. I know I'm doing something wrong here, but I'm not sure what it is.

The chi squared distribution value should be falling to within any sort of significance. Any help?

Edit: Per request, I'm posting a screenshot of my Excel layout and listing the formulas used. I've hidden the irrelevant rows. 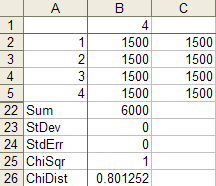 A chi-square statistic gets bigger the further from expected the entries are. The p-value gets smaller. Very small p-values are saying "If the null hypothesis of equal probabilities were true, something really unlikely just happened" (the usual conclusion is then usually that something less remarkable happened under the alternative that they're not equally probable).

What formula are you using?

(An additional check - on these four more typical counts

I gave an answer there which points out that - if you really want to test dice - you might consider other tests.

As you noted in your response, the CHITEST function in Excel returns the p-value rather than the test statistic (which seems kind of odd to me, given you can get it with CHIDIST).

In the case where all the expected values are the same, a quick way to get the chi-squared value itself is to use =SUMXMY2(obs.range,exp.range)/exp.range.1, where obs.range is the range for the observed values and exp.range is the range of the corresponding expected values, and where exp.range.1 is the first (or indeed any other) value in exp.range, giving something like this:

A mildly clunky but even easier alternative is to use CHIINV(p.value,3), to obtain the chi-square statistic, where p.value is the range of the value returned by CHITEST.

Edit: Here's a couple of plots for the two sets of data you posted.

The solid grey lines are the expected numbers of times each face comes up on a fair die.

The inner pair of dashed lines are approximate limits between which the individual face results should lie 95% of the time, if the dice were fair. (So if you rolled a d20, you'd expect the count on one face - on average - to be outside the inner limits.)

The outer pair of dotted lines are approximate Bonferroni limits within which the results on all faces would lie about 95% of the time, if the dice were fair. If any count were to lie outside those bounds, you'd have some ground to suspect the die could be biased. 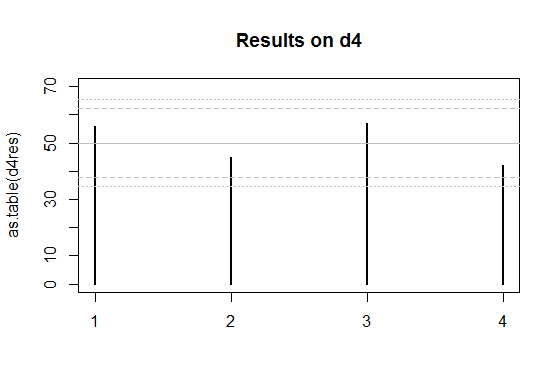 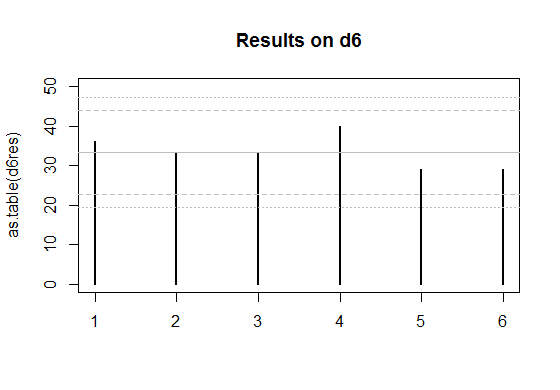 Edit to add some explanation --

The basic plot is just a plot of the counts. For a die with $k$ sides, the count of the number of times a given face comes up (an individual count) is effectively distributed as a binomial. If the null hypothesis (of a fair die) is true, it's binomial$(N,1/k)$.

So the central grey line is marked at $\mu=N/k$. This much you already know how to do.

If $N$ is large and $p = 1/k$ is not too close to 0 or 1, then the standardized $i^\text{th}$ count ($\frac{(X_i-\mu)}{\sigma}$) will be well approximated by a standard normal distribution. About 95% of a normal distribution lies within 2 standard deviations of the mean. So I drew the inner dashed lines at $\mu \pm 2\sigma$. The counts are not independent of each other (since they add to the total number of rolls they must be negatively correlated), but individually they have approximately those limits at the 95% level.

So that gives the dashed lines.

Correspondingly, if the toss counts were all independent (which they aren't quite, as I mentioned), the probability that they all lie in some bound is the $k^\text{th}$ power of the probability that one does. To a rough approximation, for independent trials if you want the overall rate (across all faces) of falling outside the bounds to be about $5\%$, the individual probabilities should be about $0.05/k$ (there are several stages of approximation here, not even counting the normal approximation; to work really accurately you need lots of faces and small probabilities of falling outside the limits).

So I drew the outer limits for the four-sided die (d4) case at $\mu \pm c\sigma$, where $c$ cuts off $0.00625$ of the standard normal distribution in the upper tail. That's about $2.5$ (again, it doesn't pay to be overly accurate about the limit, since we're approximating this thing all over).

The d6 works similarly, but the limit for it cuts off an upper tail area of $0.025/6$, which roughly corresponds to $c=2.64$ at the normal distribution.

For the d4, if the null hypothesis were true, the actual proportion of cases with any of the counts falling outside the outer bounds of 2.5 standard deviations from the mean would actually be about 4.2% (I got this by simulation) - easily close enough for my purposes since I don't especially need it to be 5%. The results for the d6 will be closer to 5% (turns out to be around 4.5%). So all those levels of approximation worked well enough (ignoring the existence of negative dependence between counts, the Bonferroni approximation to the individual tail probability, and the normal approximation to the binomial, and then rounding those cutoffs to some convenient value).

These graphs are not intended to replace the chi-squared test (though they could), but more to give a visual assessment, and to help identify the major contributions to the size of the chi-square result.

61
Is chi-squared always a one-sided test?
29
How can I test the fairness of a d20?
5
Verifying that a random generator outputs a uniform distribution
0
Statistical test for a random die roll?