Help me understand Bayesian prior and posterior distributions

In a group of students, there are 2 out of 18 that are left-handed. Find the posterior distribution of left-handed students in the population assuming uninformative prior. Summarize the results. According to the literature 5-20% of people are left-handed. Take this information into account in your prior and calculate new posterior.

I know the beta distribution should be used here. First, with $\alpha$ and $\beta$ values as 1? The equation I found in the material for posterior is

Some tips would be much appreciated. A general lecture on prior and posterior distributions wouldn't hurt either (I have vague understanding what they are but only vague) Also bear in mind I'm not very advanced statistician (actually I'm a political scientist by my main trade) so advanced mathematics will probably fly over my head.

Let me first explain what a conjugate prior is. I will then explain the Bayesian analyses using your specific example. Bayesian statistics involve the following steps:

The basis of all bayesian statistics is Bayes' theorem, which is

These rules of thumb follow directly from the nature of the Bayesian analysis procedure:

An excellent overview of some possible "informative" and "uninformative" priors for the beta distribution can be found in this post. 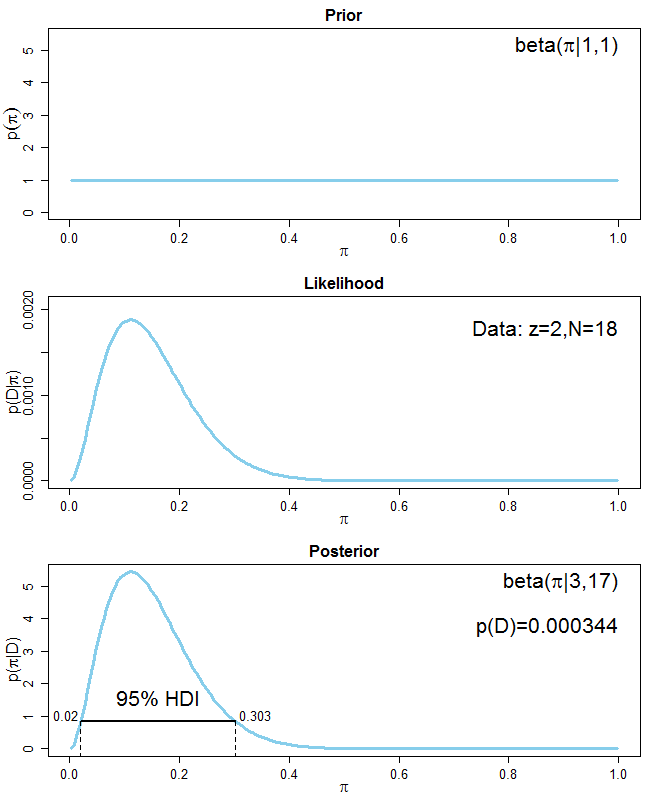 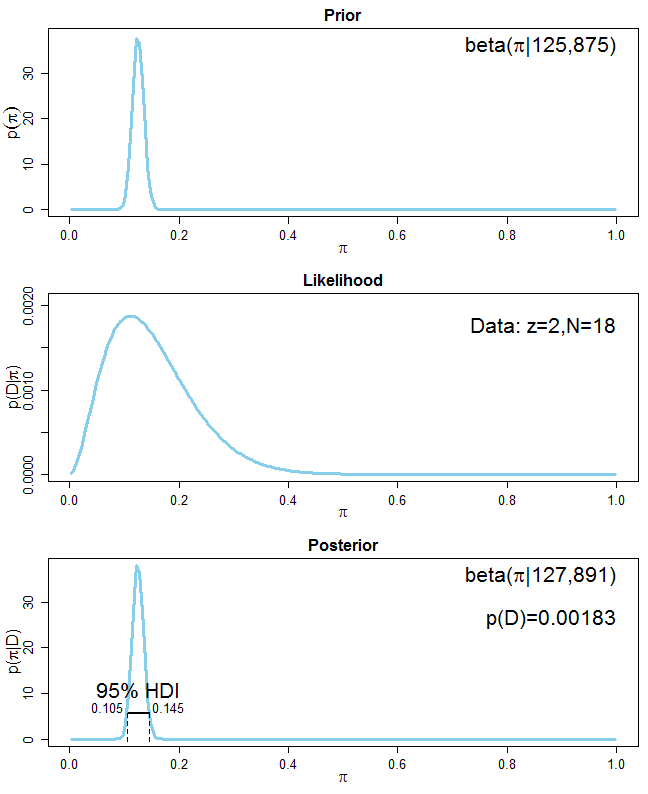 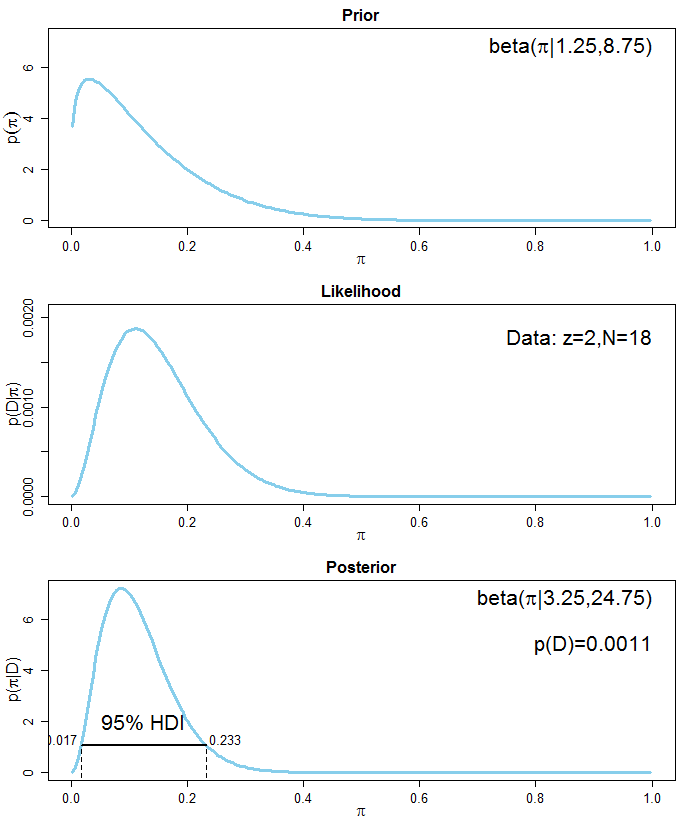 A more advanced method of incorporating the prior information would be to say that the $0.025$ quantile of your prior beta distribution should be about $0.05$ and the $0.975$ quantile should be about $0.2$. This is equivalent of saying that your are 95% sure that the proportion of left-handers in the population lies between 5% and 20%. The function beta.select in the R package LearnBayes calculates the corresponding $\alpha$ and $\beta$ values of a beta distribution corresponding to such quantiles. The code is 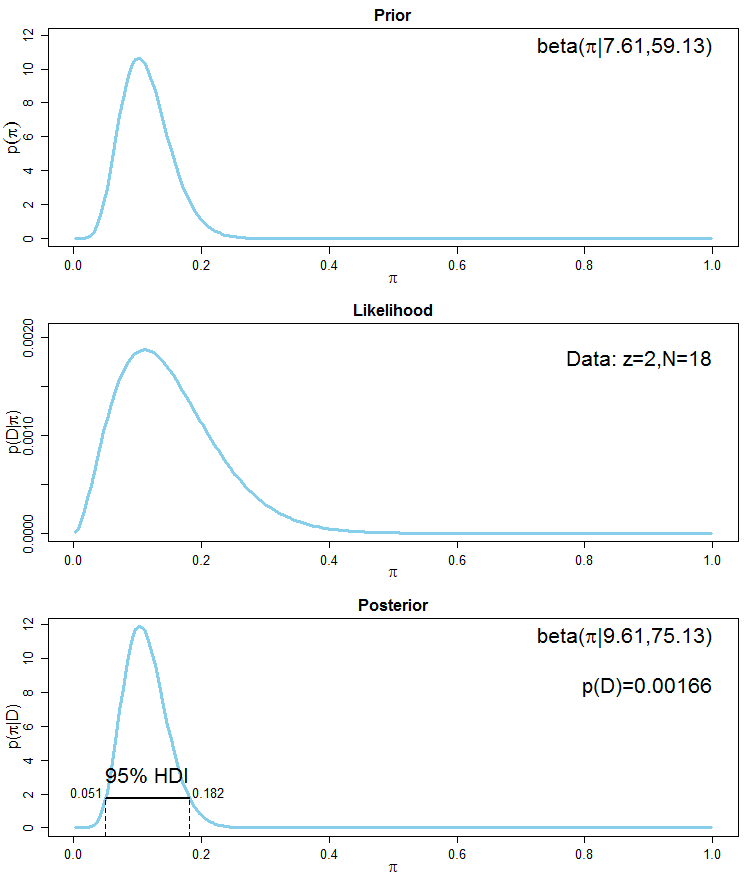 A beta distribution with $\alpha$ = 1 and $\beta$ = 1 is the same as a uniform distribution. So it is in fact, uniformative. You're trying to find information about a parameter of a distribution (in this case, percentage of left handed people in a group of people). Bayes formula states:

which you pointed out is proportional to:

In the first part of your question it asks you to define a suitable prior for "r". With the binomial data in hand it would be wise to choose a beta distribution. Because then the posterior will be a beta. The Uniform ditribution being a special case of beta, you can choose prior for "r" the Uniform disribution allowing every possible value of "r" to be equally probable.

In the second part you have provided with the information regarding the prior distribution "r".

With this in hand @COOLSerdash's answer will give you the proper directions.

Thank you for posting this question and COOLSerdash for providing a proper answer.

Not the answer you're looking for? Browse other questions tagged distributions bayesian prior posterior or ask your own question.

0
Estimate probability from sample frequency in a binomial distribution
530
What is the intuition behind beta distribution?
88
What is an "uninformative prior"? Can we ever have one with truly no information?
64
What is the difference in Bayesian estimate and maximum likelihood estimate?
21
Choosing between uninformative beta priors
14
Whence the beta distribution?
13
Bayesian logit model - intuitive explanation?
12
What is the probability that the Pfizer/BioNTech vaccine is not/less effective than the study suggests?
7
Posterior vs conditional probability
7
How do I choose parameters for my beta prior?
See more linked questions