For neural networks, is mini-batching done purely because of memory constraints?

I want to understand why mini-batching is used to train neural networks (rather than using the entire dataset for every update).

Is the reason purely that with big datasets, it requires big computing power to use entire dataset every time, so mini-batching is the intermediate solution?

If so, does that mean that it's best to use the biggest batch size your machine can handle when training neural networks?

Any insight, references or info would be appreciated!

There is evidence that supports the proposition that it is best to use the biggest batch size your machine can handle. See e.g. Goyal et al. (2018).

It's complicated. We're trying to balance multiple effects. Yes, you are right in your reasoning as far as it goes, but there are other considerations as well.

Mathematical optimization favors larger batches, in some sense. One way to view training a neural network is as solving a mathematical optimization problem: namely, we're trying to find network weights that minimize the training loss. Gradient descent gives you some kind of approximation to the optimal solution. From that perspective, yes, if you fix the number of iterations of gradient descent, then the larger the batch size, the better the quality of the solution gradient descent finds (the lower the training loss). So, yes, from this perspective, what you write is absolutely correct.

Generalization favors smaller batches. It turns out there is another, subtler issue: generalization. It turns out that if you try as hard as you possibly can to find the optimal solution to the learning optimization problem (and in particular, run gradient descent for as long as you can stand to), neural networks tend to overfit to the training data and thus generalize poorly to other data. This is bad. There are various methods for combating overfitting, but one of the most fundamental methods used in neural networks is "early stopping": namely, we stop gradient descent early, before it has reached an optimal solution to the optimization problem. This is bit counter-intuitive, because it means that we are deliberately accepting a poorer solution to the optimization problem. It is surprising that it is beneficial to do so, but it turns out that early stopping acts as a form of regularization and helps the neural network generalize better. As far as I know it is an open question exactly why early stopping helps, but it does.

Summary. We are dealing with competing concerns. From the perspective of generalization and overfitting, it might be best to use a batch size of 1, or small batches. But this would make very inefficient use of GPUs, and would make training take prohibitively long. From the perspective of using your GPU fully and making training complete in a reasonable amount of time, we are incentivized to use a batch size large enough to fully utilize all of the GPU's parallel computing units. So, in practice, it's common to choose batch sizes somewhere around there.

so you have to understand that neural networks are used as 'computation-bound' statistical models. ie they are solving the problem how accurate can I get with a budget of X compute-hours.

reasoning with a mental model of modelling in under an hour will lead you astray.

minibatch is a tradeoff of stochasticity and iteration speed vs accuracy. you will be able to achieve more iterations in the same time if you have a smaller minibatch - iteration speed

(batch) gradient descent will get stuck in local minima. so some stochasticity is beneficial.

It might be useful to consider the extreme cases of mini-batch sizes: using a single sample vs taking all $N$ samples in one go. These are sometimes also referred to as on-line and batch learning, respectively.

For on-line learning (single sample), we could list the following properties (I am probably ignoring a lot here):

For batch learning ($N$ samples), on the other hand, we have

Conceptually, the on-line learning scenario is arguably more attractive. After all, we get much more updates out of a single pass through the data and generalisation performance should be better. The batch learning scenario, on the other hand, looks more promising in practice, because it can benefit from parallellisation, reducing run/waiting times. However, modern datasets can be so large that it has become impossible to use all data at once, which obviously cripples this argument.

In the end, the size of your mini-batches seems to be a trade-off between how long you want to wait for computations and how good you want your model to generalise. At least for small datasets.

If you are working with huge datasets, you will probably end up with mini-batches that consist of a collection of single samples for a subset of all possible classes. As a result, the gradients will be stochastic enough to provide generalisation benefits. Moreover, you might have to wait weeks instead of days if you don't take a sufficiently large batch size to finish a single pass through the data. Also, some architectures rely on a sufficiently large batch size to work properly (e.g. batchnorm, CLIP, ...)

TL;DR: it's a trade-off that probably depends on the size of the data.

Wait a minute... Who said that more updates is better?

If we use each sample exactly once in the on-line setting the $N$ updates should be roughly equivalent to the single update from the full-batch setting. Especially if the learning rate is small enough (i.e. the individual updates do not change the weights too much). 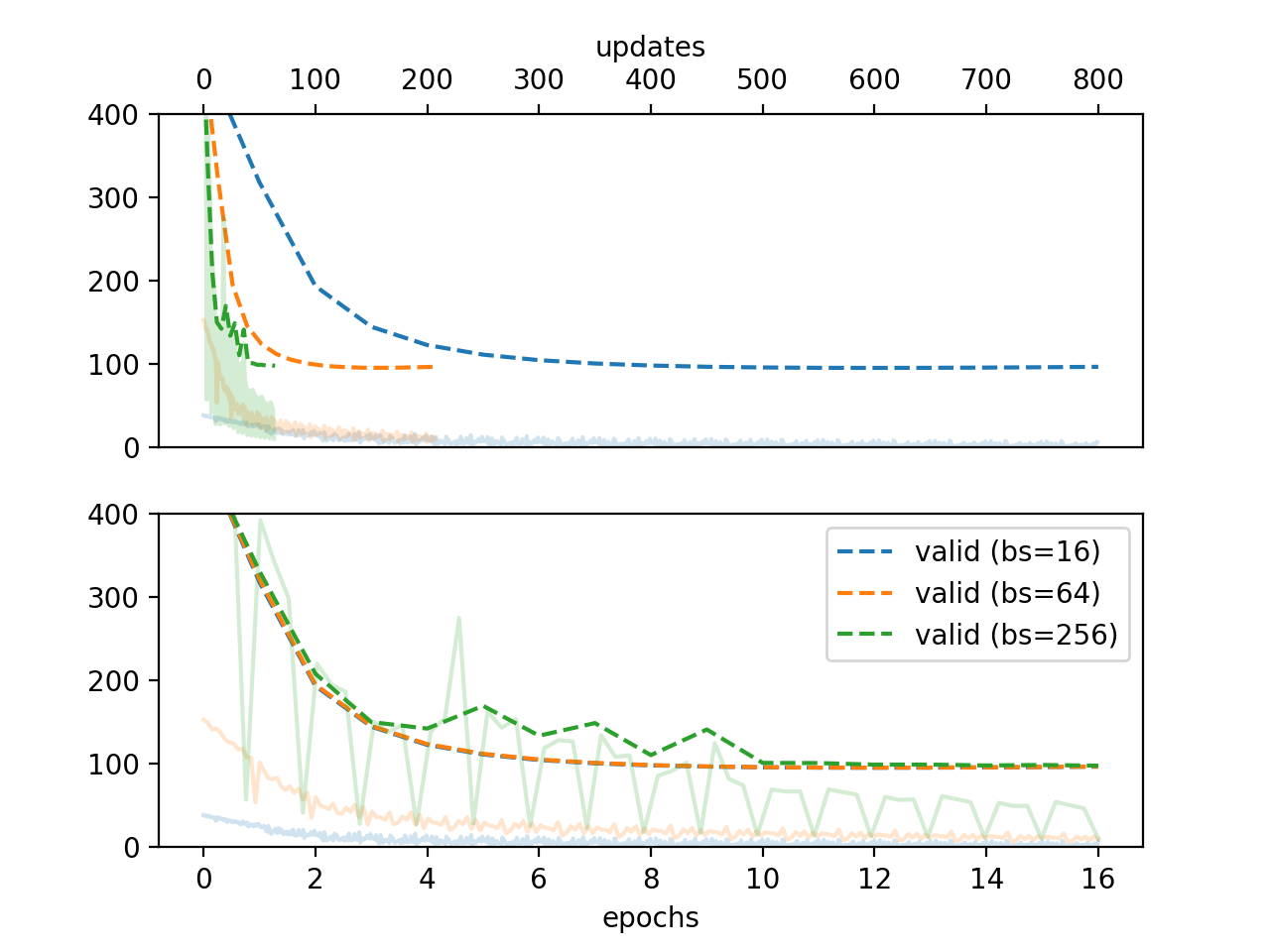 However, instead of optimising the sum of errors, it is actually more common to optimise the average error. This means that the update in the online setting remains the same, whereas the update for the full batch is reduced by a factor $N$:

In this case, the update in the full batch setting is much smaller (in the same scale as a single update in the online setting, if you want). This also means that more updates leads to better performance.

The figure below illustrates the learning curves when trained on the average error. Note that the performance depends on the number of updates (and not on the number of passes through the data). 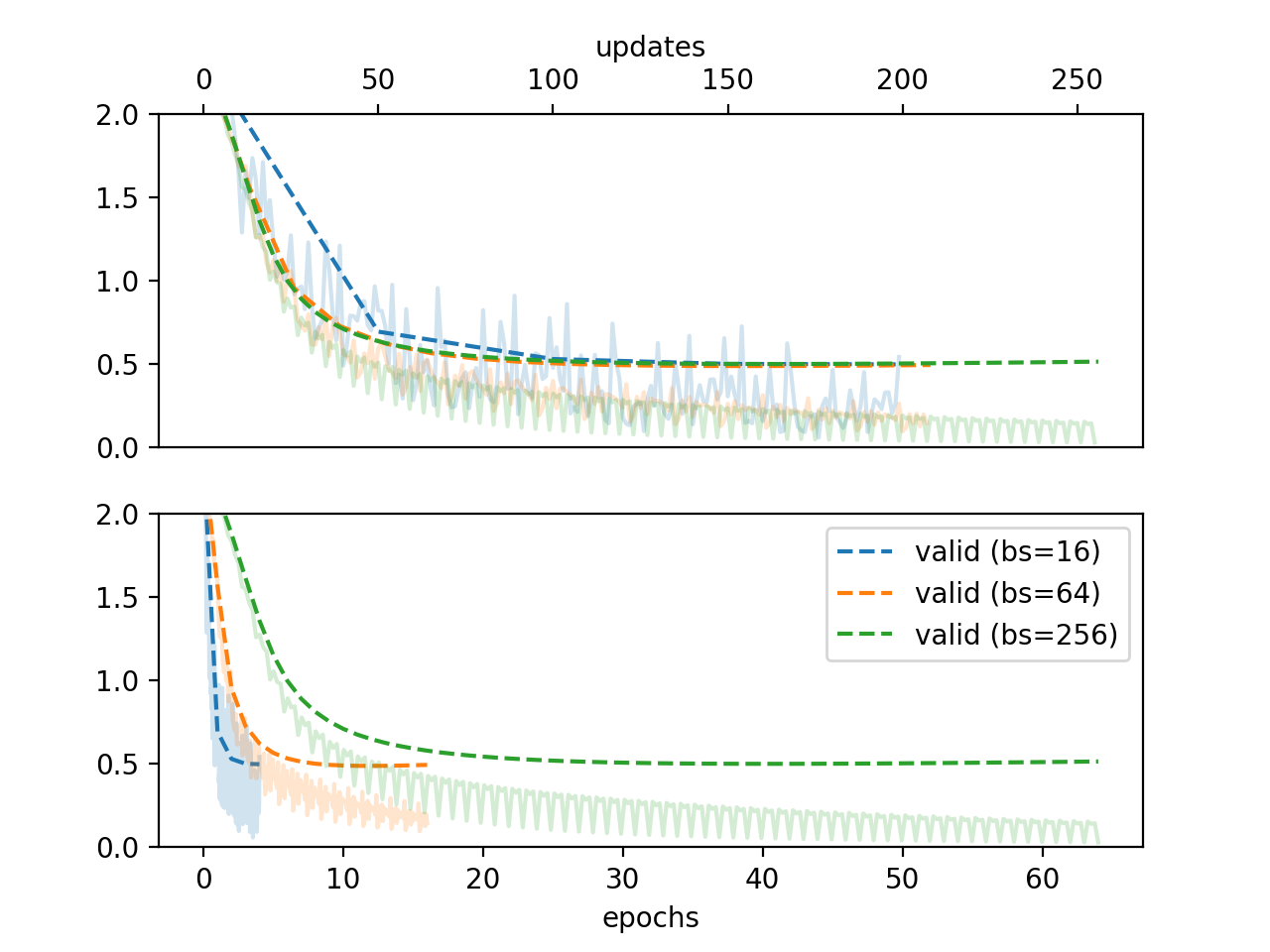 It is difficult to prove anything and many results assume some network architectures, unless you can use fit everything into 1 batch.

But from my experience, for small batch sizes relative to the dataset, you want smaller learning rate than when using larger batch sizes (intuitively, you want the general direction to be the sum of many small vectors). Problem is nobody knows what is small enough or large enough is, but we have general idea for some network architectures.

Furthermore, with many training algorithms, the learning rates can adapt and it can get really complex to prove anything.

To improve your training speed, do make batch size as large as possible unless you can fit your entire data into one batch, then breaking it down to mini batches may help you break out of the first local minimum you encounter. There is nothing, however, that guarantees that the other minimums are better than your first local minimum. It is an empirical result really...

16
How to set mini-batch size in SGD in keras
2
Should we add new gradient to it current value or to overwrite current gradient value with new during backpropagation phase in neural network?
18
Neural networks vs everything else
3
Neural Networks - Epochs with 10-fold Cross Validation - doing something wrong?
3
Train an ensemble of neural networks on different datasets, what is the best way to scale the inputs?
1
When do we train a neural network using full batch training?