I am in doubt whether in my thesis I should report on the subject specific predictions of the probability to respond with an 'I don't know' answer, or the population average. Consider for example the following graphs (I have not gotten them smaller yet): 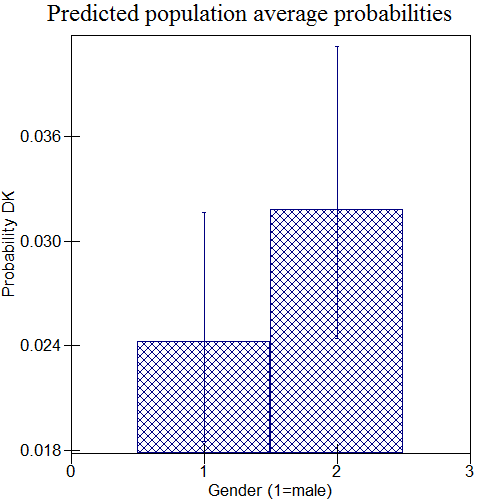 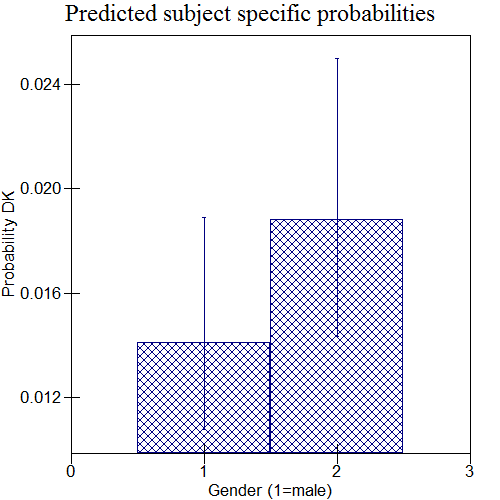 They both have the same conclusion that the probability doubles for females. However, in terms of frequencies this means on average in the population I will have 3.3% missingness for females and 2.5 for males. For the average female individual though (in the median clusters= interviewed by the median interviewer, in the median country), I will have 1.9% missingness and 1.5% for this average male individual. I think the population average is more informative for my cause: evaluate whether missingness is related to gender and whether the rates are problematic. However, reading the following passage (Allison, P D (2009) Fixed Effects Regression Models, Quantitative Applications in the Social Sciences Series, Sage, Thousand Oaks, California):

“if you are a doctor and you want an estimate of how much a statin drug will lower your patient’s odds of getting a heart attack, the subject-specific coefficient is the clear choice. On the other hand, if you are a state health official and you want to know how the number of people who die of heart attacks would change if everyone in the at-risk population took the stain drug, you would probably want to use the population–averaged coefficients. Even in the public health case, it could be argued that the subject-specific coefficient is more fundamental"

I can't seem to translate this to my specific situation. Anyone have any advice on my situation?

You cannot reach the conclusion that "the probability doubles for females". But your figures are a little misleading since the $y$-axes do not start from zero. It also seems that the percentages are just approximations from the figures.

We can always interpret regression coefficient as the association between $X$ and $Y$ on average.

Not the answer you're looking for? Browse other questions tagged mixed-model interpretation marginal-model or ask your own question.

11
Marginal model versus random-effects model – how to choose between them? An advice for a layman
3
Interpreting BLUPs or VarCorr estimates in mixed models?
1
Is a mixed effects model necessary, or can glm take into account repeated measures?

3
Mixed model specification with nlme in R
1
GEE Logistic Model with Subject Specific Predictions?
14
Kolmogorov–Smirnov test vs. t-test
2
Mixed Model Versus GEE estimates and which to use
1
Mixed model applied to transformed data, or paired t-test applied to subject-medians of untransformed (skewed) data?
1
GEE vs mixed model for time-varying covariate