Kernel density estimator that doesn't collapse in the tails

I have tried with simple Kernel density estimators, but the problem is that in my application I often need to evaluate the estimated density $\hat{f}(x)$ deep in the tails (say I need $\hat{f}(x)$ for $|x| >> 2\sigma$) and it looks like $\hat{f}(x)$ drops to zero very rapidly in the tails.

This image shows what I mean: 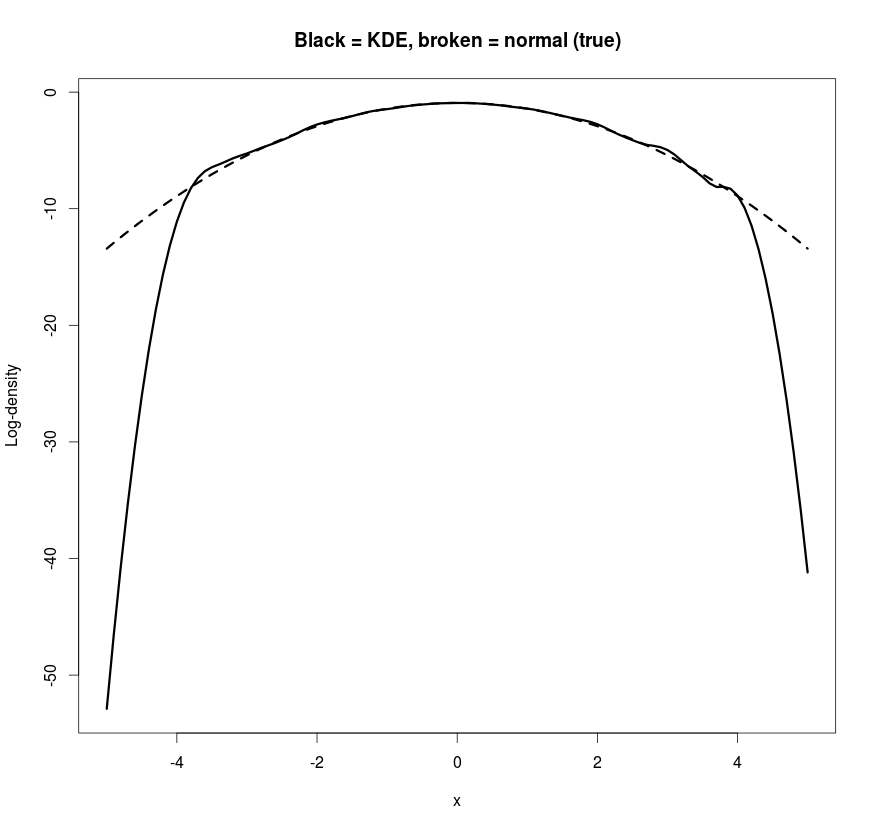 In this case the true density is really Gaussian, but in my application it is unknown. Obviously estimating tail probabilities is very difficult, but what I would like is a KDE that doesn't drop to zero so fast. In the literature I found a lot about fat-tailed kernels, but I'm not sure whether that's what I need. Thanks!

EDIT: One might ask "why do you need to evaluate the estimated density very far in the tails?". The answer is that I want to use this density to estimate a likelihood $f(x_0|\theta)$, where $x_0$ is an observation and $\theta$ is a unknown parameter. Given a set of parameters $\theta^0$ I simulate $n$ data-points $x_1,...,x_n$, estimate their density and use it to get an estimate of the likelihood $\hat{f}(x_0|\theta^0)$. Give that the real $\theta$ is unknown, when I initialize the algorithm at $\theta^0$ my sample can be very far from $x_0$ and hence I will evaluate the estimated density in the extreme tails.

I have a number of questions.

Why do you care about the tail of the distribution if you don't know where it is?

You have said that you would need to evaluate the density at x = 10 in your example. How many samples do you have? For KDE I am fairly certain you don't have enough for this. Looking at that part of the tail, we have

Your tail density will also be significantly affected by the bandwidth that you select for your KDE. If you make your kernel have bandwidth = 1, I bet your graph will look a lot nicer at the tails, but this is only due to the coincidence of the kernel having the same tail properties as the density of interest.

It may be a consequence of the way you have presented your example, but it looks like your density function has finite support (e.g, a truncated Gaussian)? If this is the case, why not use a spline density estimator with linear tails: http://cran.r-project.org/web/packages/pendensity/vignettes/pendensity.pdf

You could also have a look into wavelet density estimation: http://cran.r-project.org/web/packages/wavethresh/wavethresh.pdf

I'm not sure about the suggestion of using a logspline? Surely this will have by construction exponential (fast decaying) tails?

Not the answer you're looking for? Browse other questions tagged nonparametric density-function kernel-smoothing smoothing or ask your own question.