Why is Neyman-Pearson lemma a lemma or is it a theorem?

A classical result in statistical theory is the Neyman-Pearson lemma, which not only shows the existence of tests with the most power that return a pre-specified level of Type I error, but also a way to construct such tests.

If this powerful result is a lemma, then what eventual result was this used for in the original works of Neyman & Pearson?

As Thomas Lumley asserted, Neyman and Pearson in $\rm [I]$ didn't mention lemma. They frequently used the word principle, basis while deducing the critical regions in various cases.

When was the first time it was marked as a lemma?

$\bullet$ Wilks in his book did outline the theory but again refrained from calling it as lemma.

$\bullet$ Cramér in his book never mentioned any lemma but explained the "basic idea of Neyman-Pearson theory".

$\bullet$ Lehmann termed it while "formaliz[ing] in the following theorem, the fundamental lemma of Neyman and Pearson".

$\bullet$ Kendall & Stuart did use the term while writing "the examples we have given so far of the use of the Neyman-Pearson Lemma ..." the "lemma due to Neyman and Pearson ..."

$\bullet$ In $\rm [VI],$ the authors detailed a Lemma, which would be the more familiar Generalized NP Lemma we are acquainted with.

Again with absolute certainty, I cannot ascertain whether this was the first time the word was introduced. But as of now, it seems.

What people often describe as the Neyman Pearson lemma is a result proven by the lemma but not the lemma itself. The description of the lemma by cross validated is for instance:

However, the lemma is a more abstract and technical underlying result.

This Lemma is not only applied to the case of likelihood ratio tests but also to find optimal (most powerful) critical regions of other types.

Probably the first occurrence is in 1933. A proof for the lemma is given but it is not yet explicitly named as a lemma or theorem.

Neyman, Jerzy, and Egon Sharpe Pearson. "IX. On the problem of the most efficient tests of statistical hypotheses." Philosophical Transactions of the Royal Society of London. Series A, Containing Papers of a Mathematical or Physical Character 231.694-706 (1933): 289-337. 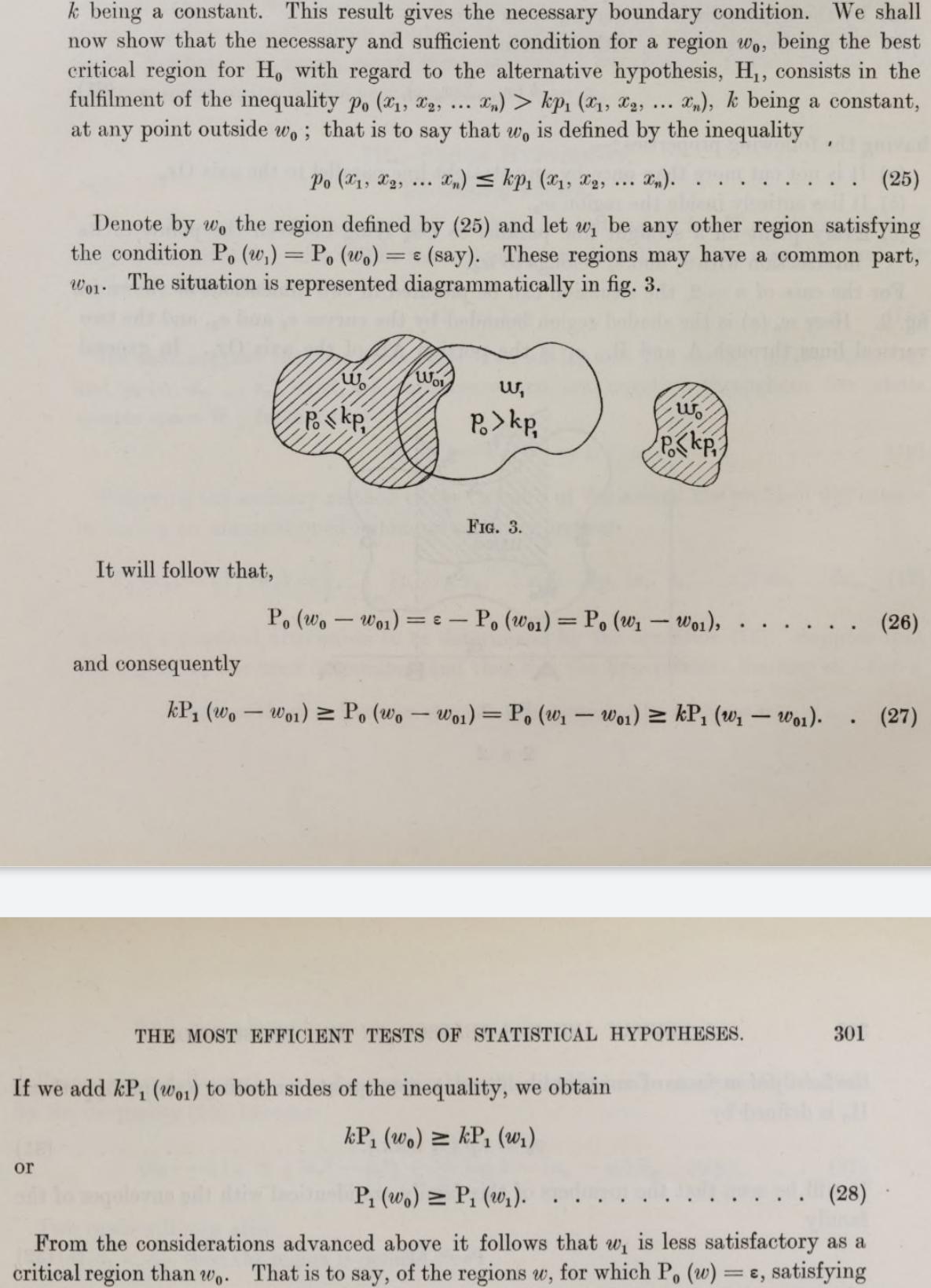 An early reference to the lemma occurs in 1935. It is in French and doesn't yet speak of a lemma, but it speaks of a general result (résultat général). It is actually not referencing the 1933 article, and it is referencing the future article in 1936 (with the remark 'in press') 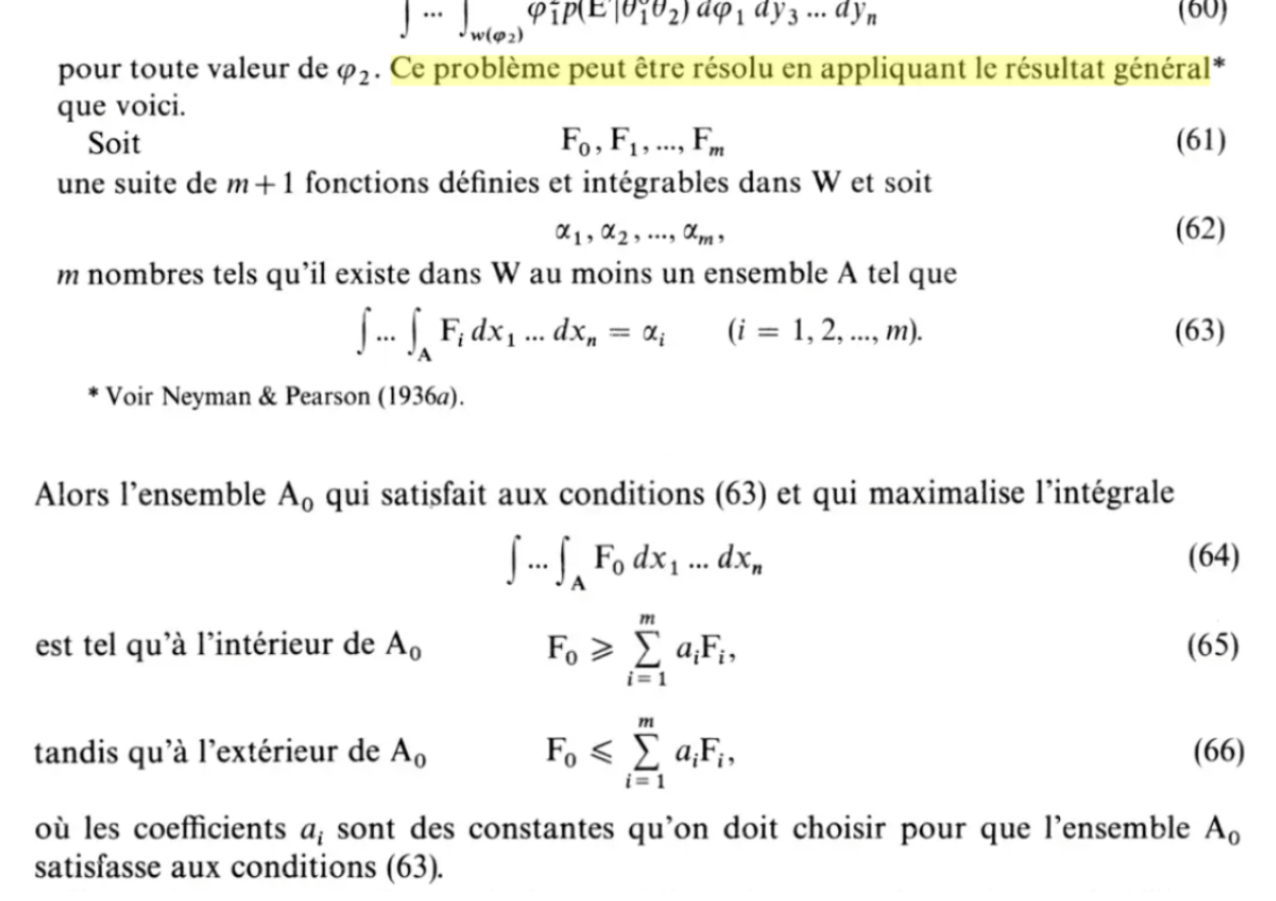 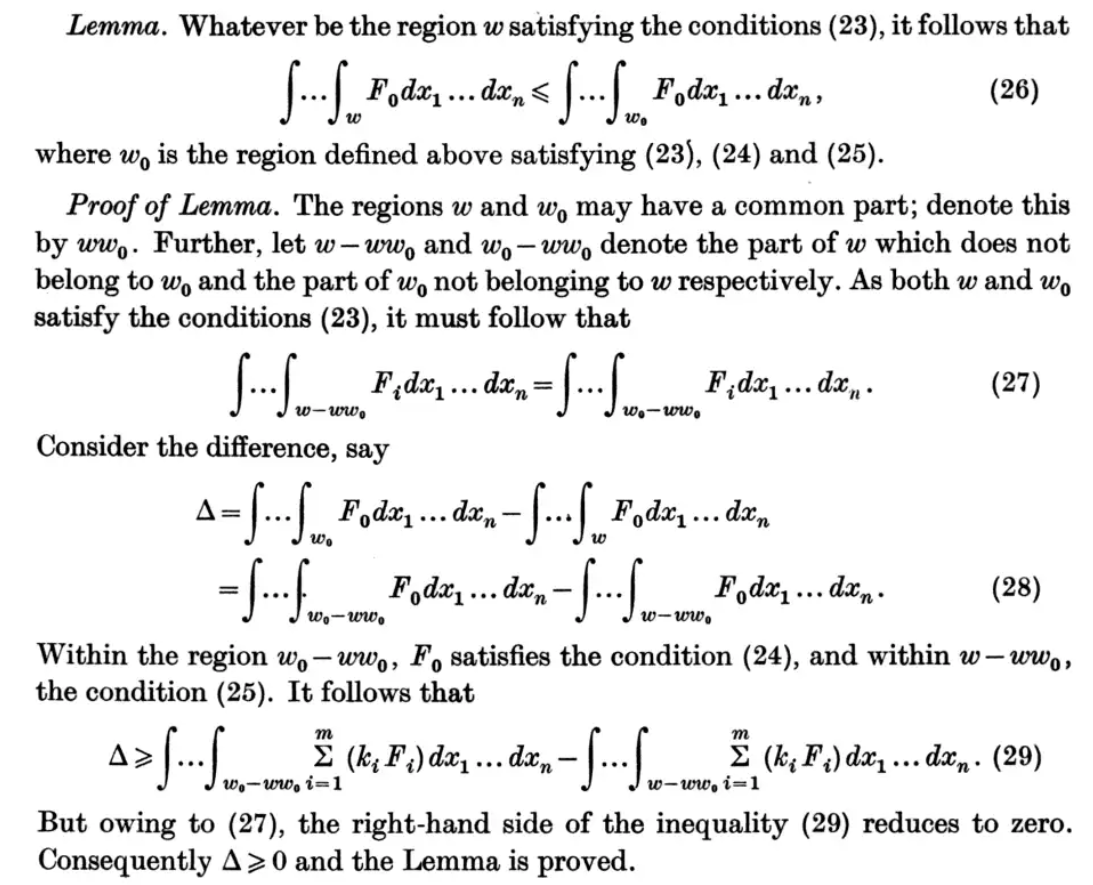 In 1939 Wald speaks about a general principle in a theory. Here it is not anymore about a lemma used in a theorem. Possibly this could be the start where the meaning of the lemma started to switch to the statement about the optimal power for likelihood ratio tests?

Wald, Abraham. "Contributions to the theory of statistical estimation and testing hypotheses." The Annals of Mathematical Statistics 10.4 (1939): 299-326.

In the Neyman-Pearson theory two types of hypotheses are considered. Let $\theta =\theta_1$ be the hypothesis to be tested, where $\theta_1$ denotes a certain point if the parameter space. Denote this hypothesis by $H_1$ and the hypothesis $\theta \neq \theta_1$ by $\bar{H}$. The type I error is that which is made by rejecting $H_1$ when it is true. The type II error is that which is made by accepting $H_1$ when it is false. The fundamental principle in the Neyman-Pearson theory can be formulated as follows: Among all critical regions (regions of rejection of $H_1$, i.e. regions of acceptance of $\bar{H}$) for which the probability of type I error is equal to a given constant $\alpha$, we have to choose that region for which the probability of type II error is a minimum.

11
Why is the Neyman-Pearson lemma a lemma and not a theorem?

23
Neyman-Pearson lemma
0
Proof of Neyman Pearson Lemma
1
randomized Neyman-Pearson lemma for a discrete distribution
1
Does there always exist for n small, a non-chi-squared test-statistic for the likelihood-ratio (neyman-pearson, karlin-rubin), score, and wald-tests?