Probability of reaching a threshold after several trials

I was wondering if there wasn't some better way to get to the bottom of this question I had regarding the chances of reaching a certain threshold of guessing numbers correctly over a series of trials. This isn't my specialty, so would appreciate answers that are like you were talking to a 5 year old or at least google-able :)

So say I have a game where I have to pick 10 out of 80 numbers and then 20 are drawn. For each one of my Picks that is chosen as one of the 20 I get a black marble.

I need to know the odds that if I can get AT LEAST 20 black marbles in 5 games, picking 10 numbers each game. Each game is discrete in that the picked numbers are replaced and the 20 numbers that are drawn are totally random

Here's how I would do this by hand if I had to (this is the part I'd like to simplify / correct my assumptions on!!):

Find each permutation of black marbles (0-10) I could win for each of the 5 games without regard to order.

Filter each permutation so that if the set of 5 games does not sum to 20 it is discarded
For the remaining sets find and multiply the HYPGEOMDIST for each of the 5 games in each set, then sum every set

Please excuse me if this has been asked somewhere else, I am unfamiliar with the terminology in order to search well enough on this site.

You have correctly identified that your problem is one of convolution of hypergeometrics.

Your two simplest choices appear to be either:

So let's try them:

(Calculation details omitted - I did it in R using the convolve function, though it could be done with fft and its inverse or filter as well, but they're all a bit fiddly. In this case it's probably easier to just do it directly as a calculation on the vector of probabilities.)

This is what the probability function of the convolution looks like: 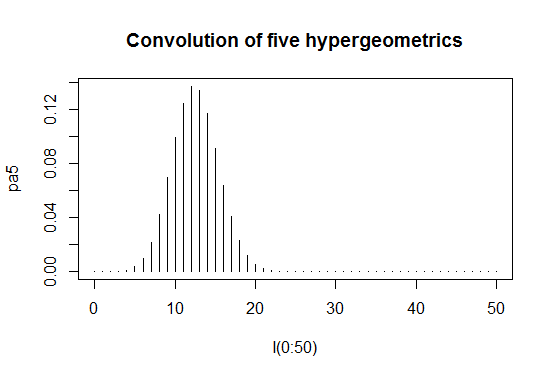 The probability of getting $\geq 20$ on that p.f. is 0.009385. This is 'exact' to the numerical accuracy of the convolution (which should be to more than the number of figures I quoted, so the quoted figures should be accurate).

Here's the same graph with the p.f. of the hypergeometric and the convolution of 5 of them computed in Excel, in this case by repeated use of the SUMPRODUCT function. The answers are of course the same: 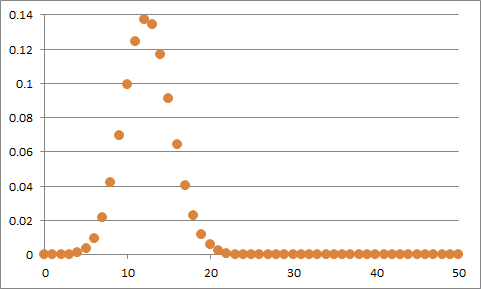 2. Normal approximation. Since it turns out (as we see from 1.) that we're quite far out in the tail, this won't be very accurate. But let's go ahead and try it:

The z-value cutoff itself here is enough to hint to us that the approximation may not be very accurate.

(While not terrible accurate, the uncorrected version is significantly less accurate in this case, having about half the required probability.)

Given that the numerical convolution isn't all that much harder than this inaccurate approximation, in this case, it's worth the additional effort.

An alternative approximation that is often used is the binomial approximation to the hypergeometric; the usual one would take $n=10$ and $p=0.25$. In this case, that's quite convenient because the convolution of them will also be binomial (with $n=50$ and $p=0.25$); however, it tends to be inaccurate when you sample more than about 5-10% of the population, and in this situation it's a lot more than that, so we would anticipate that it won't be very good. Further, the usual form overestimates the variance (since it ignores the 'without replacement' aspect). In this case it yields a probability about 50% too high.

However, as Brunk et al.$^{(1)}$ point out, since several of the hypergeometric parameters can be interchanged without changing the probabilities, there are actually four quite natural binomial approximations to the hypergeometric, and they discuss another reference that says the one with the smallest "n" for the binomial is generally the best approximation. Brunk et al. give a detailed analysis which broadly seems to back this simple advice up.

In their notation, the total population is $N$, there are $M$ items in the population with the characteristic of interest and there are $n$ in the sample (i.e. my $K$ above is their $M$ and my $k$ is their $x$), then:

where $0 \leq x \leq \min(M,n)$ and the usual binomial approximating probability is

Since in the hypergeometric, $n$ and $M$ can be interchanged, as can the roles items-of-interest and items-not-of-interest,

leading to four binomial approximations to those probabilities:

In our situation, $N=80$, $M=20$ and $n=10$, so the four "sample sizes" are minimized by taking the first approximation, the one we already considered; this suggests we likely can't do better with the usual forms of binomial approximation.

An alternative possibility for a binomial approximation, since the probabilities are essentially zero near the maximum is to forget sticking to the given $n$ and instead choose $n$ and $p$ so as to approximately match the first two moments:

With the smallest percentage error on the middle one, though the $n=8$ one is also "close". Nevertheless, the accuracy is not particularly good, though much better than our other approximations.

Not the answer you're looking for?Browse other questions tagged probability or ask your own question.

3
Probability of Game Outcomes (with ties!)
9
Does it matter how you sample a population?
13
How can I predict the odds that a dodgeball team is going to win based on the winning history of its players?
5
Statistics of 7 game playoff series
1
Probability - expected value and variance
2
Efficiently computing poisson binomial sum
3
How to calculate the probability that white will win a chess game?
0
A multinomial problem has been solved programmatically, could someone please give a hint about how to solved it mathematically?