The F-test in ANOVA is an example of an omnibus test, which tests the overall significance of the model. Significant F test means that among the tested means, at least two of the means are significantly different, but this result doesn't specify exactly what means are different one from the other. Actually, testing means' differences has been made by the quadratic rational F statistic ( F=MSB/MSW). In order to determine which mean differ from another mean or which contrast of means are significantly different, Post Hoc tests (Multiple Comparison tests) or planned tests should be conducted after obtaining a significant omnibus F test. It may be consider using the simple Bonferroni correction or other suitable correction.

So an omnibus test is used to test the overall significance, while multiple comparison is to find which differences are significant.

The purpose of of multiple comparisons procedures is not to test the overall significance, but to test individual effects for significance while controlling the experimentwise error rate. It's quite possible for e.g. an omnibus F-test to be significant at a given level while none of the pairwise Tukey tests are—it's discussed here & here.

Consider a very simple example: testing whether two independent normal variates with unit variance both have mean zero, so that

(using the Sidak correction to maintain overall size). Both tests have the same size ($\alpha$) but different rejection regions: 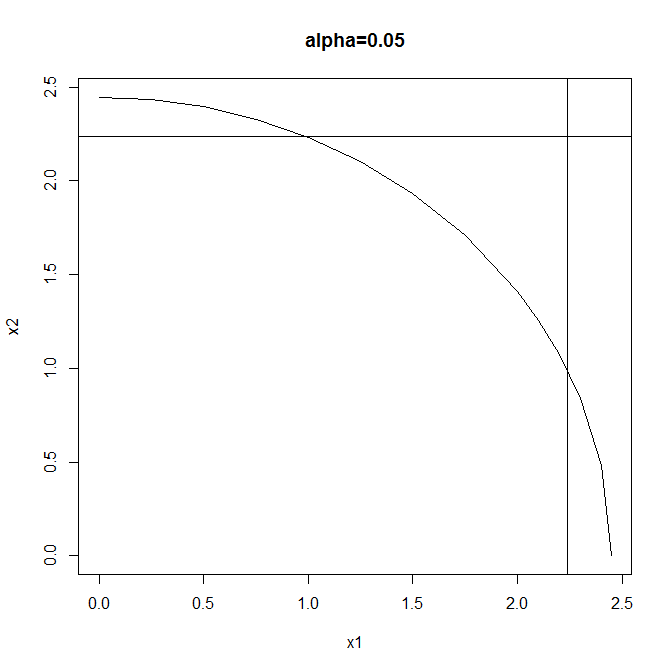 So two valid test procedures that control the experimentwise error rate at $\alpha$ are these:

You can't have your cake & eat it by performing Test #1 & not rejecting the global null, yet still going on to perform Test #2: the Type I error rate is greater than $\alpha$ for this procedure.

When testing m hypotheses, there are $2^m$ combinations of hypothesis one can test. One of them is the "global null" hypothesis, a.k.a. the "intersection hypothesis": $\cap H_i^0$.

An omnibus test is typically a name for testing the global null hypothesis. A bare minimum requirement of a multiple testing procedure, is error control under the global null. This is known as "weak FWER" control. But you will probably not stop there- for the purpose of inference on particular hypotheses, you will want a procedure which offer FWER control under any combination of true nulls. This is known as "strong FWER" control.

In addition to the computations associated with Pair-Wise tests, there is something else why ANOVA is used instead of doing all the PAIR-WISE tests.

Sometimes, it is possible that while ANOVA rejects the null hypothesis that all the population means are same at some confidence level, yet if you take all the pair-wise tests (say LSD) you may not find even at least one pair of means which exceeds the difference at that confidence level. 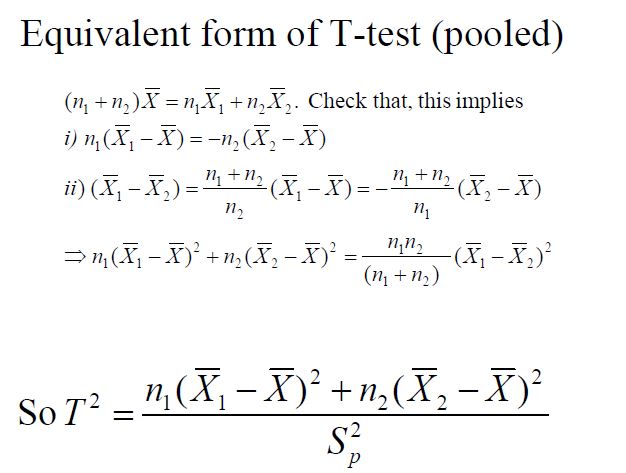 here: $S_p$ is the within squares standard deviation.

After dividing by $(N-1)$ (as it is the DoF)and squaring on both sides:

Hence, ANOVA contains more information than in all the pair wise tests considered together.

P.S: Apologies for using the image instead of typing out the equations.

3
Difference between one-way ANOVA and all pairwise comparisons with Bonferroni correction
66
Do we need a global test before post hoc tests?
21
Why use ANOVA at all instead of jumping straight into post-hoc or planned comparisons tests?
3
Differences between summary and anova function for multilevel (lmer) model
2
How to find significant difference in a group/ ANOVA
1
Can Fisher's LSD fail to identify difference when the overall ANOVA test rejects?
1
ANOVA result indicated that there were sig. differences while Tukey post-hoc test revealed that there were no statistically sig. differences
2
Why do we conduct one-way ANOVA instead of jumping right into multiple comparisons if we have a simple, single main effect dataset?
1
Multiple comparison on subgroups and overall comparison
1
Multiple hypothesis testing of same hypothesis
See more linked questions