I have seen several ways to write (and calculate and interpret) a survivor function in discrete time survival analysis and I wonder which is correct or if they both are, but the interpretation and/or setup of the problem is different and I am missing it.

Here is an example.

The following hazards, h(t), are calculated.

For example, a customer opens and closes in the same month with probability 0.019194.

Question: What is the proper way to construct the survivor function?

In the continuous case, I guess it doesn't matter between Pr(T>t) and Pr(T>=t), but in the discrete case it does. 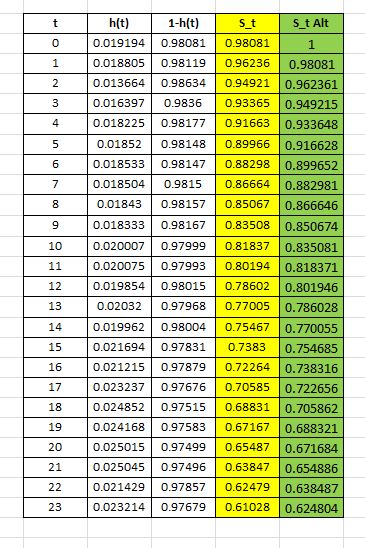 The answer is that both are used, unfortunately. In the continuous case, you are right the distinction is unimportant. In the discrete case, the interpretation would be slightly different and therefore clarity is important.

An important note is that the survival function should start with $S(0) = 1$ if 0 is the first time point, in the absence of left censoring (i.e. assuming no one starts follow-up already having had the event). In the case of your example, I presume that someone who opens and closes a bank account in January 2012 opens the account before they close it; so if time intervals were shortened (for example using weeks or days as the time scale) then S(0) would equal 1 in both cases.

In addition, in many applications we are interested in comparing hazards or survival between two groups rather than the absolute survival or hazard in a specific group. In this case, I think the distinction should be even less important, but I would have to check into that to be sure.

For more detail, with $S(t) = Pr(T>=t)$, see: Collett: Modelling Survival Data in Medical Research, 2nd ed. (note, most of the analytic details will be the same as in Allison, but the interpretations may differ)

Not the answer you're looking for? Browse other questions tagged survival discrete-data hazard or ask your own question.