This produces a distribution of positive r values. Traditionally we have converted this distribution to z-scores using (in MATLAB):

I'm pretty sure this is the "correct" calculation, although I am suspicious it is inappropriate because the r values are not normally distributed (fails the KS test, as well). Next, we convert to p-values using:

My question is, will the above calculation give you incorrect p values if your r values are not drawn from a normal distribution? I'm running into some resistance from higher-ups, but I'm pretty sure that this is wrong. 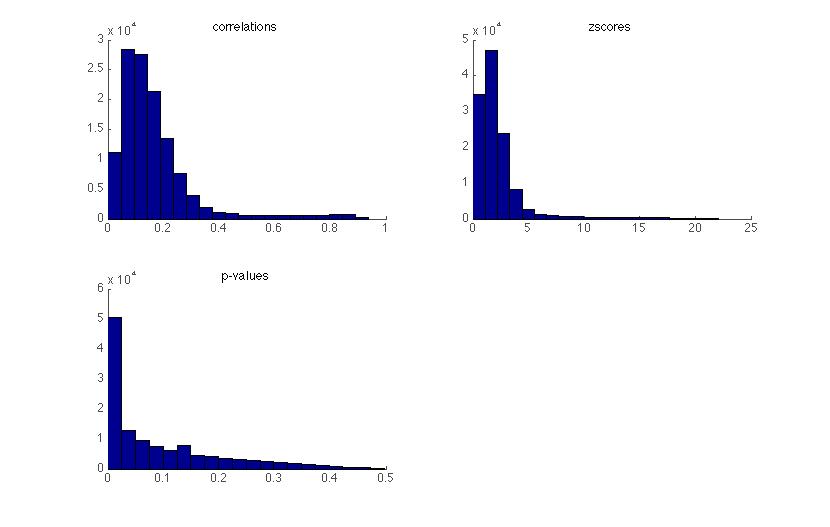 Would I be right to say that 'normcdf' is responsible for the enormous number of highly significant items? Is there a way to directly identify p values from an arbitrary distribution? Due to the incredible skew in the distribution of p values, most multiple-comparison correction procedures produce rather liberal p-thresholds.

It looks like the problem is that your null hypothesis is on the boundary of your parameter space.

This is intended to complement the nice answer from Paul, not contradict it.

The simplest theory for estimating correlation (indeed anything) is to postulate that there is one unknown constant value, and each sample provides an estimate of that.

There seems a kind of hint in your posting that correlation might vary any way. If that's true the usual kind of target is itself a distribution, and the right kind of treatment will vary too.

Regardless of that, the crucial thing is not so much how many correlations you have (although 12000 is good) but on what sample size each is based. As Paul did flag, the standard results are asymptotic, and the folklore seems to be that that's not to be understated: convergence is not fast.

Not the answer you're looking for? Browse other questions tagged r distributions matlab normality-assumption p-value or ask your own question.