However, this may not be the best answer. Let me explain it.

When we are doing a regression, we have estimates $\{d_i\}$ for the standard deviations of the coefficients $\{c_i\}$ and it may turn out, in my particular problem, that most of these coefficients have low $t$-values.

On the other hand, in my problem, I already know the underlying model is more like

(The reason for this strange phenomenon is, my $\{x_i\}$ have significant correlations with each other.)

It seems that I can solve the model

(This response picks up where @AVB, who has provided useful comments, left off by suggesting we need to figure out which differences $X_i - X_j$ ought to be included among the independent variables.)

The big question here is what is an effective method to identify the model. Later we can worry about faster methods. (But regression is so fast that you could process dozens of variables for millions of records in a matter of seconds.)

Let's begin by establishing that this simulation emulates the stated problem. Here is a scatterplot matrix. 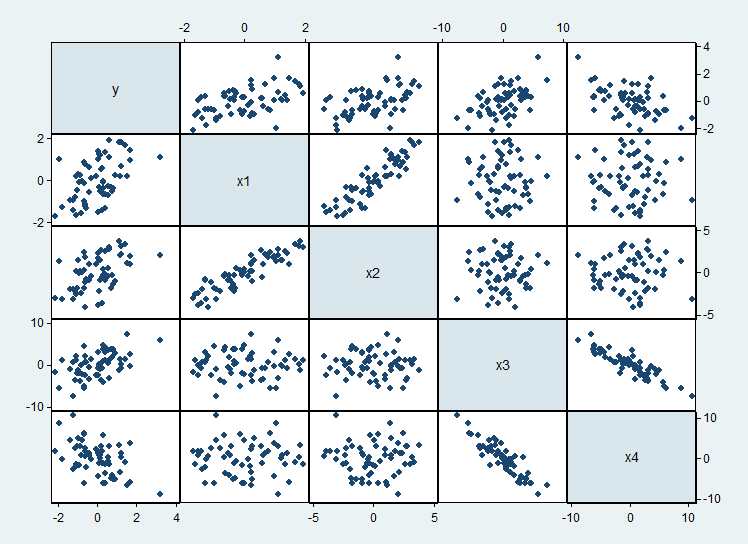 Here is my proposal: systematically combine variables in pairs (six pairs in this case, 36 pairs for nine variables), one pair at a time. Regress a pair along with all remaining variables, seeking highly significant results for the pairs.

What is a "pair"? It is the linear combination suggested by the estimated coefficients. In this case, they are

In general, with $\hat{\beta}_i$ representing the estimated coefficient of $X_i$ in this full regression, the pairs are defined by

This is so systematic that it's straightforward to script.

The "identification regressions" are the model

along with the five additional permutations thereof, one for each pair.

You are looking for results where $X_{ij}$ becomes significant: ignore the significance of the remaining $X_k$. To see what's going on, I will list the results of all six identification regressions for the simulation. As a shorthand, I list the variables followed by a vector of their t-values only:

(In general, we would also include--provisionally--any remaining $X_i$ not participating in any of the pairs. There aren't any in this case.)

The regression results are

Translating back to the original $X_i$, the model is

(The last line shows how this all relates to form of the original question.) That's exactly the form used in the simulation: $Z_1$ and $Z_2$ enter with the same coefficient and $Z_3$ and $Z_4$ enter with opposite coefficients. This method got the right answer.

I want to share a cool observation in this regard. First, here's the scatterplot matrix for the model. 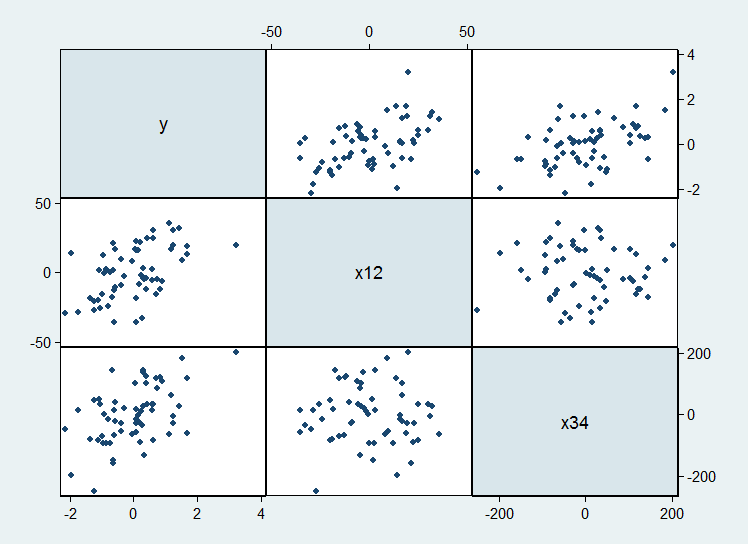 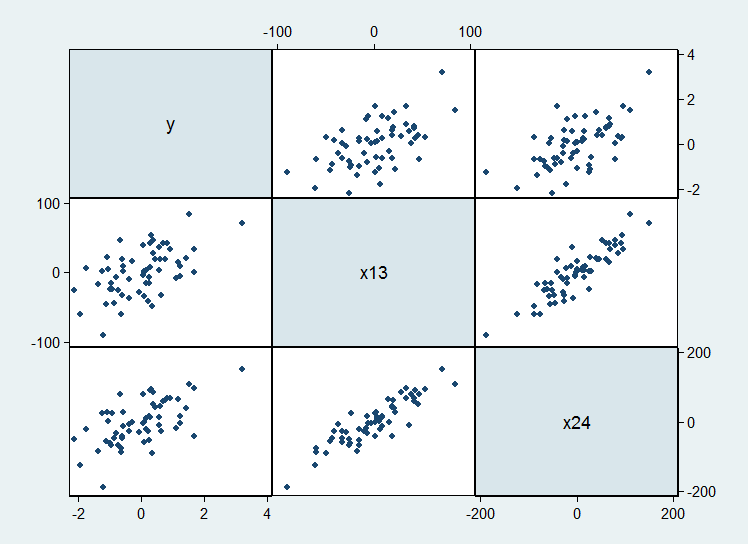 Clearly $X_{13}$ and $X_{24}$ are strongly correlated. But, even though this is the wrong model, $Y$ is also visibly correlated with these two variables, much more so than in the preceding scatterplot matrix!

This insight shows why we might want to systematically perform the "identification regressions" I have proposed, rather than using graphical methods or attempting to combine many of the pairs in one model. Each identification regression assesses the strength of the contribution of a proposed linear combination of variables (a "pair") in the context of all the remaining independent variables.

Note that although correlated variables were involved, correlation is not an essential feature of the problem or of the solution. Even where you don't expect the original variables $X_i$ to be strongly correlated, you could expect a model to have (unknown) linear constraints among the variables. That is the important issue to cope with. The presence of correlation only means that it can be problematic to identify such pairs solely by inspecting the original regression results.

Following the procedure I have proposed does not guarantee you will find a unique solution. It's conceivable, for instance, that you will find so many highly significant pairs that they are linearly dependent, forcing you to select among them by some other criterion. Nevertheless, the results you get ought to limit the sets of pairs you need to examine; they can be obtained with a straightforward procedure without intervention; and--if this simulation is any guide--they have a good chance of producing effective results.

You can not use the 36-coefficient model, and not because it's going to be slow. Speed is the least of your worries here.

The real trouble is that you've taken an already under-determined problem (because of the correlations), and converted it into a problem which is severely under-determined for any data, because of linear dependencies. Simply put, $x_1-x_2=(x_1-x_3)-(x_2-x_3)$, so you can only determine 2 out of the 3 coefficients for these terms in the best case. The only way to fix this will be to prescribe some artificial regularization condition, like having minimal $\sum c_i^2$, or whatever may be right in your case.

It seems to me that you might be better off if you start by analyzing the correlation matrix and first figuring out which terms of the form $c_i-c_j$ should really appear in your problem.

4
Missing factor levels after logistic regression glm()
1
Optimization based on regression result
8
How to Choose Activation Functions in a Regression Neural Network?
0
Can I get the relationship between my independent variables using linear regression?
2
How can I add minimum and maximum constraints to a coefficient in a regression in R?
1
Coefficient of multiple correlation for multiple linear regression with degree > 2 and interaction terms
2
Feature standardization for polynomial regression with categorical data