I have a dataset of sample observations, stored as counts within range bins. e.g.:

Now, finding an estimate of the average from this is pretty straight forward. Simply use the mean (or median) of each range bin as the observation and the count as a weight and find the weighted average:

My question now is, what's the correct method of finding the standard deviation (or variance)?

Through my searching, I've found several answers, but I'm unsure which, if any, is actually appropriate for my dataset. I was able to find the following formula both on another question here and a random NIST document.

Which gives a standard deviation of 8.35 for my test case. However, the Wikipedia article on weighted means gives both the formula:

Which give standard deviations of 8.66 and 7.83, respectively, for my test case.

Thanks to @whuber who suggested looking into Sheppard's Corrections, and your helpful comments related to them. Unfortunately, I'm having a difficult time understanding the resources I can find about it (and I can't find any good examples). To recap though, I understand that the following is a biased estimate of variance:

I also understand that most standard corrections for the bias are for direct random samples of a normal distribution. Therefore, I see two potential issues for me:

So, my updated question is; What's the appropriate method for handling the bias imposed by the "simple" weighted standard deviation/variance formula on a non-normal distribution? Most specifically with regards to binned data.

This reply presents two solutions: Sheppard's corrections and a maximum likelihood estimate. Both closely agree on an estimate of the standard deviation: $7.70$ for the first and $7.69$ for the second (when adjusted to be comparable to the usual "unbiased" estimator).

They are derived from the Euler-Maclaurin sum formula, which approximates integrals in terms of linear combinations of values of the integrand at regularly spaced points, and therefore generally applicable (and not just to Normal distributions).

Although strictly speaking a Normal distribution is not supported on a finite interval, to an extremely close approximation it is. Essentially all its probability is contained within seven standard deviations of the mean. Therefore Sheppard's corrections are applicable to data assumed to come from a Normal distribution.

The first two Sheppard's corrections are

Where does $h^2/12$ come from? This equals the variance of a uniform variate distributed over an interval of length $h$. Intuitively, then, Sheppard's correction for the second moment suggests that binning the data--effectively replacing them by the midpoint of each bin--appears to add an approximately uniformly distributed value ranging between $-h/2$ and $h/2$, whence it inflates the variance by $h^2/12$.

Let's do the calculations. I use R to illustrate them, beginning by specifying the counts and the bins:

The proper formula to use for the counts comes from replicating the bin widths by the amounts given by the counts; that is, the binned data are equivalent to

Their number, mean, and variance can be directly computed without having to expand the data in this way, though: when a bin has midpoint $x$ and a count of $k$, then its contribution to the sum of squares is $kx^2$. This leads to the second of the Wikipedia formulas cited in the question.

An alternative method is to apply a maximum likelihood estimate. When the assumed underlying distribution has a distribution function $F_\theta$ (depending on parameters $\theta$ to be estimated) and the bin $(x_0, x_1]$ contains $k$ values out of a set of independent, identically distributed values from $F_\theta$, then the (additive) contribution to the log likelihood of this bin is

Summing over all bins gives the log likelihood $\Lambda(\theta)$ for the dataset. As usual, we find an estimate $\hat\theta$ which minimizes $-\Lambda(\theta)$. This requires numerical optimization and that is expedited by supplying good starting values for $\theta$. The following R code does the work for a Normal distribution:

Remember, though, that for Normal distributions the maximum likelihood estimate of $\sigma$ (when the data are given exactly and not binned) is the population SD of the data, not the more conventional "bias corrected" estimate in which the variance is multiplied by $n/(n-1)$. Let us then (for comparison) correct the MLE of $\sigma$, finding $\sqrt{n/(n-1)} \hat\sigma = \sqrt{11/10}\times 7.33 = 7.69$. This compares favorably with the result of Sheppard's correction, which was $7.70$.

To visualize these results we can plot the fitted Normal density over a histogram: 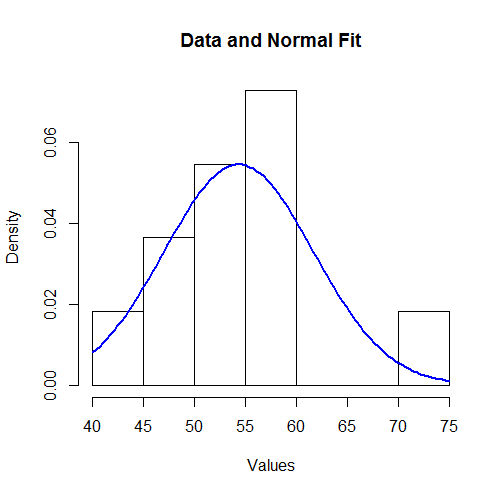 To some this might not look like a good fit. However, because the dataset is small (only $11$ values), surprisingly large deviations between the distribution of the observations and the true underlying distribution can occur.

Let's more formally check the assumption (made by the MLE) that the data are governed by a Normal distribution. An approximate goodness of fit test can be obtained from a $\chi^2$ test: the estimated parameters indicate the expected amount of data in each bin; the $\chi^2$ statistic compares the observed counts to the expected counts. Here is a test in R:

The software has performed a permutation test (which is needed because the test statistic does not follow a chi-squared distribution exactly: see my analysis at How to Understand Degrees of Freedom). Its p-value of $0.245$, which is not small, shows very little evidence of departure from normality: we have reason to trust the maximum likelihood results.

Not the answer you're looking for? Browse other questions tagged variance standard-deviation weighted-sampling or ask your own question.

1
How to calculate the mean from bin endpoints and frequencies?
0
Calculate the arithmetic average and standard deviation of a survey response
0
How do I get the sample mean and standard deviation?
0
Increase in variance due to grouping
1
How to calculate mean and variance correctly when data is in frequency "bins"?
320
How to understand degrees of freedom?
35
How do I calculate a weighted standard deviation? In Excel?
7
Is it valid to derive a mean from categorical data?
9
How to find average and median age from an aggregated frequency table
8
MLE/Likelihood of lognormally distributed interval
See more linked questions

4
Taking equipment precision into standard deviation
3
SE of weighted mean
6
How to estimate the (approximate) variance of the weighted mean?