I am reviewing the R package OpenMx for a genetic epidemiology analysis in order to learn how to specify and fit SEM models. I am new to this so bear with me. I am following the example on page 59 of the OpenMx User Guide. Here they draw the following conceptual model: 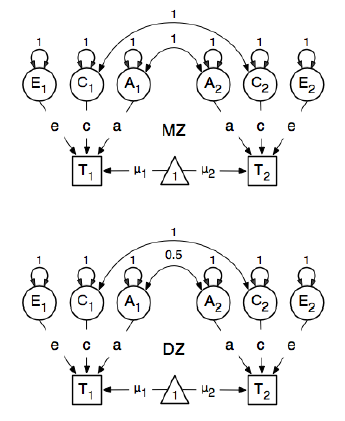 And in specifying the paths, they set the weight of the latent "one" node to the manifested bmi nodes "T1" and "T2" to be 0.6 because:

The main paths of interest are those from each of the latent variables to the respective observed variable. These are also estimated (thus all are set free), get a start value of 0.6 and appropriate labels.

The value of 0.6 comes from the estimated covariance of bmi1 and bmi2 (of strictly monozygotic twin pairs). I have two questions:

To answer your 2 points:

1) Yes, exactly--the starting value is merely dictating where the algorithm will start the optimization process. Most software packages actually determine their own starting value by default, and the user needs to try inputting different values only when problems occur during estimation. From my experience, most plausible starting values will do, and will not change the final model on which the algorithm converges.

As for the specific value "0.6": I could not find in the documentation where they mention taking this value based on the monozygotic twins subgroup; and actually, these parameter estimates (factor loadings for the 3 latent variables) cannot be directly computed from the sample, since by definition, these latent variables are unobserved (they are latent). As I mention in point #1, rarely will the choice between two plausible values affect the parameter estimates of the converged model, so my guess is that they simply chose one of many plausible values for these factor loadings as starting values. Whether this value does come from the estimated covariance between bmi1 and bmi2 in the monozygotic-twin subgroup only should be irrelevant, since any plausible starting values should lead the algorithm to converge upon the same final values, perhaps with some differences in computation time. (And my advice to convince yourself is: try it! Try several starting values and compare the parameter estimates of the converged models.)

Not the answer you're looking for? Browse other questions tagged correlation sem causality paired-data or ask your own question.