I was wondering if anyone knows of any really productive ways to graph/map/plot/visualize covariance matrix data. I am currently using levelplot() in R. It's very basic, and does the job, but we're looking for something better. We're also using R Shiny so that there is more interaction between the user and the data, but that also seems pretty basic. Please keep in mind my matrix is 2600x2600, so very large!

If you have any neat, creative ideas, or know of packages that I would be interested in.

Active Oldest Votes
6
$\begingroup$
Want to improve this post? Provide detailed answers to this question, including citations and an explanation of why your answer is correct. Answers without enough detail may be edited or deleted.

Look at the corrplot package for R. It has several options for visualizing correlation matrices.

I'm not sure about any R packages that do this, but my favourite approach (and I feel a much more informative approach) to visualization of covariance matrices are using correlation networks. Basically, I trim the covariance matrix using the Glasso algorithm (I'll explain why later), then use a force-directed algorithm to produce a network for the correlations. The size of the nodes are the variances. Ex: 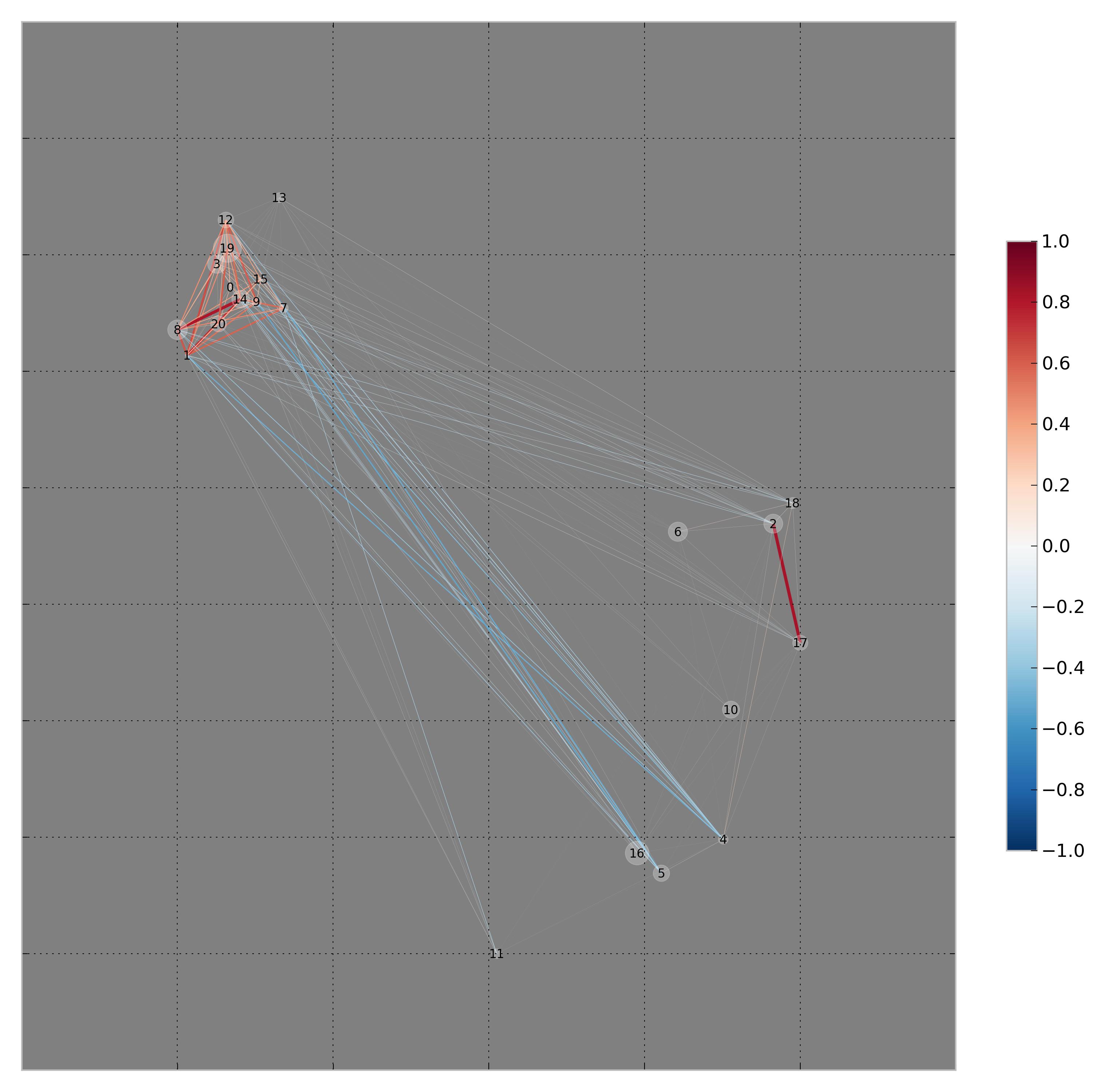 Remember, this is a network, so the axis mean nothing; it's all about neighbourhoods and distances. The red lines are high correlations, and the blue lines are negative correlations. We can spot clusters of variables, and second and third order correlations better than a matrix approach.

FYI, the above was generated using this Python script.

If you're using shiny and have the ability to make interactive tools, then just develop the covariance plot as a ggplot object so that you can add hover, dblclick, and brush tools for zooming and showing pop-up information.

Here's an intro to creating different correlation like plots in R with ggplot2: GGPlot2 CorrMatrix. And here's an intro to adding a pop-up with hover tools using ggplot objects in Shiny: Shiny Plot Hover Tool.

Alternatively, you may find the Plotly has some nice features for graphing the info you want, which also has easy-to-incorporate, interactive tools. For example: Plotly Heatmaps.

If you have questions on the ggplot method, feel free to message me. I've actually just recently developed a similar app with hover and zoom tools.

Not the answer you're looking for? Browse other questions tagged r self-study data-visualization covariance or ask your own question.

6
How to visualize/summarize a matrix with number of rows $\gg$ number of columns?
7
Visualize movie/actor relationships
13
Combining two covariance matrices
0
Mean of covariance matrices
8
Covariance between two random matrices
2
What interesting data manipulations can be done over 70x5 data points in a school context?