I am trying to perform a multiple regression in R. However, my dependent variable has the following plot: 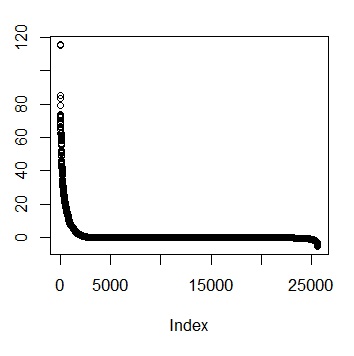 Here is a scatterplot matrix with all my variables (WAR is the dependent variable): 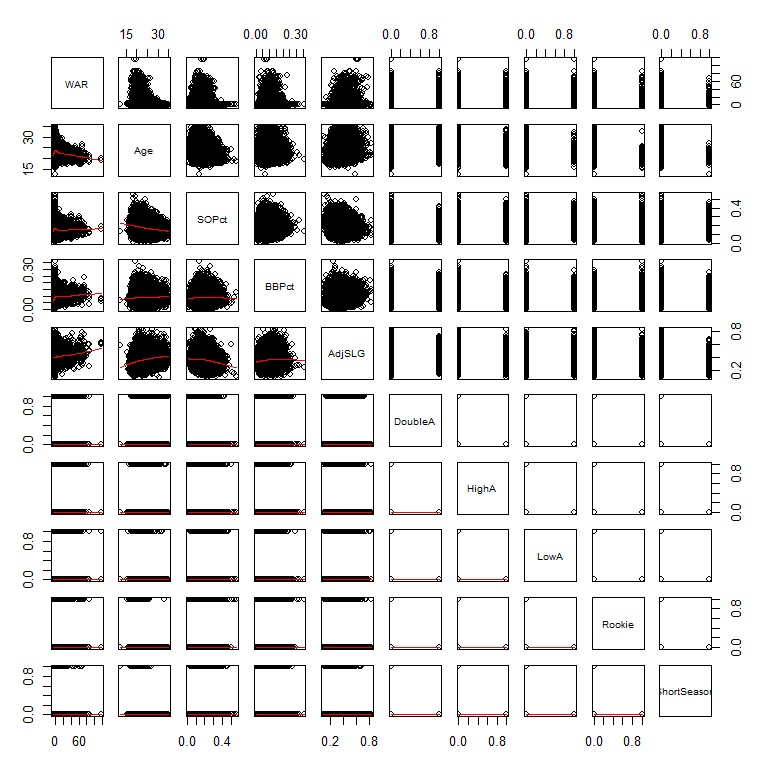 The diagnostic graphics from my regression look as follows: 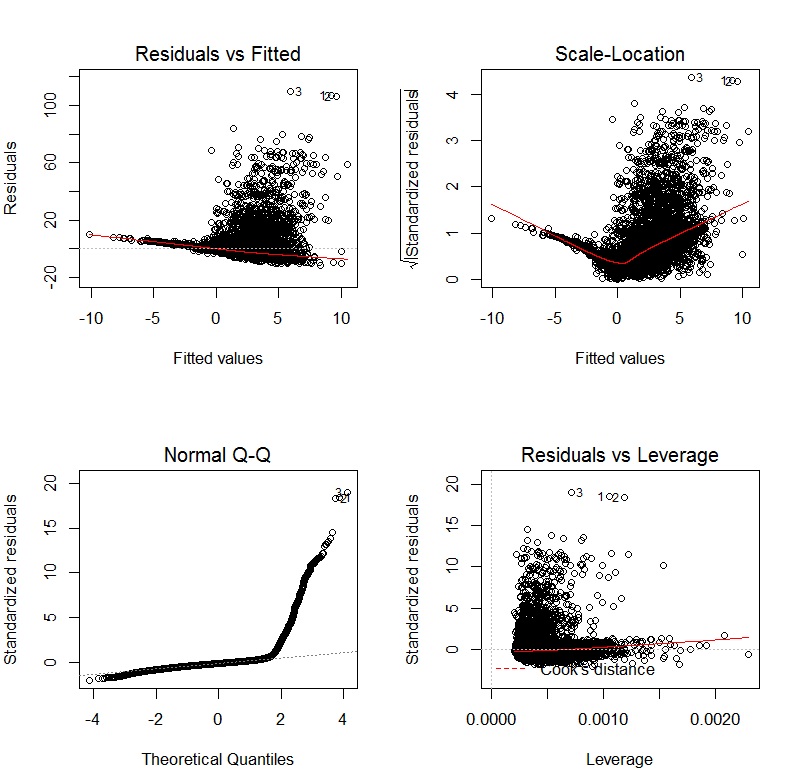 After transforming the dependent and independent variables using Yeo-Johnson transformations, the diagnostic plots look like this: 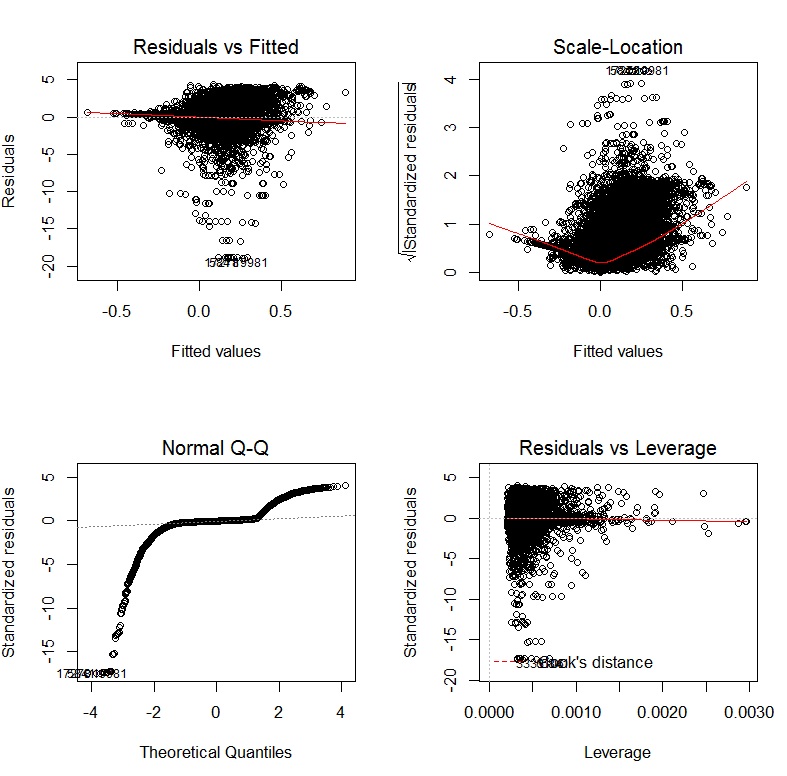 If I use a GLM with a log-link, the diagnostic graphics are: 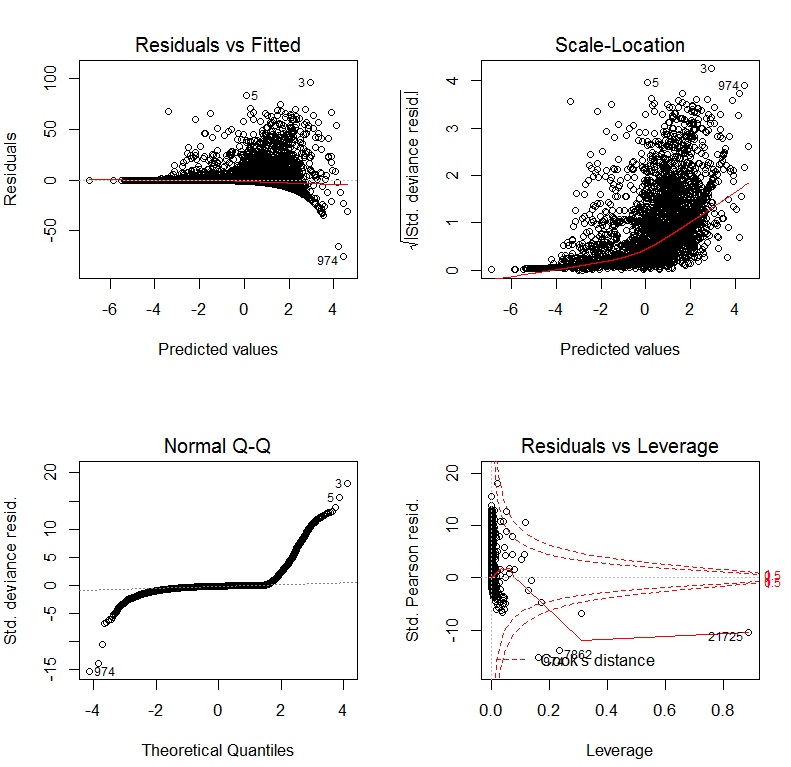 John Fox's book An R companion to applied regression is an excellent ressource on applied regression modelling with R. The package car which I use throughout in this answer is the accompanying package. The book also has as website with additional chapters.

Box-Cox transformations offer a possible way for choosing a transformation of the response. After fitting your regression model containing untransformed variables with the R function lm, you can use the function boxCox from the car package to estimate $\lambda$ (i.e. the power parameter) by maximum likelihood. Because your dependent variable isn't strictly positive, Box-Cox transformations will not work and you have to specify the option family="yjPower" to use the Yeo-Johnson transformations (see the original paper here and this related post): 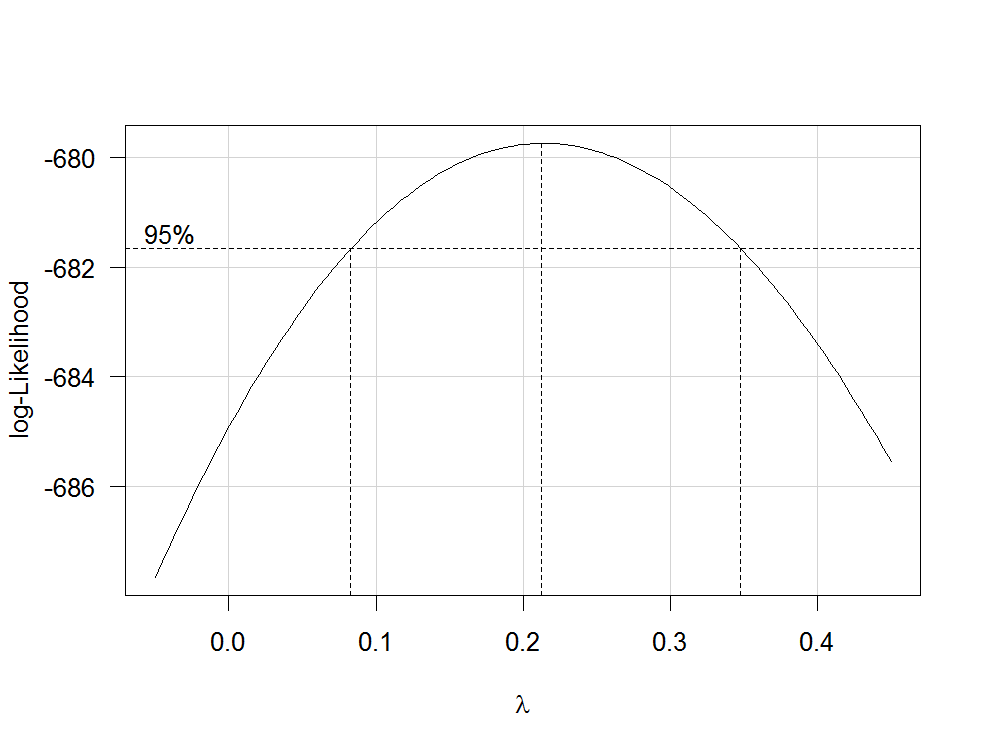 To transform your dependent variable now, use the function yjPower from the car package:

In the function, the lambda should be the rounded $\lambda$ you have found before using boxCox. Then fit the regression again with the transformed dependent variable.

Important: Rather than just log-transform the dependent variable, you should consider to fit a GLM with a log-link. Here are some references that provide further information: first, second, third. To do this in R, use glm:

Transformations of strictly positive predictors can be estimated by maximum likelihood after the transformation of the dependent variable. To do so, use the function boxTidwell from the car package (for the original paper see here). Use it like that: boxTidwell(y~x1+x2, other.x=~x3+x4). The important thing here is that option other.x indicates the terms of the regression that are not to be transformed. This would be all your categorical variables. The function produces an output of the following form:

In that case, the score test suggests that the variable income should be transformed. The maximum likelihood estimates of $\lambda$ for income is -0.348. This could be rounded to -0.5 which is analogous to the transformation $\text{income}_{new}=1/\sqrt{\text{income}_{old}}$.

Another very interesting post on the site about the transformation of the independent variables is this one.

While log-transformed dependent and/or independent variables can be interpreted relatively easy, the interpretation of other, more complicated transformations is less intuitive (for me at least). How would you, for example, interpret the regression coefficients after the dependent variables has been transformed by $1/\sqrt{y}$? There are quite a few posts on this site that deal exactly with that question: first, second, third, fourth. If you use the $\lambda$ from Box-Cox directly, without rounding (e.g. $\lambda$=-0.382), it is even more difficult to interpret the regression coefficients.

Have a look at this post from the site.

You should tell us more about the nature of your response (outcome, dependent) variable. From your first plot it is strongly positively skewed with many values near zero and some negative. From that it is possible, but not inevitable, that transformation would help you, but the most important question is whether transformation would make your data closer to a linear relationship.

Note that negative values for the response rule out straight logarithmic transformation, but not log(response + constant), and not a generalised linear model with logarithmic link.

There are many answers on this site discussing log(response + constant), which divides statistical people: some people dislike it as being ad hoc and difficult to work with, while others regard it as a legitimate device.

Alternatively, it may be that your model reflects some kind of mixed process, in which case a customised model reflecting the data generation process more closely would be a good idea.

The OP has a dependent variable WAR with values ranging roughly from about 100 to -2. To get over problems with taking logarithms of zero or negative values, OP proposes a fudge of zeros and negatives to 0.000001. Now on a logarithmic scale (base 10) those values range from about 2 (100 or so) through to -6 (0.000001). The minority of fudged points on a logarithmic scale are now a minority of massive outliers. Plot log_10(fudged WAR) against anything else to see this.

Not the answer you're looking for? Browse other questions tagged r regression multiple-regression data-transformation or ask your own question.