Given a 95% confidence level, how do I demonstrate 95% of the intervals actually contain the population mean?

Let me say first off that I'm consistently impressed with the quality of responses on this site. You folks have done a better job of explaining difficult concepts than most instructors or textbooks I've encountered.

Here's my set up.

A) I’ve generated a data set in Excel consisting of 20 samples with 64 observations each (i.e. n = 64) that represent prices.

C) Below is the best Excel formula I found that can generate something approaching a normal distribution. If anyone has any thoughts on this, let me know as I’m not wholly convinced as to how/why it works. I only know that RandBetween produces a uniform distribution so it’s useless for these purposes.

E) I chose \$12 as the standard deviation of population.

Here are my 20 confidence intervals. The ones with the asterisks fail to contain the population mean of \$62.50.

As you might have already guessed, here’s the issue: theoretically if 95% of these intervals contained the population mean, then only 1 interval out of 20 would have failed to include it. Instead there were 3. And this wasn’t an isolated incident. If I regenerate the prices repeatedly using F9, it only meets the 19 or greater threshold around 70% of the time with some iterations producing 20 out 20 intervals that contain the mean to as low as only 16 out of 20.

My question is why?

a) I boosted the number of samples to 100 and sample size to 1281 and got the same result so I don’t believe it’s an issue of sample size. 128,100 data points would seem to be sufficient.

b) I performed 10,000 iterations and recorded them using a macro and still got a “success rate” of about 70% same as before.

d) I’ve graphed the data in the form of a histogram to visually inspect it for normality and I’ve found no visual correlation between skewness, spikes, etc. and whether more or fewer intervals fail to contain the population mean. Also, I tried a Normal Quantile Plot Test for Normality that I found online on the 128.1k data point example and I did find a very slight amount of leptokurtosis for anyone who knows what to make of that.

Here are possible issues that may be impacting the result in ways I don’t understand.

a) The distribution is “truncated.” I found very little that was intelligible for a lay person like myself that explained how to calculate confidence intervals for this type of distribution, or even if this method is appropriate for truncated data. I couldn’t even find agreement on whether the truncation disqualifies it as normal in the strict sense.

b) Excel’s Norminv, Normdist, and Rand functions. Is Excel simply incapable of generating random normally distributed data with the level of accuracy needed to make this example work? Note that I also tried Excel’s data analysis->random number generation tool and got virtually identical results as the Excel formula I included above.

Any thoughts on what’s going on here would be greatly appreciated. If anyone can figure this out, it’s you guys.

It helps to distil your problem down to something simple and clear. When using Excel, this means:

To illustrate, let me share a spreadsheet I created long ago for exactly this purpose: to show, via simulation, how confidence intervals work. To start, here is the worksheet where the user sets parameter values and gives them meaningful names:

The simulation takes place in 100 columns of another worksheet. Here is a small piece of it; the remaining columns look similar.

How is it done? Let's look at the formulas: 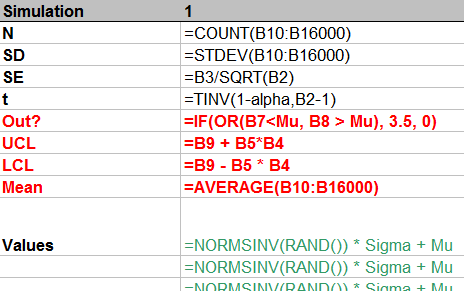 From top to bottom, the first few rows:

This stuff is of little interest, so it is shown in normal text. The interesting stuff is in red, but that should be self-explanatory from the formulas. (The strange formula for Out? will become apparent in the plot below.) The green values show how to generate normal variates with given mean Mu and standard deviation Sigma. This is done by inverting the cumulative distribution, as computed (for Normal distributions) by NORMSINV.

Finally, these 100 columns drive a graphic that shows all 100 confidence intervals relative to the specified mean Mu and also visually indicates (via the spikes at the bottom) which intervals fail to cover the mean. This is done with a little graphical trick: the value of Out? determines how high the spikes should be; a value of 3.5 extends them into the bottom of the plot, whereas a value of 0 keeps them outside the plot. (These values are plotted on an invisible left hand axis, not on the right hand axis.) 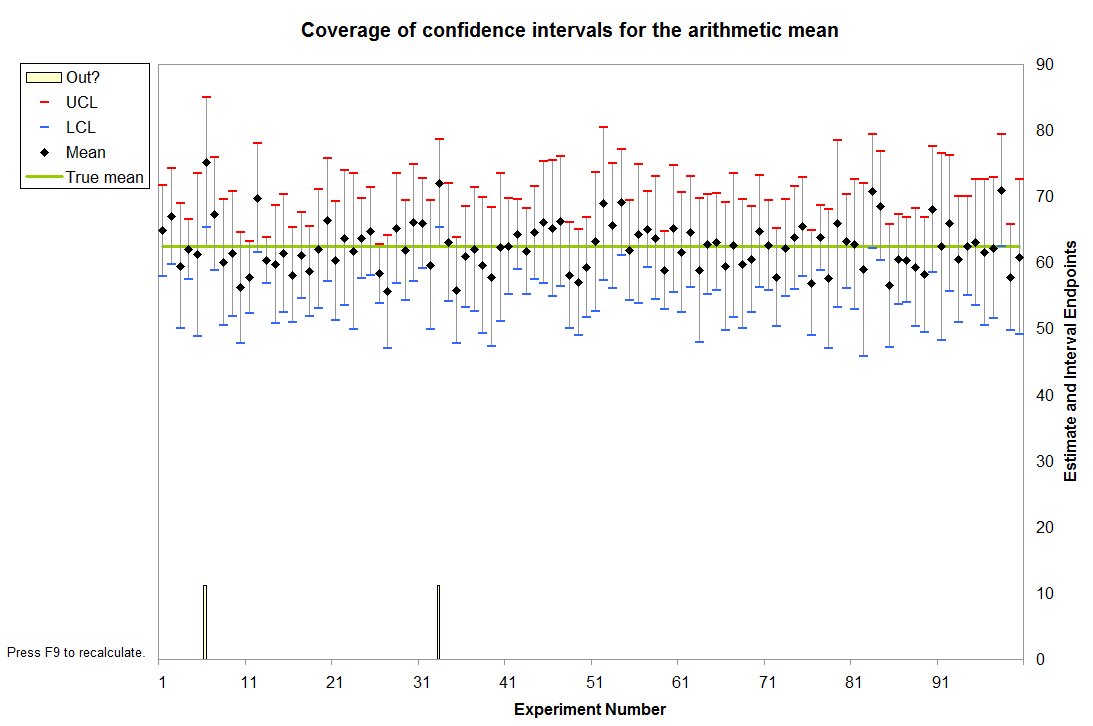 In this instance it is immediately apparent that two intervals failed to cover the mean. (The sixth and 33rd, it looks like.)

Because each interval has a $1-\alpha$ = $1-0.95$ = $5$% chance of not covering the mean in this example, the count of intervals out of $100$ follows a Binomial$(100, .05)$ distribution. This distribution gives relatively high probability to counts between $1$ (with $3.1$% chance of occurring) and $9$ (with $3.5$% chance of occurring); the chance that the count will be outside this range is only $3.4$%. By repeatedly pressing the "recalculation" key (F9 on Windows), you can monitor these counts. With a macro it's easy to accumulate these counts over many simulations, then draw a histogram and perhaps even conduct a Chi-square test to verify that they do indeed follow the expected Binomial distribution.

In any case, you have to simulate an infinite number of samples to get the result you want.

Or rely on probability theory.

The probably that the confidence interval covers the mean is 0.95. If you do $n$ CI's, the number that cover the true mean will follow a binomial distribution $(n,p)$, with $p=0.95$.

So nothing is certain.

Not the answer you're looking for? Browse other questions tagged normal-distribution confidence-interval binomial-distribution excel random-generation or ask your own question.

0
interpreting R plot of 100 t-confidence intervals on same graph.
7
How do I group a list of numeric values into ranges?
11
Use a trendline formula to get values for any given X with Excel
5
How to get the expected counts when computing a chi-squared test?
2
Overcoming Excel size limit to analyse a large network usage data