Some background on this question: I am working on a problem with very few instances (e.g. 10 positives and 10 negatives), and am afraid that my models may not generalize well/would overfit with so little data.

If you have only 20 patterns, it is very likely that you will experience over-fitting the model selection criterion, which is a much neglected pitfall in statistics and machine learning (shameless plug: see my paper on the topic). You may be better off choosing a relatively simple model and try not to optimise it very aggressively, or adopt a Bayesian approach and average over all model choices, weighted by their plausibility. IMHO optimisation is the root of all evil in statistics, so it is better not to optimise if you don't have to, and to optimise with caution whenever you do.

Choosing the number K folds by considering the learning curve

I would like to argue that choosing the appropriate number of $K$ folds depends a lot on the shape and position of the learning curve, mostly due to its impact on the bias. This argument, which extends to leave-one-out CV, is largely taken from the book "Elements of Statistical Learning" chapter 7.10, page 243.

To summarize, if the learning curve has a considerable slope at the given training set size, five- or tenfold cross-validation will overestimate the true prediction error. Whether this bias is a drawback in practice depends on the objective. On the other hand, leave-one-out cross-validation has low bias but can have high variance.

To understand this argument visually, consider the following toy example where we are fitting a degree 4 polynomial to a noisy sine curve: 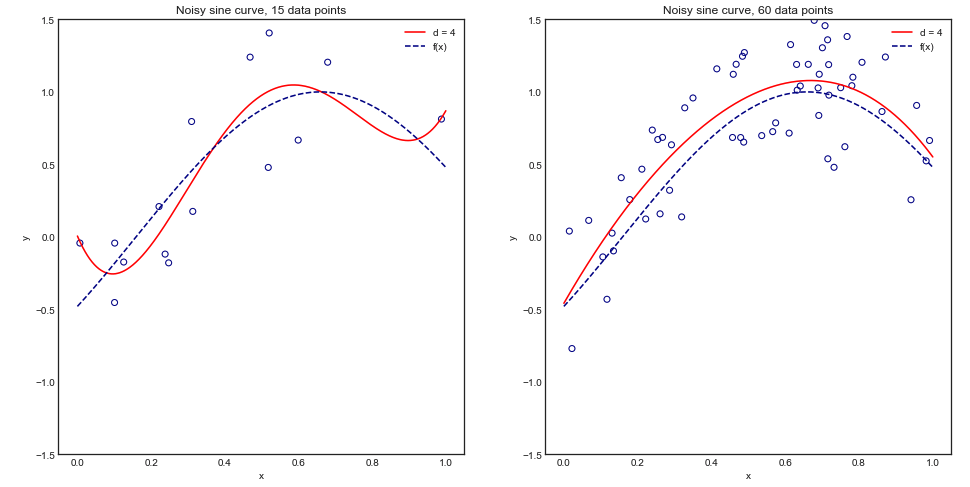 Intuitively and visually, we expect this model to fare poorly for small datasets due to overfitting. This behaviour is reflected in the learning curve where we plot $1 -$ Mean Square Error vs Training size together with $\pm$ 1 standard deviation. Note that I chose to plot 1 - MSE here to reproduce the illustration used in ESL page 243 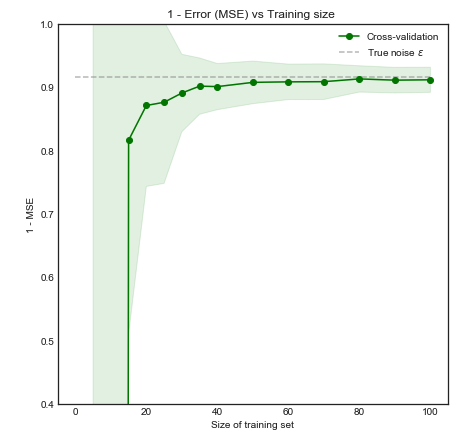 The performance of the model improves significantly as the training size increases to 50 observations. Increasing the number further to 200 for example brings only small benefits. Consider the following two cases: 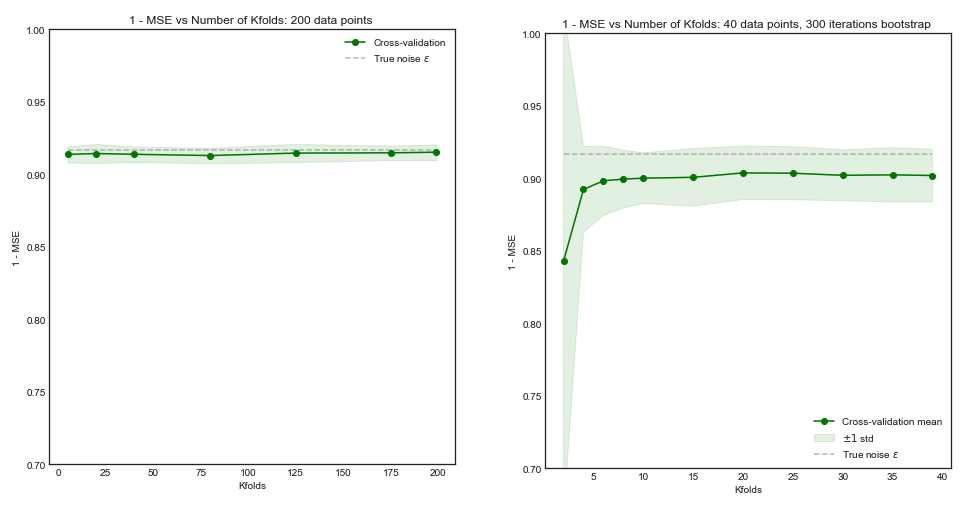 [Update] - Comments on the methodology

You can find the code for this simulation here. The approach was the following:

An alternative approach is to not resample a new data set at each iteration and instead reshuffle the same dataset each time. This seems to give similar results.