How can this be done?

(ii) More complex way: do least squares with box constraints on the slope; many optimizaton routines implement box constraints, e.g. nlminb (which comes with R) does.

Edit: actually (as mentioned in the example below), in vanilla R, nls can do box constraints; as shown in the example, that's really very easy to do.

I was going to show you how to use it with nlminb since that comes with R, but I realized that nls already uses the same routines (the PORT routines) to implement constrained least squares, so my example below does that case.

NB: in my example below, $a$ is the intercept and $b$ is the slope (the more common convention in stats). I realized after I put it in here that you started the other way around; I'm going to leave the example 'backward' relative to your question, though.

First, set up some data with the 'true' slope inside the range:

... but LS estimate is well outside it, just caused by random variation. So lets use the constrained regression in nls:

As you see, you get a slope right on the boundary. If you pass the fitted model to summary it will even produce standard errors and t-values but I am not sure how meaningful/interpretable these are.

So how does my suggestion (1) compare? (i.e. set the slope to the nearest bound and average the residuals $y-bx$ to estimate the intercept) 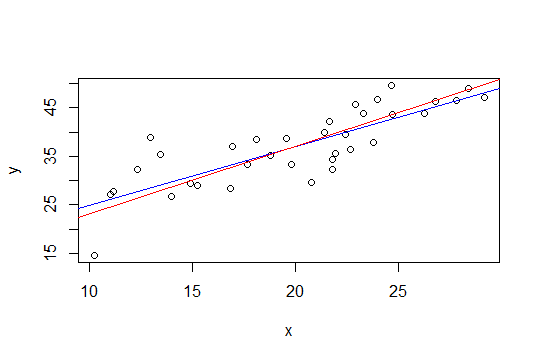 The benefit of this approach is that no fancy optimisation tools are required, just ridge regresson, which is already available in R (and many other packages).

However Glen_b's simple solution (i) seems sensible to me (+1)

Another approach would be to use Bayesian methods to fit the regression and choose a prior distribution on $a$ that only has support in the region you want, e.g. a uniform from 1.4 to 1.6, or a beta distribution shifted and scaled to that domain.

There are many examples on the web and in software of using Bayesian methods for regression, you can just follow one of those examples and change the prior on $a$.

This result will still give credible intervals of the parameters of interest (of course the meaningfulness of these intervals will be based on the reasonableness of your prior information about the slope).

Another approach might be to reformulate your regression as an optimization problem and use an optimizer. I'm not sure if it can be reformulated this way, but I thought of this question when I read this blog posting on R optimizers:

Not the answer you're looking for? Browse other questions tagged r regression constrained-regression or ask your own question.