How should I interpret the result of my OLS (involving H-statistic)?

Please consider the following excerpt from "Measuring and Explaining Competition in the Financial Sector" by Bikker and Spierdijk (2008):

"In many economic theories, competition is related to the (relative) size of a mark-up on the cost price as a component of the output price. However, data on the price-cost margin (PCM) are generally not available in the financial markets. Therefore, we have to measure competition indirectly. [...] This paper gives a survey of measures of competition of over 100 countries based on the Panzar-Rosse (P-R) model. [...] This approach measures how total interest revenues of banks in a country or market react to changes in input prices. A firm’s competitive behaviour in the market is reflected by the degree by which input price changes are passed through to output prices and to changes in output volume. The P-R model produces a certain H-statistic which under certain conditions reflects the degree of competition with H=1 pointing to perfect competition and H≤0 indicating monopoly or a perfect cartel. The range where H is 0 to 1 denotes monopolistic competition or oligopoly of some sort."

I have used this H-statistic in my (OLS) regression model where companies' social behavior is the dependent variable (on a scale from 0 to 100). There are about 2,500 companies from 30 countries in the dataset (each country having an H-statistic). My hypothesis was that competition has a curvelinear effect on social behavior:

To see whether this hypothesis is right, I first included the H-statistic in the OLS and second the (H-statistic)^2. I would have expected a positive coefficient in the first case, and a negative one in the latter. However:

My question is: how should I interpret this result? In other words: based on this outcome, how would you describe the relationship between competition in the banking industry and the social scores of those banks?

So you got a quadratic function of the form $\mathrm{social} = .150 H + .159 H^2 + \cdots$. We can than use the general properties of a quadratic function to derive at which value of $H$ the predicted social score is minimal, see e.g. http://en.wikipedia.org/wiki/Quadratic_function. In your case the mimimum happens at a H-statistic of $-\frac{.150}{2\times .159}=-.472$. Since the H-statistic ranges from 0 to a 1, the social score is always increasing as competitiveness increases. The increase is small at low levels of the H-statistic and the increase becomes stronger at higher values of the H-statistic, but looking at a graph shows that a linear fit will probably describe this relationship just as well. Your results at least also includes a constant, which will shift the curve up or down. Maybe you also included other variables, but these too will only shift the curve up or down and not change the shape (as long as you did not interact them with $H$). So with just the two numbers you gave us, we can already get a fair idea of what the shape looks like by plotting $y = .150 x + .159 x^2$: 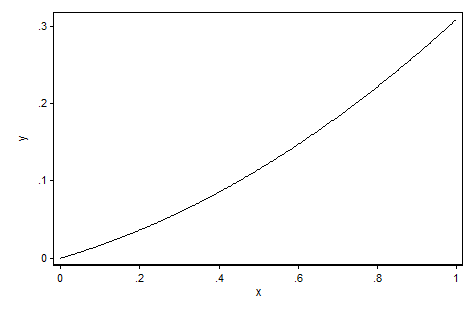 If you were to graph this yourself, you would obviously include the constant and fix other covariates at some meaningful value (e.g. the mean). However, for the purpose of answering this question, the graph above is sufficient.

Not the answer you're looking for? Browse other questions tagged regression interpretation least-squares or ask your own question.

2
Why do coefficients and significance levels change so much in my OLS? Do I need MIXED model instead?
5
What regression analysis should I perform on my data and why?
4
How to interpret glm and ols with offset
4
How to interpret the result of Friedman's test?
7
Sufficient Statistic for $\beta$ in OLS