I wonder what the difference between multivariate standard normal distribution and Gaussian copula is since when I look at the density function they seem the same to me.

Also what is the concept behind probability integral transformation in copula? I mean we know that a copula is a function with uniform variable. Why does it have to be uniform? Why not use the actual data like multivariate normal distribution and find the correlation matrix? (Normally we plot the two asset returns to consider their relationships but when it is copula, we plot the Us which are probabilities instead.)

Another question. I also doubt whether the correlation matrix from MVN could be non-parametric or semi-parametric like those of copula (for copula parameter can be kendall's tau, etc.)

I would be very thankful for your help since I'm new in this area. (but I have read a lot of papers and these are the only things that I don't understand)

One general rule about technical papers--especially those found on the Web--is that the reliability of any statistical or mathematical definition offered in them varies inversely with the number of unrelated non-statistical subjects mentioned in the paper's title. The page title in the first reference offered (in a comment to the question) is "From Finance to Cosmology: The Copula of Large-Scale Structure." With both "finance" and "cosmology" appearing prominently, we can be pretty sure that this is not a good source of information about copulas!

Let's instead turn to a standard and very accessible textbook, Roger Nelsen's An introduction to copulas (Second Edition, 2006), for the key definitions.

... every copula is a joint distribution function with margins that are uniform on [the closed unit interval $[0,1]]$.

For some insight into copulae, turn to the first theorem in the book, Sklar's Theorem:

Although Nelsen does not call it as such, he does define the Gaussian copula in an example:

[at p. 23, equation 2.3.6]. From the notation it is immediate that this $C$ indeed is the joint distribution for $(u,v)$ when $(\Phi^{-1}(u), \Phi^{-1}(v))$ is bivariate Normal. We may now turn around and construct a new bivariate distribution having any desired (continuous) marginal distributions $F$ and $G$ for which this $C$ is the copula, merely by replacing these occurrences of $\Phi$ by $F$ and $G$: take this particular $C$ in the characterization of copulas above. 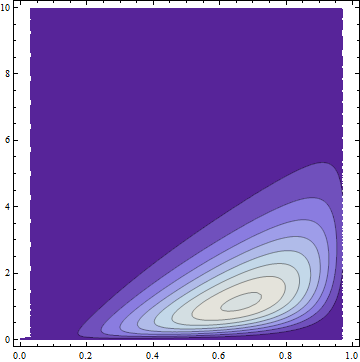 The lack of symmetry makes it obviously non-normal (and without normal margins), but it nevertheless has a Gaussian copula by construction. FWIW it has a formula and it's ugly, also obviously not bivariate Normal:

Not the answer you're looking for? Browse other questions tagged normal-distribution copula or ask your own question.

3
What is the advantage of modelling dependency using Copulas?
1
Nelsen's book on copulas and the Gaussian copula