After doing an ACF of the second difference of my data with R, I saw a spike from the lag one point that crosses the horizontal dashed line. This led me to suggest a nonseasonal MA(1) component. I then saw a lag from the 12th point that lies right on the horizontal dashed line. Can this mean there is a seasonal MA(1) component with period 12? And if so, can monthly seasonally adjusted data still exhibit seasonality?

Second point. You ought to be careful when using the acf() function in R at the identification stage of ARIMA analysis! The reason being is that the horizontal blue dashed-line that you are referring to is not based on Bartlett's approximations - unless you specify the argument ci.type="ma".

To see this in action, consider the following ACF and PACF generated using acf() and pacf() in R. 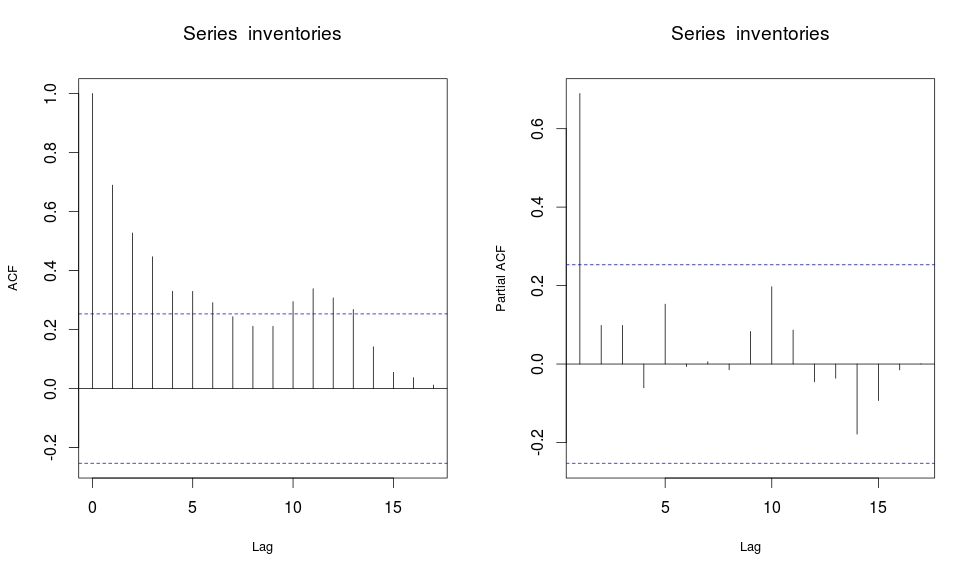 The data is not of importance, but in case you're wondering, it is quarterly change in business inventories (a better description can be found at end of this answer).

From the ACF, it seems to be the case that the autocorrelation coefficients at lags 1-6 and at lags 10-13 are statistically significant. From the PACF, there appears to be one significant spike at the first lag. This reading is only partially true, however. It is correct that there is a single spike in the PACF at the first lag, but the ACF reading is erroneous and here's why.

The ACF and PACF shown below is for the exact same data except this time I have plotted a solid red line based on Bartlett's approximations to the ACF. The solid red line on the PACF is the same as before since there is nothing wrong with it. 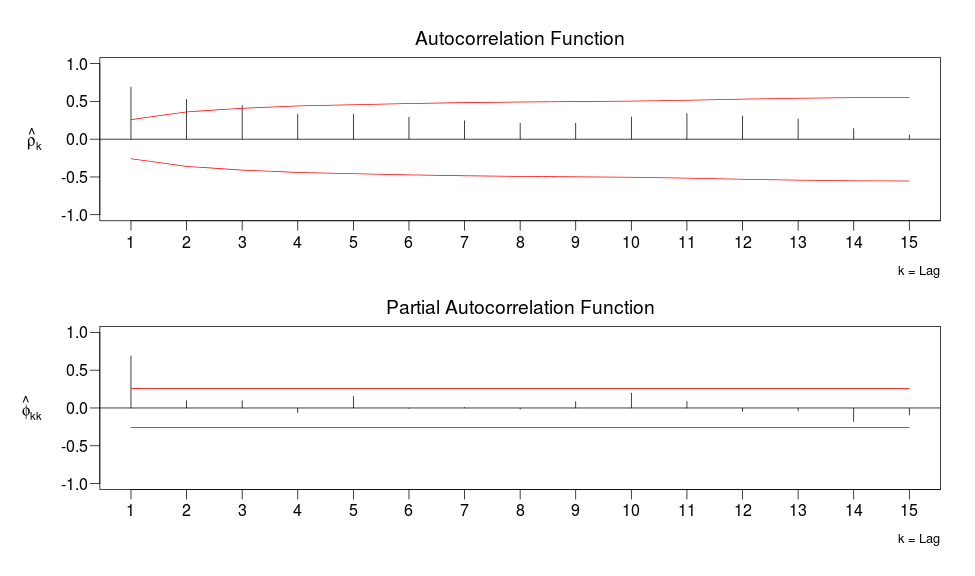 We get a far clearer reading this time by using Bartlett's standard errors. The ACF decays to statistical insignificance rather quickly. Only the first three autocorrelations are significantly different from zero at about the 5% level. That is, only the first three spikes extend beyond the solid red line (not 1-6 and 10-13!). Coupled with the fact that there is only one significant spike in the PACF at lag 1, we can tentatively identify an AR(1) model for this data.

This is just one example and I could supply others (perhaps more illustrative ones), but if you continue to use acf() (without specifying ci.type="ma") at the identification stage of ARIMA analysis, expect to draw inappropriate conclusions from the ACF when identifying tentative models.

My concluding suggestion would be to replace the horizontal blue dashed-line on your ACF with one like the solid red-line that I've plotted in the ACF above. You can do this by specifying the argument ci.type="ma". If you have trouble doing that, let me know or post your data and I'll do it for you. Also, I doubt the autocorrelation at lag 12 of your data is statistically significant; as a general rule, the red solid line widens as lag length increases and it also lies beyond the blue dashed line.

Note: the default usage of acf() is actually fine at the diagnostic checking stage!

Bartlett, M.S. (1946) On the theoretical specification and sampling properties of autocorrelated time series. Supplement to the Journal of the Royal Statistical Society 8 27-41.

Quarterly change in business inventories as appears in a case study of Pankratz (1983). The original series can be found in Business Conditions Digest, November 1979, p.97. The data is also available at http://robjhyndman.com/tsdldata/books/pankratz.dat and the case study itself can be downloaded from the Wiley Online Library.

10
How do I incorporate an innovative outlier at observation 48 in my ARIMA model?
1
Still seeing seasonal pattern in ACF plot after multiple differencing

2
How to check if a series has been seasonally adjusted correctly?
1
A smoothed series still exibits strong seasonality
1
Time series analysis (ACF, PACF)
3
Choosing the right ARIMA model when data are already seasonally adjusted
0
Seasonally Adjusted Year-Over-Year Analysis
1
Unable to remove seasonal flucatuations from NDVI data
1
I want to know whether the data I have is showing seasonality or not