Visualizing the intersections of many sets

Is there a visualization model that is good for showing the intersection overlap of many sets?

I am thinking something like Venn diagrams but that somehow might lend itself better to a larger number of sets such as 10 or more. Wikipedia does show some higher set Venn diagrams but even the 4 set diagrams are a lot to take in.

My guess as to the final result of the data would be that many of the sets won't overlap so it is possible that Venn diagrams would be fine -- but I would like to find a computer tool that will be able to generate that. Its looks to me like Google charts doesn't allow that many sets.

When you have a large number of sets, I would try something that is more linear and shows the links directly (like a network graph). Flare and Protovis both have utilities to handle these visualizations. 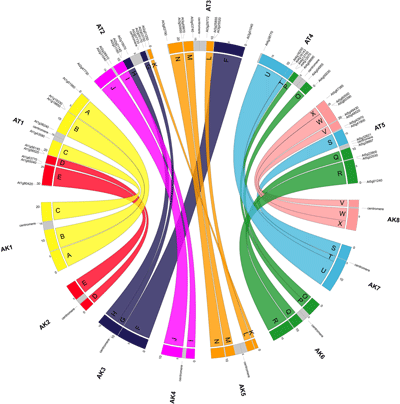 This won't compete with @Shane's answer because circular displays are really well suited for displaying complex relationships with high-dimensional datasets.

For Venn diagrams, I've been using the venneuler R package. It has a simple yet intuitive interface and produce nifty diagrams with transparency, compared to the basic venn() function described in the Journal of Statistical Software. It does not handle more than 3 categories, though. Another project is eVenn and it deals with $K=4$ sets.

More recently, I came across a new package that deal with higher-order relation sets, and probably allow to reproduce some of the Venn diagrams shown on Wikipedia or on this webpage, What is a Venn Diagram?, but it is also limited to $K=4$ sets. It is called VennDiagram, but see the reference paper: VennDiagram: a package for the generation of highly-customizable Venn and Euler diagrams in R (Chen and Boutros, BMC Bioinformatics 2011, 12:35).

Venn diagrams have their limitations, though. In this respect, I like the approach taken by Robert Kosara in Sightings: A Vennerable Challenge, or with Parallel Sets (but see also this discussion on Andrew Gelman weblog).

We developed a matrix-based approach for set intersections called UpSet, you can check it out at http://vcg.github.io/upset/. Here is an example: 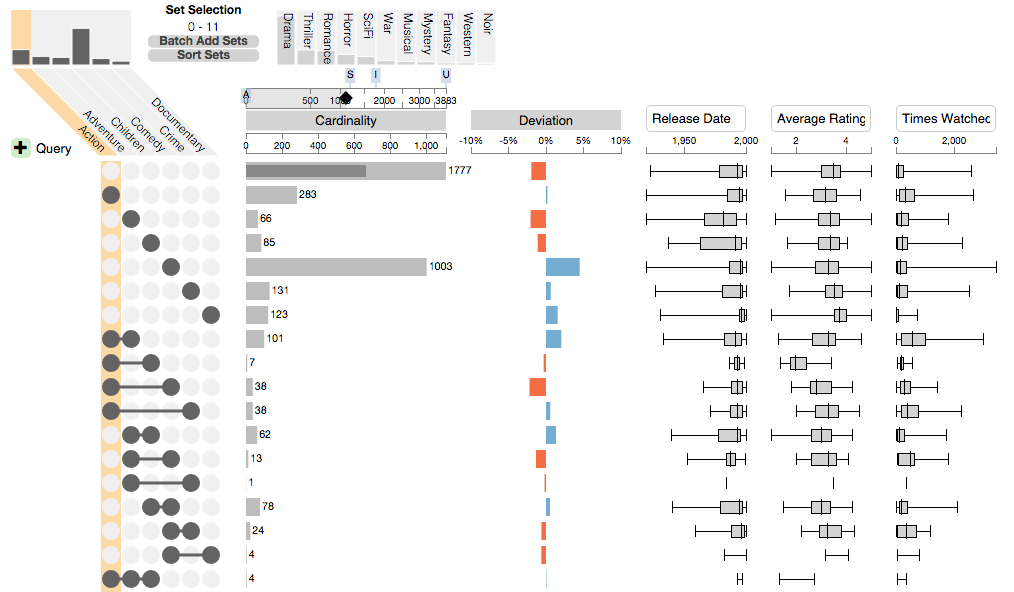 You can also plot attributes of the intersections or other selections, etc. Check out the website for details.

There is now also a static version for R which you can find on the website mentioned above, or by going here: https://github.com/hms-dbmi/UpSetR/

A state of the art report on set visualization is accessible at http://www.cvast.tuwien.ac.at/SetViz - most of these are academic though and don't come with readily available code.

Not the answer you're looking for? Browse other questions tagged data-visualization dataset or ask your own question.

20
What is this type of circular-link visualization called?
18
How to visualize 3D contingency matrix?

0
Any suggestions for storing diverse data sets for on-line visualization?
4
What type of graphs can be used to show overlap between many sets?
0
Is there any software to draw area-proportional Venn diagrams when a∩b∩c= 0?
0
What's the best (Google chart) visualisation for displaying sparse timeline data across thousands of "columns"
1
What would be a clear way of showing both the homicide count and rate in one single visualization?
1
Data visualization for segments in a grid?
3
Right data visualization for employee progression data: Sankey, mosaic or parallel sets?
23
Are heat maps "one of the least effective types of data visualization"?
1
Grouping and visualizing values from data set with multiple variables