This question deals with an example of image reconstruction related to this other question on signal reconstruction. I have different issues in both examples but there could be an underlying factor.

I tried to reconstruct an image using compressed sensing just as in Coursera's course "Computational Methods for Data Analysis" and described in some detail in this pdf (page 414.) By the way, this is the low resolution image: 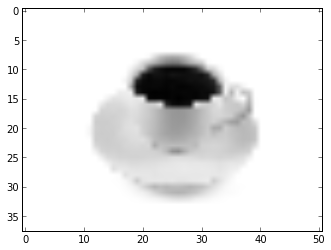 However, I have a question regarding the reconstruction of the image using $f \approx \Psi x$ where $f$ is the original image, $\Psi$ is a basis (in this case, a discrete cosine transform) to express the image and $x$ its coefficients. This is what I have done, but I'm not entirely sure it's correct.

It worked reasonably well, but notice that the first image (in which IDCT was used) performed better. I would have assumed that, if something, DCT was more appropriate choice since at least we used the result of a DCT in the construction of Adelta. What is the correct procedure here?

This article helped me to understand this problem by using the Kronecker product. Here is an excerpt of the article:

Creating the $A$ matrix for 2D image data takes a little more ingenuity than it did in the 1D case. In the derivation that follows, we’ll use the Kronecker product $\otimes$ and the fact that the 2D discrete cosine transform is separable to produce our operator $A$.

If $\textit{vec}(X)$ is the vector operator that stacks columns of $X$ on top of each other, then:

In the article the library CVXPY is used, but I solved it with the LASSO regularizer:

Now you can apply the LASSO regression

I know that this is an old question but I am answering it in case googles this topic and would like to know the answer.

The problem is the compression matrix and the basis you are doing the sparse reconstruction in are coherent since they are both constructed from the DCT matrix. Do the sparse reconstruction in the DCT basis since the image will sparse/compressible in that basis. For the compression matrix, you need to choose something that will not correlate with the DCT matrix. Noiselets, Random Gaussian will work well. You might try JL-Lemma type matrices as well though I never found them to be very reliable.

Not the answer you're looking for? Browse other questions tagged python signal-processing image-processing computer-vision or ask your own question.

3
Using PCA for detecting similar regions in an image
4
How to calculate the signal-to-noise ratio (SNR) in an image?
3
Compressed Sensing: Missing Fourier Coefficients?
5
How is PCA used for 3D face reconstruction from 2D image?
1
Non overlapping Clustering/ Segmentation of image points
1
How does smoothing an image gives it a different scale?
0
Image classification using Semantic Segmented Images