How do I interpret the figure output from package dlnm in R?

I am performing distributed non-linear lag models in R.

I got the figure result of dlnm as shown in the vignette (pdf) on page 13: 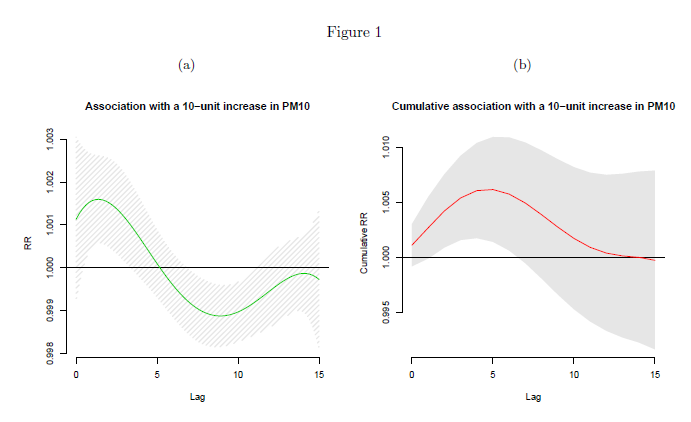 The X-axis is lag, which I can understand. However, I cannot understand what the label for the Y-axis means. For the figure on page 13, the Y-axis is called "RR" (relative risk) which is positive; however, I got a negative RR when I input my data. My $X$ is temperature, my $Y$ is pollutant concentration. Can I still use the model?

Could anybody explain it to me a little bit?

The R code that I am using is: 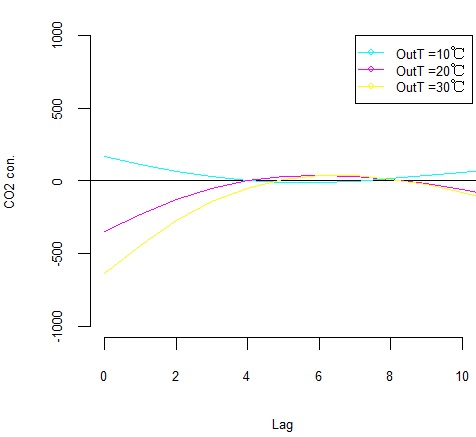 Since RR cannot be negative, could there be a way for me to transfer my x(Temperature) and y (Pollutant con.) to make it fitting the requirement of the model?

Thanks for all your help!!

Interpretation of the graph in your case

Can I still use the model?

Yeah, you can still use such a model.

Let's summarize what you do:

The plot that you have provided is interpreted as follows: The x-axis is the lag.

I think a contour plot would be easier to interpret. Try the following code:

First, a little something about distributed lag models. They have the form:

$$ Y_{i}=\alpha + \sum_{l=0}^{K}\beta_{j}x_{t-l} + \text{other predictors} +\epsilon_{i} $$ where $K$ is the maximum lag and $x$ is a predictor. This is just fitted using a multiple linear regression. So the coefficient $\beta_{1}$ would estimate the effect of $x_{t-1}$ of the day before on $Y_{t}$. In essence, multiple lags of the predictors are included in the model simultaneously. This obviously has the problem that the lagged predictors are highly correlated (autocorrelation).

A more advanced method are polynomial distributed lag models. It has the same basic formula as above, but the impulse-response function is forced to lie on a polynomial of degree $q$ (link to a paper for Stata):

Where $f_{j}(i)$ is a polynomial of degree $j$ in the lag length $i$. A good introduction to the dlnm package and polynomial distributed lag models can be found here.

These models are often used in studies about air-pollution and health because air-pollution has lagged effects on health outcomes.

Let's look at this graph from the vignette of the dlnm package (page 13): 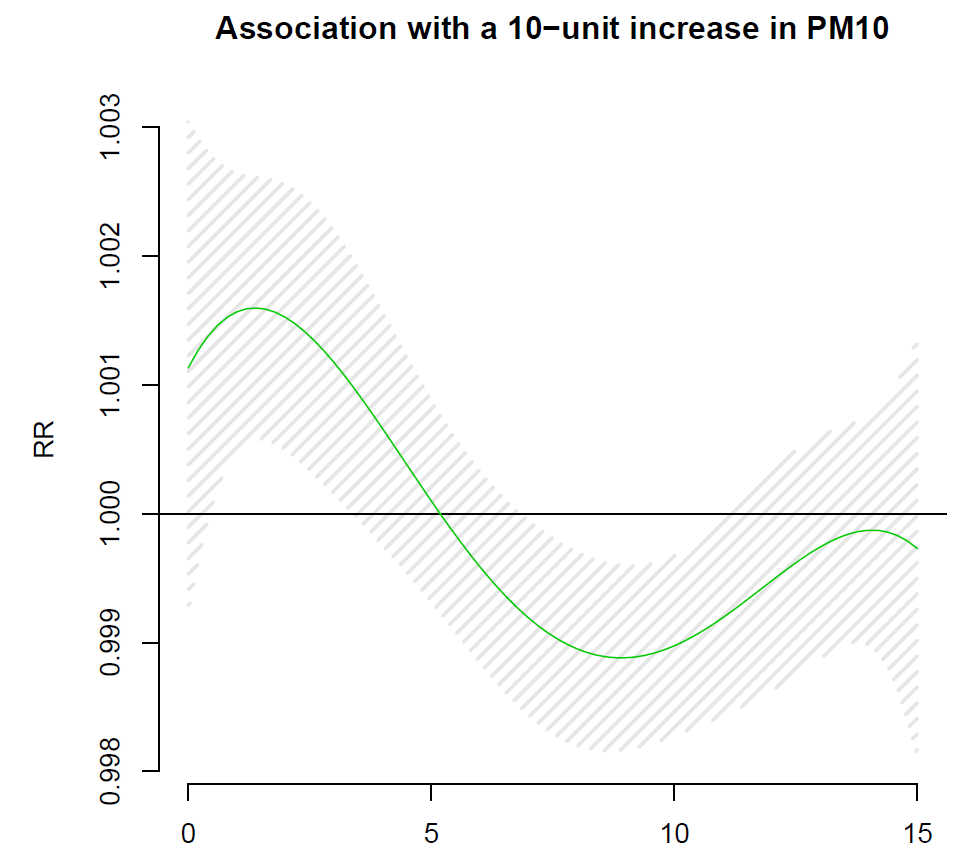 The degree of the polynomials was $q=4$ in this case so the green line is a polynomial of 4th degree. The y-axis is the relative risk (RR) estimated via Poisson regression and the x-axis the considered lag. The relative risk has the following interpretation: Persons who were exposed have a $(RR-1)\cdot100\%$ higher/lower chance of getting the outcome (e.g. death, lung cancer, etc.) compared to people who were not exposed. If $RR>1$ this means a positive association and if $RR<1$ means a protective association. A $RR=1$ means no association. We see that for every increase of $\textrm{PM}_{10}$ by 10 units ($\mu \mathrm{g}/m^{3}$), there is a $(1.001-1)\cdot100\%=0.1\%$ increase in the risk to die at lag 0 (i.e. on the same day as the exposure). Strangely, the exposure from about 9 days ago is protective: an increase of 10$~\mu \mathrm{g}/m^{3}$ is associated with a decreased risk to die compared to people with 10 units less exposure. We can also see that the exposure from 15 days before doesn't play a role (i.e. $RR\approx1$). 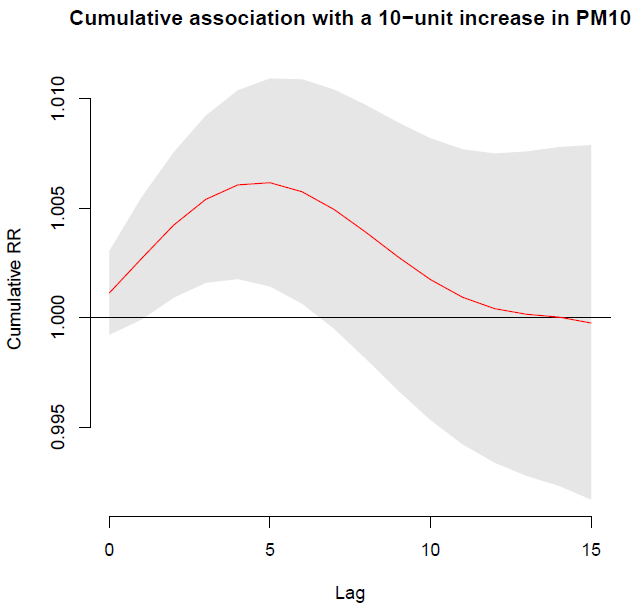 This is the same as before but the effects are cumulated over time (i.e. summing all contributions from the lags up to the maximum lag). The red line starts at the same point as the green line in the first graphic (i.e. $\approx1.001$). We can see that people who have been exposed for five days have an increased cumulative risk of about $(1.005-1)\cdot100\%=0.5\%$ to die compared to non-exposed people. Because the green line goes below the relative risk of $1$ after a lag of about 5 days, the cumulative association after 15 days is nearly $1$. This means that the protective effects of $\textrm{PM}_{10}$ from lag 5 on have compensated the harmful effects from earlier lags. Whether that is scientifically reasonable is another quesiton.

Not the answer you're looking for? Browse other questions tagged r time-series nonlinear-regression relative-risk or ask your own question.