Recall and precision in classification

I read some definitions of recall and precision, though it is every time in the context of information retrieval. I was wondering if someone could explain this a bit more in a classification context and maybe illustrate some examples. Say for example I have a binary classifier which gives me a precision of 60% and a recall of 95%, is this a good classifier ?

Maybe to help my goal a bit more, what is the best classifier according to you ? (dataset is imbalanced. Majority class has twice the amount of examples of the minority class)

I'd personally say 5 because of the area under the receiver operator curve.

(as you can see here model 8 has a low precision, very high recall, but one of the lowest AUC_ROC, does that make it a good model ? or a bad one ?) 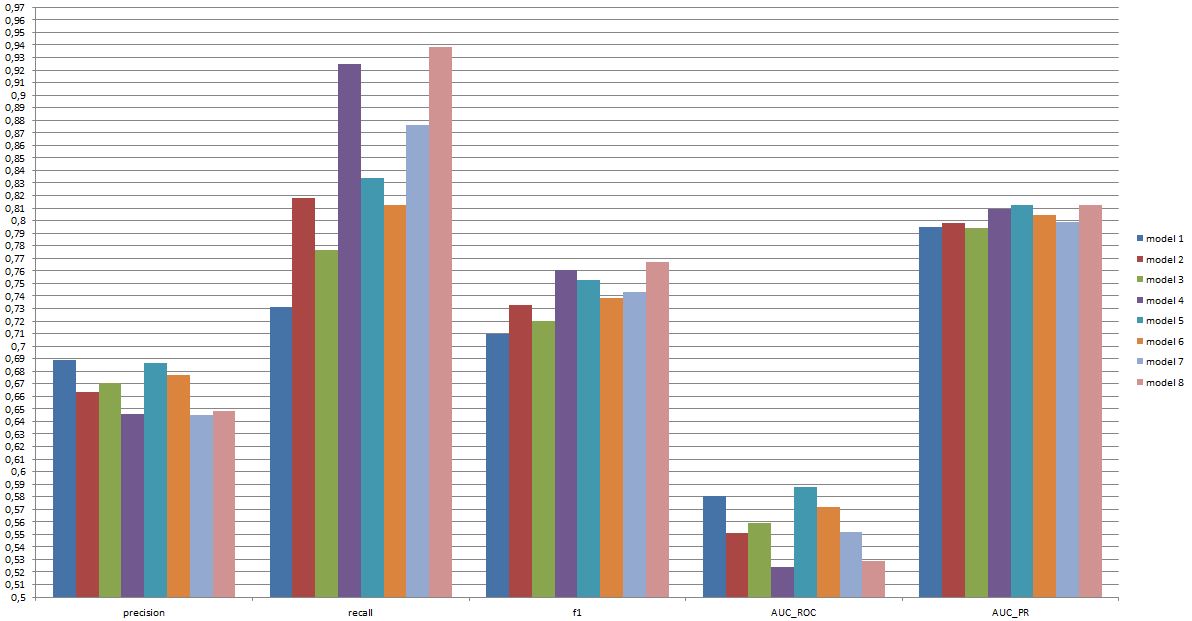 I have an excel file with more information: https://www.dropbox.com/s/6hq7ew5qpztwbo8/comparissoninbalance.xlsx

Whether a classifier is “good” really depends on

To understand the link between recall/precision on the one hand and sensitivity/specificity on the other hand, it's useful to come back to a confusion matrix:

Recall is TP/(TP + FN) whereas precision is TP/(TP+FP). This reflects the nature of the problem: In information retrieval, you want to identify as many relevant documents as you can (that's recall) and avoid having to sort through junk (that's precision).

Using the same table, traditional classification metrics are (1) sensitivity defined as TP/(TP + FN) and (2) specificity defined as TN/(FP + TN). So recall and sensitivity are simply synonymous but precision and specificity are defined differently (like recall and sensitivity, specificity is defined with respect to the column total whereas precision refers to the row total). Precision is also sometimes called the “positive predictive value” or, rarely, the “false positive rate” (but see my answer to Relation between true positive, false positive, false negative and true negative regarding the confusion surrounding this definition of the false positive rate).

Because of this difference, it's not possible to go from specificity to precision or the other way around without additional information, namely the number of true negatives or, alternatively, the overall proportion of positive and negative cases. However, for the same corpus/test set, higher specificity always means better precision so they are closely related.

In an information retrieval context, the goal is typically to identify a small number of matches from a large number of documents. Because of this asymmetry, it is in fact much more difficult to get a good precision than a good specificity while keeping the sensitivity/recall constant. Since most documents are irrelevant, you have many more occasions for false alarms than true positives and these false alarms can swamp the correct results even if the classifier has impressive accuracy on a balanced test set (this is in fact what's going on in the scenarios I mentioned in my point 2 above). Consequently, you really need to optimize precision and not merely to ensure decent specificity because even impressive-looking rates like 99% or more are sometimes not enough to avoid numerous false alarms.

There is usually a trade-off between sensitivity and specificity (or recall and precision). Intuitively, if you cast a wider net, you will detect more relevant documents/positive cases (higher sensitivity/recall) but you will also get more false alarms (lower specificity and lower precision). If you classify everything in the positive category, you have 100% recall/sensitivity, a bad precision and a mostly useless classifier (“mostly” because if you don't have any other information, it is perfectly reasonable to assume it's not going to rain in a desert and to act accordingly so maybe the output is not useless after all; of course, you don't need a sophisticated model for that).

Considering all this, 60% precision and 95% recall does not sound too bad but, again, this really depends on the domain and what you intend to do with this classifier.

Some additional information regarding the latest comments/edits:

Again, the performance you can expect depends on the specifics (in this context this would be things like the exact set of emotions present in the training set, quality of the picture/video, luminosity, occlusion, head movements, acted or spontaneous videos, person-dependent or person-independent model, etc.) but F1 over .7 sounds good for this type of applications even if the very best models can do better on some data sets [see Valstar, M.F., Mehu, M., Jiang, B., Pantic, M., & Scherer, K. (2012). Meta-analysis of the first facial expression recognition challenge. IEEE Transactions on Systems, Man, and Cybernetics, Part B: Cybernetics, 42 (4), 966-979.]

Whether such a model is useful in practice is a completely different question and obviously depends on the application. Note that facial “expression” is itself a complex topic and going from a typical training set (posed expressions) to any real-life situation is not easy. This is rather off-topic on this forum but it will have serious consequences for any practical application you might contemplate.

Finally, head-to-head comparison between models is yet another question. My take on the numbers you presented is that there isn't any dramatic difference between the models (if you refer to the paper I cited above, the range of F1 scores for well-known models in this area is much broader). In practice, technical aspects (simplicity/availability of standard libraries, speed of the different techniques, etc.) would likely decide which model is implemented, except perhaps if the cost/benefits and overall rate make you strongly favor either precision or recall.

In the context of binary classification, examples are either positive or negative.

One could say "at a recall at least 90%, the classifier with the highest precision is 4." But if what matters is the quality of the predictions, among the classifiers with a precision of at least 70%, the one that achieves highest recall is 6.

Moving from continuous predictions, as used in computing ROC area (concordance probability; c-index) to a discontinuous improper scoring rule (forced-choice classification accuracy) results in all kinds of anomalies and will mislead the analyst to choose the wrong predictors and/or the wrong model. It is much better to make decisions on the basis of proper scoring rules (e.g., log-likelihood/deviance/logarithmic probability scoring rule; Brier score (quadratic probability accuracy score)). Among the many advantages of such an approach is the identification of observations for which classification is hazardous to your health due to uncertainty caused by mid-range probabilities.

An interesting way to get a single number (proficiency, aka uncertainty coefficient) describing the classifier performance is to use information theory:

i.e., it tells you what fraction of the information present in the actual data was recovered by the classifier. It is 0 if either precision or recall is 0 and it is 100% if (and only if) both precision and recall are 100%. In that it is similar to F1 score, but proficiency has a clear information-theoretical meaning while F1 is just a harmonic average of two numbers with a meaning.

You can find paper, presentation and code (Python) to compute the Proficiency metric here: https://github.com/Magnetic/proficiency-metric

25
Given true positive, false negative rates, can you calculate false positive, true negative?
11
Why doesn't recall take into account true negatives?
1
reconstruct a 2X2 confusion matrix (TP, TN, FP, FN) from Sensitivity and Specificity
0
How to evaluate "performance" of my model?
0
Confidence intervals for precision and recall of a small sample
0
How to interpret precision and recall for multiclass prediction?