What is the sum of squared t variates?

Let $t_i$ be drawn i.i.d from a Student t distribution with $n$ degrees of freedom, for moderately sized $n$ (say less than 100). Define $$T = \sum_{1\le i \le k} t_i^2$$ Is $T$ distributed nearly as a chi-square with $k$ degrees of freedom? Is there something like the Central Limit Theorem for the sum of squared random variables?

The article by P.C.B. Phillips shows that my first guess about "[confluent] hypergeometric functions involved" was indeed true. It means that the solution will be not trivial, and the brute-force is complicated, but necessary condition to answer your question. So since $n$ is fixed and you sum up t-distributions, we can't say for sure what the final result will be. Unless someone has a good skill playing with products of confluent hypergeometric functions.

Intuitively, for small degrees of freedom Student's $t$ is heavy tailed. Squaring it emphasizes that heaviness. The sums therefore will be more skewed--usually much more skewed--than sums of squared normals (the $\chi^2$ distribution). Calculations and simulations bear this out. 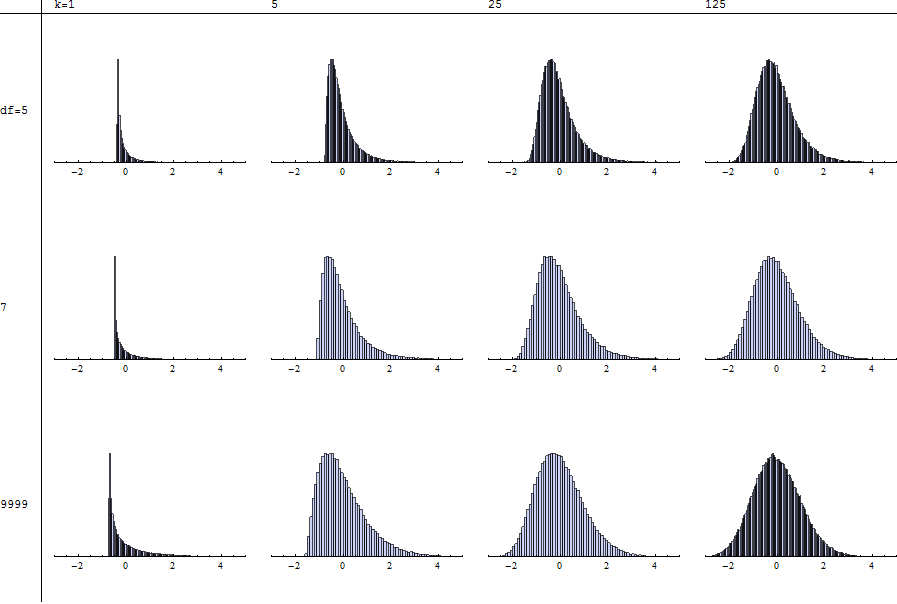 Each histogram depicts an independent simulation of 100,000 trials with the specified degrees of freedom ($n$) and summands ($k$), standardized as described by @mpiktas. The value of $n=9999$ on the bottom row approximates the $\chi^2$ case. Thus you can compare $T$ to $\chi^2$ by scanning down each column.

Note that standardization is not possible for $n \lt 5$ because the appropriate moments do not even exist. The lack of stability of shape (as you scan from left to right across any row or from top to bottom down any column) is even more marked for $n \le 4$.

Which Student t variables, when squared, have finite variance? When $X$ is any random variable, by one standard definition the variance of its square $Y=X^2$ is

Its integral diverges when the exponent exceeds $-1$ and otherwise converges; that is,

The standardized version of $T$ converges to a standard Normal distribution if and only if $\nu \gt 4.$

I'll answer second question. The central limit theorem is for any iid sequence, squared or not squared. So in your case if $k$ is sufficiently large we have

Not the answer you're looking for? Browse other questions tagged chi-squared central-limit-theorem t-distribution or ask your own question.