Analysis of variance (ANOVA) is a collection of statistical models used to analyze the differences between group means and their associated procedures (such as "variation" among and between groups). In ANOVA setting, the observed variance in a particular variable is partitioned into components attributable to different sources of variation.

In one way or two way ANOVA, (which are the types of ANOVA I have seen), the input variable $X$ is categorical, whose value represents the group of the sample.

in The Elements of Statistical Learning: Data Mining, Inference, and Prediction. by Trevor Hastie, Robert Tibshirani, and Jerome Friedman, ANOVA seems to be a way of modeling $E(Y|X)$ as sum of functions of various number of components of $X$. It doesn't relate to variance or partition of variance into some form. $X$ is not necessarily categorical either and may be continuous valued. Or am I missing something? Thanks! 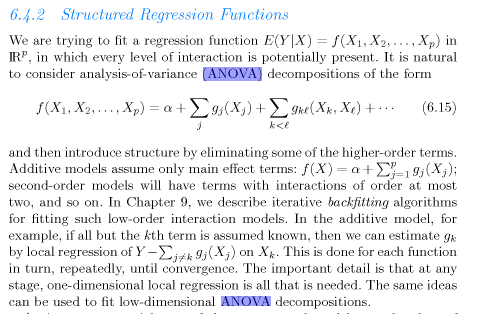 One-way and two-way ANOVA are just two simple versions, but I doubt two experts on the topic would agree exactly what is central to ANOVA, treated in moderate or extreme generality.

For evidence, see Speed, T.P. 1987. What is an analysis of variance? Annals of Statistics 15: 885-910. Eleven discussions follow with a rejoinder by the author rounding it off.

Not the answer you're looking for? Browse other questions tagged anova definition or ask your own question.

1
What method to use to analyse 3 groups of independent variables?
5
Nested ANOVA: Unequal sample sizes? Variance components?
0
What type of ANOVA should I use?
0
4 way anova? 5 way anova? What is it?
10
What question does ANOVA answer?
2
Using a Fixed-Effects ANOVA to help decide whether to conduct a multilevel analysis
0
Confused. What type of ANOVA to use?