My original thought was “post hoc” in a post hoc multiple comparison procedure means that the procedure is taken after an omnibus test (such as ANOVA F test) gives a significant result.

So was my original thought wrong?

How about Scheffe method?

A table from Howell's book (here is link to Google Books, although not having the table): 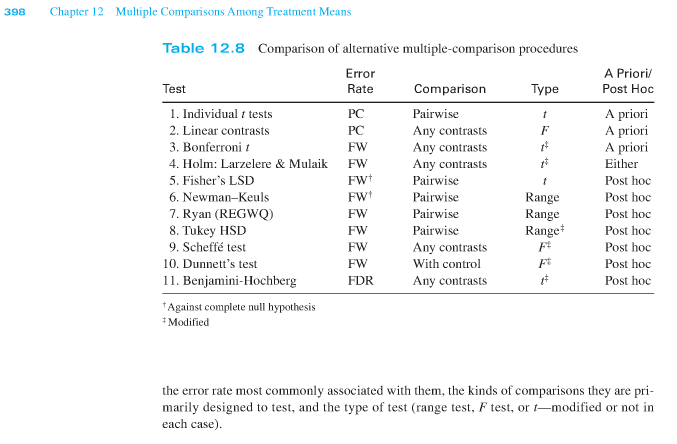 As always, your question implicitly asks for some authoritative answer that might very well not exist. Scheffé's method and Tukey's HSD are usually called post-hoc tests, used for unplanned comparisons and conducted after an omnibus test but that's not a requirement for all such methods.

The main argument for a distinction between planned and unplanned tests is that if you always intended to conduct a limited number of tests (planned contrasts), you don't necessarily need to adjust the error level. If, on the other hand, you are just reporting/testing the differences that look big (post-hoc tests), you might be “capitalizing on chance” and you should adjust not only of the tests you conduct/report but for all possible pairwise comparisons/contrasts in your design.

One issue with all this is that it makes the evaluation of the evidence and the result of a study contingent on the intentions of the experimenter, a most counter-intuitive and undesirable state of affairs. This is sometimes held as an argument against null-hypothesis significance testing as used within psychology.

Your original thought was incorrect. Howell's is correct.

Take the simple t-test, some people just use them for planned or post hoc but adjust their p-values for multiple comparisons.

Both of the tests you mention are typically used post-hoc but could be used for planned tests if the planned tests are expected to have multiple comparison issues. For example, in an ANOVA situation where you do planned contrasts after the ANOVA you may want to test non-orthogonal or simply recognize that there are still problems with multiple comparisons. In that case you might use a traditionally post-hoc procedure.

Also, the conclusions you can reach regarding the two kinds of testing are quite different. A post-hoc test allows you to draw tentative conclusions to guide further research while the planned test speaks directly to the theories that you're examining.

Many people--as well as SPSS--do in fact use the term "post hoc" the way you initially described. Howell's usage may be more common. But rather than argue about which definition is "right," the important thing is to know that when you see the term used it may mean different things. Becase it is so inconsistently used, it's probably best to avoid using the term yourself unless it is absolutely clear what you mean. This problem is discussed in Frane, 2015, "Planned Hypothesis Tests Are Not Necessarily Exempt From Multiplicity Adjustment"

Incidentally, Howell's classification of given multiple comparison procedures as being strictly for a priori or unplanned tests appears to be rather arbitrary.

Not the answer you're looking for? Browse other questions tagged multiple-comparisons terminology post-hoc tukey-hsd-test or ask your own question.

0
R - using contrasts to compare all levels of a variable?

10
Relation between omnibus test and multiple comparison?
5
What do "single-step" and "multi-step" mean in post-hoc testing of ANOVAs?
12
When to correct p-values in multiple comparisons?
1
Is Bonferroni but not Tukey HSD a method of correction for pairwise comparison?
5
Why do planned comparisons and post-hoc tests differ?
2
What are the (practical) differences between Tukey's HSD and the Dunn-Sidak correction procedures?
2
Post hoc test for Friedman test
0
How to obtain the results of the Nemenyi post-hoc test in a table showing grouped pairs?