Exploring a scatter-plot matrix for many variables

I am analyzing a dataset with many parameters (say, 50-200) and I am interested in looking at relations between variables (e.g. in terms of 2-variable scatter plots or 2d histograms). However, for this number of parameters it seems unfeasible to draw a 200x200 array of plots (unless I print it and hang on a wall).

On the other hand, doing only a correlation matrix does not give all information about 2-variable relations.

Is there a way (library or workflow) to explore 2-variable relations for many variables?

I am especially interested in showing results to others (perhaps after some data preprocessing). E.g. something interactive in JavaScript, were I can see scatter-plot matrix for selected fields from a correlation matrix. 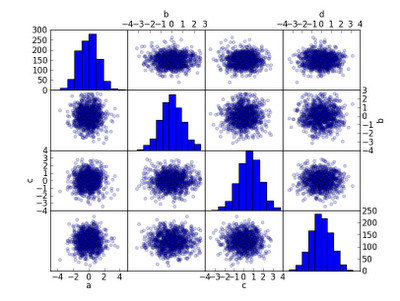 Explore relations between variables is quite vague, but two of the more general goals of examining scatterplots like this I would guess are;

Both reduce the data into more manageble summaries, but have different goals. Identify latent groups one typically reduces the dimensions in the data (e.g. via PCA) and then explores whether variables or cases cluster together in this reduced space. See for example Friendly (2002) or Cook et al. (1995).

Identifying outliers can either mean fitting a model and plotting the deviations from the model (e.g. plotting residuals from a regression model) or reducing the data into its main components and only highlight points that deviate from either the model or the main body of data. E.g. boxplots in one or two dimensions typically only show individual points that are outside of the hinges (Wickham & Stryjewski, 2013). Plotting residuals has the nice property that it should flatten plots (Tukey, 1977), so any evidence of relationships in the remaining point cloud is "interesting". This question on CV has some excellent suggestions of identifying multivariate outliers.

A common way to explore such large SPLOMS is to not plot all of the individual points, but some type of simplified summary and then maybe points that deviate largely from this summary, e.g. confidence ellipses, scagnostic summaries (Wilkinson & Wills, 2008), bivariate box-plots, contour plots. Below is an example of plotting ellipses that define the covariance and superimposing a loess smoother to describe the linear association. 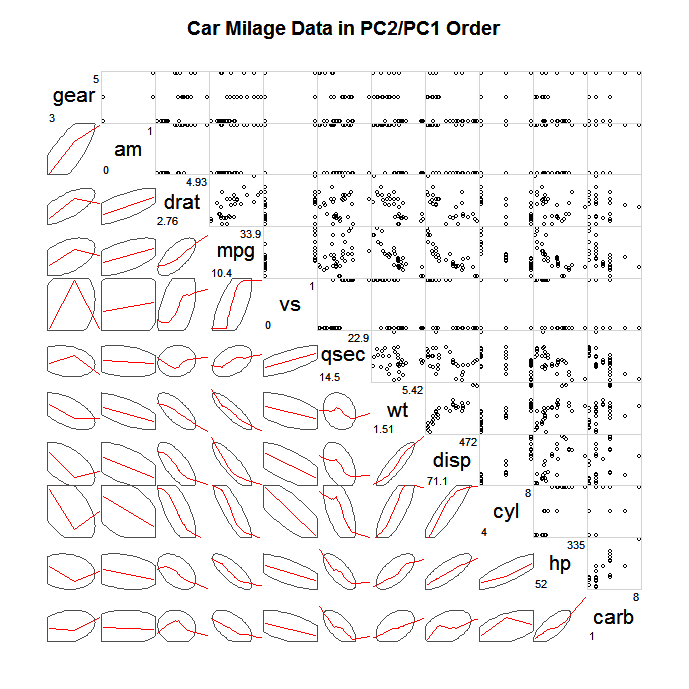 Either way, a real sucessful, interactive plot with so many variables would likely need intelligent sorting (Wilkinson, 2005) and a simple way to filter out variables (in addition to brushing/linking capabilities). Also any realistic dataset would need to have the capabilities to transform axis (e.g. plot the data on logarithmic scale, transform the data by taking roots etc.). Good luck, and don't stick with only one plot!

You could consider using the shiny interface from the pairsD3 R package, which provides a way to interact with scatter plot matrices.

An example with the iris data set:

Not the answer you're looking for? Browse other questions tagged correlation data-visualization multivariate-analysis scatterplot or ask your own question.

11
How to extract information from a scatterplot matrix when you have large N, discrete data, & many variables?