Maybe this question is naive, but:

There's a very straightforward means by which to use almost any correlation measure to fit linear regressions, and which reproduces least squares when you use the Pearson correlation.

Consider that if the slope of a relationship is $\beta$, the correlation between $y-\beta x$ and $x$ should be expected to be $0$.

Indeed, if it were anything other than $0$, there'd be some uncaptured linear relationship - which is what the correlation measure would be picking up.

We might therefore estimate the slope by finding the slope, $\tilde{\beta}$ that makes the sample correlation between $y-\tilde{\beta} x$ and $x$ be $0$. In many cases -- e.g. when using rank-based measures -- the correlation will be a step-function of the value of the slope estimate, so there may be an interval where it's zero. In that case we normally define the sample estimate to be the center of the interval. Often the step function jumps from above zero to below zero at some point, and in that case the estimate is at the jump point.

This only defines the slope, of course; once the slope is estimated, the intercept can be based on a suitable location estimate computed on the residuals $y-\tilde{\beta}x$. With the rank-based correlations the median is a common choice, but there are many other suitable choices.

Here's the correlation plotted against the slope for the car data in R: 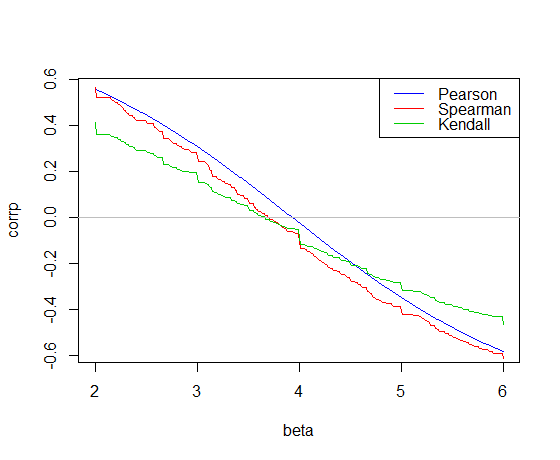 Those are the three slope estimates for our example. Now we need intercepts. For simplicity I'll just use the mean residual for the first intercept and the median for the other two (it doesn't matter very much in this case):

The corresponding fitted lines (using the same color scheme as above) are: 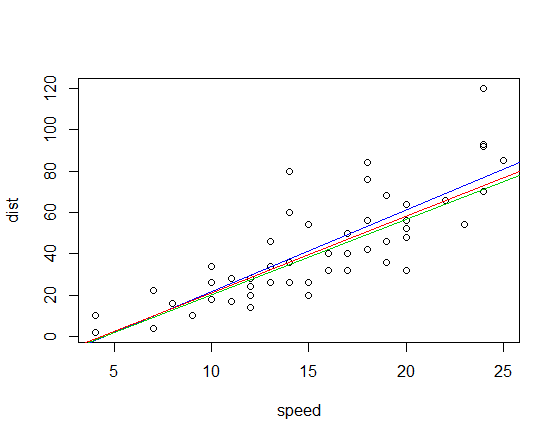 Edit: By comparison, the quadrant-correlation slope is 3.333

Both the Kendall correlation and Spearman correlation slopes are substantially more robust to influential outliers than least squares. See here for a dramatic example in the case of the Kendall.

The proportional odds (PO) model generalizes Wilcoxon and Kruskal-Wallis tests. Spearman's correlation when $X$ is binary is the Wilcoxon test statistic simply translated. So you could say that the PO model is a unifying method. Since the PO model can have as many intercepts as there are unique values of $Y$ (less one), it handles both ordinal and continuous $Y$.

The numerator of the score $\chi^2$ statistic in the PO model is exactly the Wilcoxon statistic.

The PO model is a special case of a more general family of cumulative probability (some call cumulative link) models including the probit, proportional hazards, and complementary log-log models. For a case study see Chapter 15 of my Handouts.

Aaron Han (1987 in econometrics) proposed the Maximum Rank Correlation estimator that fits regression models by maximizing tau. Dougherty and Thomas (2012 in the psychology literature) recently proposed a very similar algorithm. There is an abundance of work on the MRC illustrating its properties.

Not the answer you're looking for? Browse other questions tagged regression correlation pearson-r spearman-rho kendall-tau or ask your own question.

144
Pearson's or Spearman's correlation with non-normal data
91
Kendall Tau or Spearman's rho?
53
Fast linear regression robust to outliers
33
How do the Goodman-Kruskal gamma and the Kendall tau or Spearman rho correlations compare?
18
What regression/estimation is not a MLE?
12
Is it "okay" to plot a regression line for ranked data (Spearman correlation)?
5
transformation to normality of the dependent variable in multiple regression
9
Is parametric equivalent to linear?
5
Pearson correlation between a variable and its square
6
Are prediction and distribution-fitting ever not the same thing?
See more linked questions