Analysis with complex data, anything different?

Say for example you are doing a linear model, but the data $y$ is complex.

My data set is complex, as in all the numbers in $y$ are of the form $(a + bi)$. Is there anything procedurally different when working with such data?

I ask because, you will end up getting complex covariance matrices, and test statistics which are complex valued..

Do you need to use a conjugate transposes instead of transposes when doing least squares? is a complex valued covariance meaningful?

The generalization of least-squares regression to complex-valued variables is straightforward, consisting primarily of replacing matrix transposes by conjugate transposes in the usual matrix formulas. A complex-valued regression, though, corresponds to a complicated multivariate multiple regression whose solution would be much more difficult to obtain using standard (real variable) methods. Thus, when the complex-valued model is meaningful, using complex arithmetic to obtain a solution is strongly recommended. This answer also includes some suggested ways to display the data and present diagnostic plots of the fit.

For simplicity, let's discuss the case of ordinary (univariate) regression, which can be written

I have taken the liberty of naming the independent variable $W$ and the dependent variable $Z$, which is conventional (see, for instance, Lars Ahlfors, Complex Analysis). All that follows is straightforward to extend to the multiple regression setting.

This model has an easily visualized geometric interpretation: multiplication by $\beta_1$ will rescale $w_j$ by the modulus of $\beta_1$ and rotate it around the origin by the argument of $\beta_1$. Subsequently, adding $\beta_0$ translates the result by this amount. The effect of $\varepsilon_j$ is to "jitter" that translation a little bit. Thus, regressing the $z_j$ on the $w_j$ in this manner is an effort to understand the collection of 2D points $(z_j)$ as arising from a constellation of 2D points $(w_j)$ via such a transformation, allowing for some error in the process. This is illustrated below with the figure titled "Fit as a Transformation."

Note that the rescaling and rotation are not just any linear transformation of the plane: they rule out skew transformations, for instance. Thus this model is not the same as a bivariate multiple regression with four parameters.

To connect the complex case with the real case, let's write

Furthermore, for the parameters write

OLS finds $\hat\beta_0$ and $\hat\beta_1$ that minimize the sum of squares of deviations,

At the same time, to see what might be accomplished by casting this into a purely real-variable problem, we may write the OLS objective out in terms of the real components:

This analysis makes it apparent that rewriting the complex regression in terms of the real parts (1) complicates the formulas, (2) obscures the simple geometric interpretation, and (3) would require a generalized multivariate multiple regression (with nontrivial correlations among the variables) to solve. We can do better.

As an example, I take a grid of $w$ values at integral points near the origin in the complex plane. To the transformed values $w\beta$ are added iid errors having a bivariate Gaussian distribution: in particular, the real and imaginary parts of the errors are not independent.

It is difficult to draw the usual scatterplot of $(w_j, z_j)$ for complex variables, because it would consist of points in four dimensions. Instead we can view the scatterplot matrix of their real and imaginary parts. 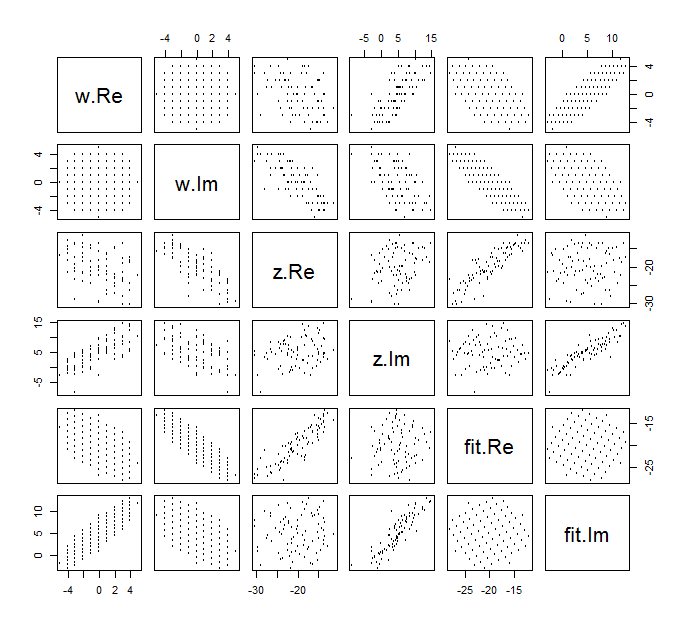 Ignore the fit for now and look at the top four rows and four left columns: these display the data. The circular grid of $w$ is evident in the upper left; it has $81$ points. The scatterplots of the components of $w$ against the components of $z$ show clear correlations. Three of them have negative correlations; only the $y$ (the imaginary part of $z$) and $u$ (the real part of $w$) are positively correlated.

Let's take a closer look at the results of the complex fit. First, a plot of the residuals gives us an indication of their bivariate Gaussian distribution. (The underlying distribution has marginal standard deviations of $2$ and a correlation of $0.8$.) Then, we can plot the magnitudes of the residuals (represented by sizes of the circular symbols) and their arguments (represented by colors exactly as in the first plot) against the fitted values: this plot should look like a random distribution of sizes and colors, which it does. 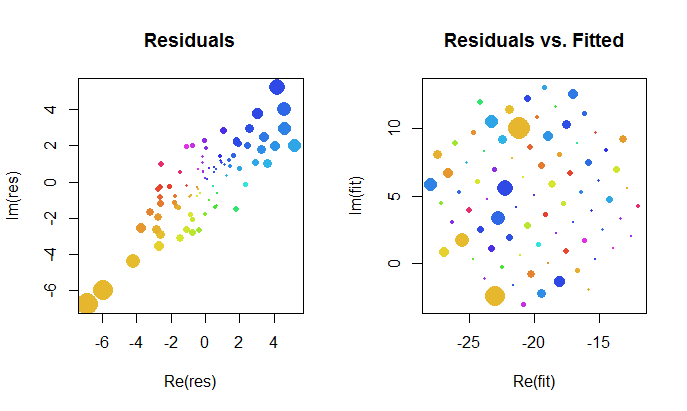 Finally, we can depict the fit in several ways. The fit appeared in the last rows and columns of the scatterplot matrix (q.v.) and may be worth a closer look at this point. Below on the left the fits are plotted as open blue circles and arrows (representing the residuals) connect them to the data, shown as solid red circles. On the right the $(w_j)$ are shown as open black circles filled in with colors corresponding to their arguments; these are connected by arrows to the corresponding values of $(z_j)$. Recall that each arrow represents an expansion by $3/2$ around the origin, rotation by $120$ degrees, and translation by $(-20, 5)$, plus that bivariate Guassian error.

These results, the plots, and the diagnostic plots all suggest that the complex regression formula works correctly and achieves something different than separate linear regressions of the real and imaginary parts of the variables.

The R code to create the data, fits, and plots appears below. Note that the actual solution of $\hat\beta$ is obtained in a single line of code. Additional work--but not too much of it--would be needed to obtain the usual least squares output: the variance-covariance matrix of the fit, standard errors, p-values, etc.

After a nice long google sesh, I found some relevant information on understanding the problem in an alternative manner. It turns out similar problems are somewhat common in statistical signal processing. Instead of starting with a Gaussian likelihood which corresponds to a linear least squares for real data, one starts with a:

Specifically, if you can assume that the distribution of your estimator $\hat{\beta}$ is multivariate normal, then in the case of complex data one would use the complex normal. The computation of the covariance of this estimator is a bit different, and given on the wiki page.

The textbook by Giri, Multivariate Statistical Analysis also covers this.

This issue has come up again on the Mathematica StackExchange and my answer/extended comment there is that @whuber 's excellent answer should be followed.

My answer here is an attempt to extend @whuber 's answer just a little bit by making the error structure a little more explicit. The proposed least squares estimator is what one would use if the bivariate error distribution has a zero correlation between the real and imaginary components. (But the data generated has a error correlation of 0.8.)

If one has access to a symbolic algebra program, then some of the messiness of constructing maximum likelihood estimators of the parameters (both the "fixed" effects and the covariance structure) can be eliminated. Below I use the same data as in @whuber 's answer and construct the maximum likelihood estimates by assuming $\rho=0$ and then by assuming $\rho\neq0$. I've used Mathematica but I suspect any other symbolic algebra program can do something similar. (And I've first posted a picture of the code and output followed by the actual code in an appendix as I can't get the Mathematica code to look as it should with just using text.) 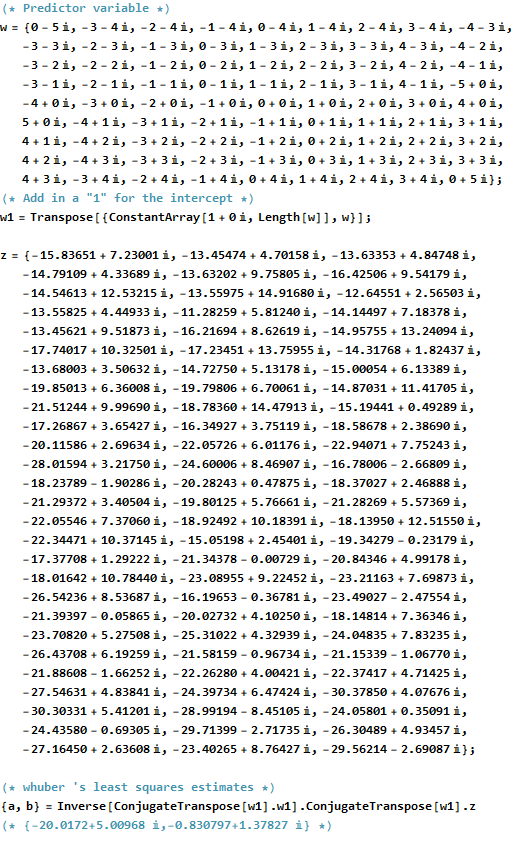 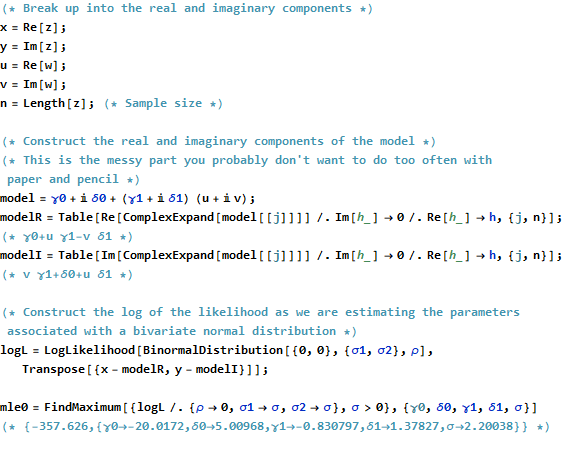 We see that the maximum likelihood estimates which assume that $\rho=0$ match perfectly with the total least squares estimates.

Now let the data determine an estimate for $\rho$:

We see that $\gamma_0$ and $\delta_0$ are essentially identical whether or not we allow for the estimation of $\rho$. But $\gamma_1$ is much closer to the value that generated the data (although inferences with a sample size of 1 shouldn't be considered definitive to say the least) and the log of the likelihood is much higher.

My point in all of this is that the model being fit needs to be made completely explicit and that symbolic algebra programs can help alleviate the messiness. (And, of course, the maximum likelihood estimators assume a bivariate normal distribution which the least squares estimators do not assume.)

While @whuber has a beautifully-illustrated and well-explained answer, I think it's a simplified model that misses some of the power of the complex space.

Linear least-squares regression on reals is equivalent to the following model with inputs $w$, parameters $\beta$, and target $x$:

where $\epsilon$ is normally-distributed with zero mean and some (typically constant) variance.

I suggest that complex linear regression be defined as follows:

There are two major differences.

First, there is an additional degree of freedom $\beta_2$ that allows phase sensitivity. You might not want that, but you can easily have that.

Second, $\epsilon$ is a complex normal distribution with zero mean and some variance and “pseudo-variance”.

Going back to the real model, the ordinary least squares solution comes out minimizing the loss, which is the negative log-likelihood. For a normal distribution, this is the parabola:

Here's an image of a complex normal distribution's density: 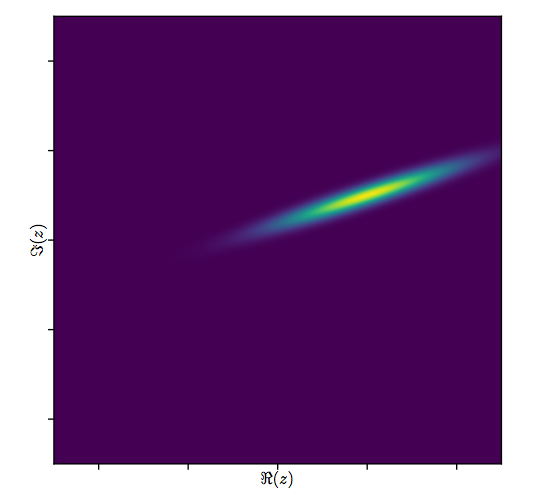 Notice how it's asymmetric. Without the $b$ parameter, it can't be asymmetric.

This complicates the regression although I'm pretty sure the solution is still analytical. I solved it for the case of one input, and I'm happy to transcribe my solution here, but I have a feeling that whuber might solve the general case.

Not the answer you're looking for? Browse other questions tagged regression anova data-transformation complex-numbers or ask your own question.

4
Using Covariance Estimator to Perform Linear Regression?
4
If not minimizing SSEs, what am I doing?
0
Weighted least-squares negative fitted values
7
If $\operatorname{Var}\left(\epsilon_i\right) = h\left(X\right) \neq \sigma^2$, what can we know about $\operatorname{Var}\left(\hat{\beta}\right)$?
3
Getting the posterior for Bayesian linear regression with a flat prior
2
Notation for ordinary and ridge regression
4
Variance estimation for regression coefficients with complex survey data