How to fit a discrete distribution to count data?

I have the following histogram of count data. And I would like to fit a discrete distribution to it. I am not sure how I should go about this. 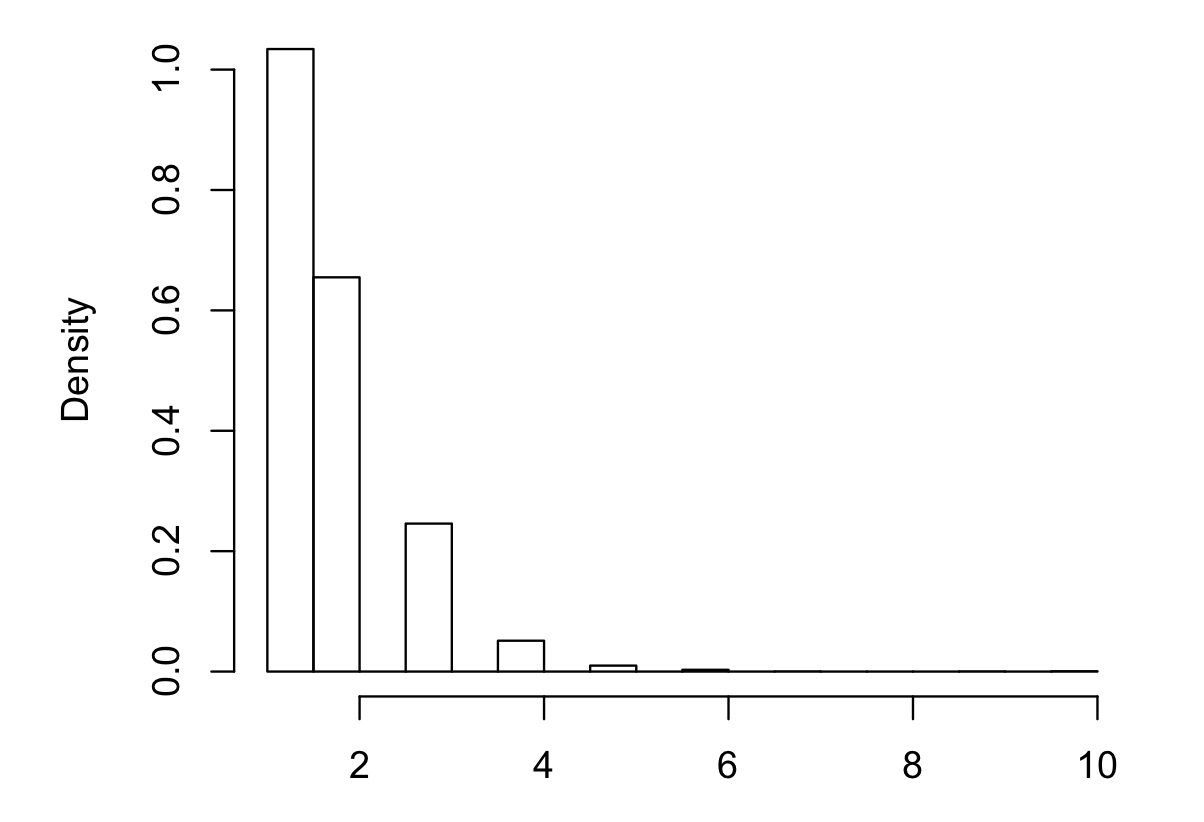 I am not sure if this method is correct or not.

Is there a general method to tackle a problem like this?

This is a frequency table of the count data. In my problem, I am only focusing on non-zero counts.

UPDATE: I would like to ask: I used the fitdistr function in R to obtain the parameters for fitting the data.

I then plot the probability mass function of Poisson distribution on top of the histogram.

However, it seems like the Poisson distribution fails to model the count data. Is there anything I can do?

There are three main methods* used to fit (estimate the parameters of) discrete distributions.

This finds the parameter values that give the best chance of supplying your sample (given the other assumptions, like independence, constant parameters, etc)

This minimizes the chi-square goodness of fit statistic over the discrete distribution, though sometimes with larger data sets, the end-categories might be combined for convenience. It often works fairly well, and it even arguably has some advantages over ML in particular situations, but generally it must be iterated to convergence, in which case most people tend to prefer ML.

The first two methods are also used for continuous distributions; the third is usually not used in that case.

These by no means comprise an exhaustive list, and it would be quite possible to estimate parameters by minimizing the KS-statistic for example – and even (if you adjust for the discreteness), to get a joint consonance region from it, if you were so inclined. Since you’re working in R, ML estimation is quite easy to achieve for the negative binomial. If your sample were in x, it’s as simple as library(MASS);fitdistr (x,"negative binomial"):

Those are the parameter estimates and their (asymptotic) standard errors.

In the case of the Poisson distribution, MLE and MoM both estimate the Poisson parameter at the sample mean.

If you'd like to see examples, you should post some actual counts. Note that your histogram has been done with bins chosen so that the 0 and 1 categories are combined and we don't have the raw counts.

As near as I can guess, your data are roughly as follows:

But the big numbers will be uncertain (it depends heavily on how accurately the low-counts are represented by the pixel-counts of their bar-heights) and it could be some multiple of those numbers, like twice those numbers (the raw counts affect the standard errors, so it matters whether they're about those values or twice as big)

The combining of the first two groups makes it a little bit awkward (it's possible to do, but less straightforward if you combine some categories. A lot of information is in those first two groups so it's best not to just let the default histogram lump them).

* Other methods of fitting discrete distributions are possible of course (one might match quantiles or minimise other goodness of fit statistics for example). The ones I mention appear to be the most common.

In an edit, you gave some data, and added a new question:

"This is a frequency table of the count data. In my problem, I am only focusing on non-zero counts.

Can someone give me an example of how you would carry out the chi-squared goodness of fit test here?"

This leads to further comments:

UPDATE: The supplementary question about a chi-square test has now been deleted. For the moment I am letting #3 above stand, in case someone else follows the same path of wanting a chi-square test.

Not the answer you're looking for? Browse other questions tagged r poisson-distribution discrete-data computational-statistics negative-binomial-distribution or ask your own question.

1
How to fit a discrete distribution that can only be sampled from to count data?

26
Kolmogorov-Smirnov with discrete data: What is proper use of dgof::ks.test in R?
4
Test identicality of discrete distributions
3
Can categorical variables be treated as count data?
9
Poisson regression for count data - predictions
8
What to do when count data does not fit a Poisson distribution