Why is it difficult to incorporate uncertainty in random effects when making predictions from mixed models?

There are several threads on R-sig-ME about obtaining confidence intervals for predictions using lme4 and nlme in R. For example here and here in 2010, including some commentary by Dougals Bates, one of the authors of both packages. I hesitate to quote him verbatim, for fear of them being taken out of context, but anyway, one comment he makes is

"You are combining parameters and random variables in your predictions and I'm not sure what it would mean to assess the variability of those predictions. A Bayesian may be able to make sense of it but I can't get my head around it." https://stat.ethz.ch/pipermail/r-sig-mixed-models/2010q1/003447.html

I know that the Bayesian glmm package MCMCglmm can produce credible intervals for predictions.

Lately, the development version of lme4 on github has been given a predict method, but it is accompanied by the following comment:

" @note There is no option for computing standard errors of predictions because it is difficult to define an efficient method that incorporates uncertainty in the variance parameters; we recommend \code{\link{bootMer}} for this task." https://github.com/lme4/lme4/blob/master/R/predict.R

So, why is it difficult to incorporate uncertainty in random effects when making predictions from mixed models in a frequentist setting ?

I'm not sure about the predict method comment but a primary issue is related to generating easily interpretable variance measures, not variance measures per se. Bates isn't commenting in the first quote on whether you can do it, just what it means.

Take a simple multi-level model of a two level repeated measures design. Let's say you have the following data where each line is a subject: 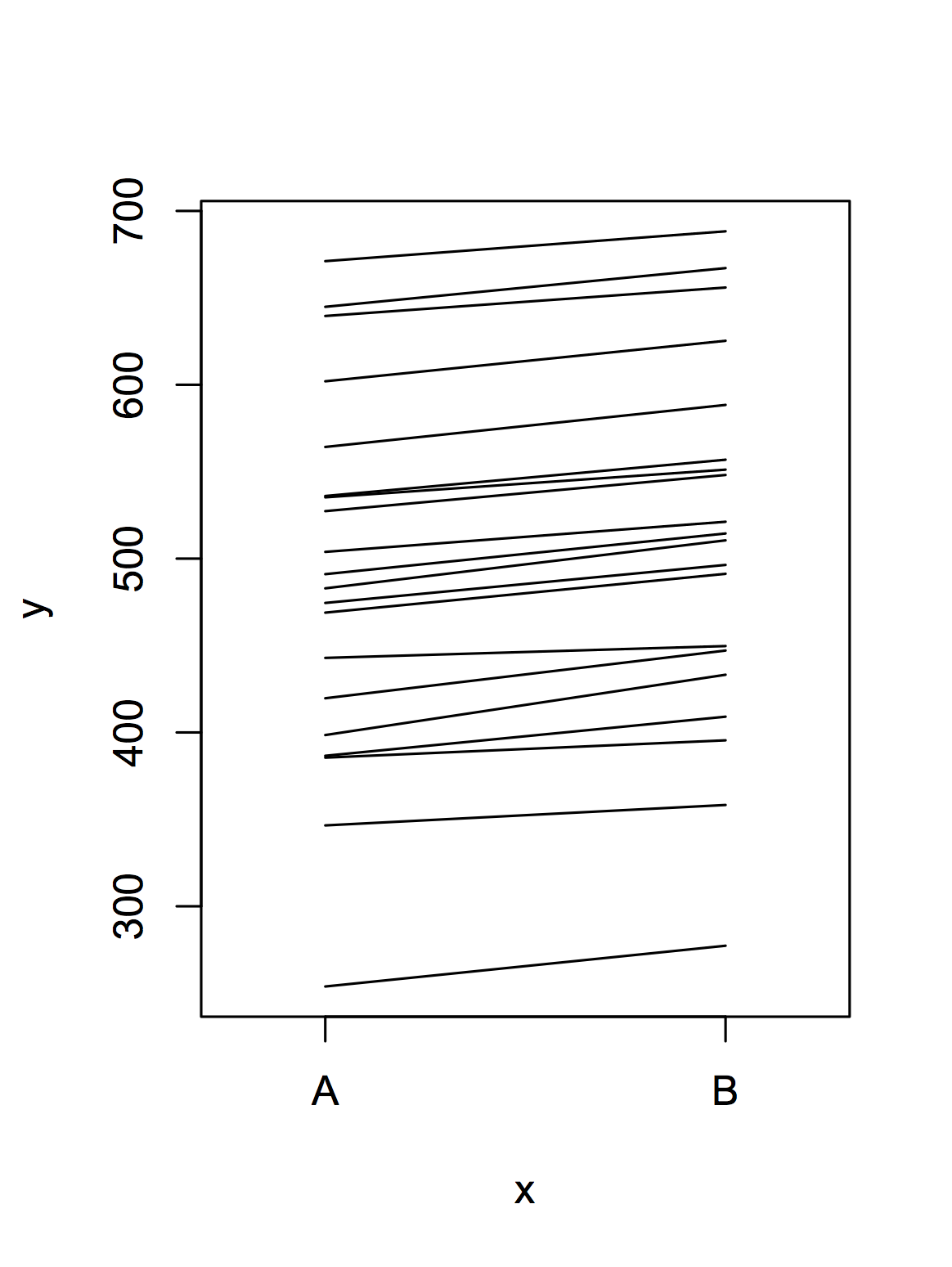 In lmer the model could be expressed as:

You're predicting the y-value from x as a fixed effect (the difference between A and B); and the intercept a random effect**. Look carefully at the graph and note that while there is variability in the x effect for each subject (each line's slope) it's relatively small compared to the variability across subjects (the height of each line).

You will have a variability of the effect of x that's relatively easily estimated. You could say something about a confidence interval around that. But note that, this confidence interval is going to have small relation to the prediction of any particular y value because the y value is influenced by a combination of effect and subject variance that's different from the variability of the effect alone.

When Bates writes things like you've quoted I imagine he's often thinking of much more complex multi-level designs that this doesn't even approach. But even if you just consider this simple example you come down to wondering what kind of real meaning can be extracted from combining all of the variance measures together.

** I ignored the fixed effect of intercept for simplicity and just treat it as a random effect. You could extract similar conclusions from an even simpler model with a random and fixed intercept only but I think that it would be harder to convey. In that case, again, the fixed effect and random effect are parsed for a reason and mean different things and putting their variability back together for predicted values causes that variability to make little sense with respect to the model.

For a long time I have wondered about the seemingly common belief that there is some fundamental difference in fixed and random effects for (generally nonlinear) mixed effects models. This belief is for example stated by Bates in the following response

Bates clearly states that he believes there is a fundamental difference between fixed and random effects so that they can not be combined. I think he is wrong and I hope to convince a few readers of an alternative point of view. I take a frequentist approach so what I want to do is to define a notion of profile likelihood for a function of both the fixed and random effects. To motivate the discussion suppose we have a two parameter model with parameters x and u (nothing about random effects so far). Let $L(x,u)$ be the likelihood function where we supress any reference to the data. Let $g(x,u)$ be any (nice) function of x and u. The profile likelihood $P_g(t)$ for the function $g$ is given by

I believe that no one would argue with this. Now suppose we have a prior probability distribution $p(u)$ for u. Then I would claim that the profile likelihood for $g$ still makes sense, but we should modify (1) by including the prior.

$$P_g(t)=\max_{x,u} \{L(x,u)p(u)\ |\ g(x,u)=t \} \eqno(2) $$ Note that since $u$ is a parameter with a prior it is exactly the same as what is referred to as a random effect. So why do many people think that random effect parameters are somehow different. The difference I think comes from the usual practice of parameter estimation for them. What makes random effects ``different'' is that there are a lot of them in many models. As a result to get useful estimates for the fixed effects (or other parameters) it is necessary to treat the random effects in a different way. What we do is to integrate them out of the model. In the above model we would form the likelihood $F(x)$ where $$F(x) = \int L(x,u)p(u)du$$ Now the $u$ are gone. So if all we have is $F(x)$ it seems to make no sense to talk about the profile likelihood for some function $g(x,u)$.

This profile likelihood is a well defined concept and stands on it own. However to be useful in practice one needs to be able to calculate its value, at least approximately. I believe that for many models the function $F(x,s)$ can be approximated well enough using a variant of the Laplace approximation. Define $\hat x(s),\hat u(s)$ by $$ \hat x(s),\hat u(s)= \max_{x,u} \{L(x,u)p(u)\ |\ g(x,u)=s\}$$ Let H be the hessian of the log of the function $-L(x,u)p(u)$ with respect to the parameters $x$ and $u$.

Not the answer you're looking for? Browse other questions tagged mixed-model or ask your own question.