Probability of an event occurring between two events?

So throughout the entire data set we are looking for the probability of events / subseries(?) like these:

So how would I approach solving this problem. What is the solution I am looking for?

Now assuming I can have / expand this data set into a much much larger data set and I have much more data available, sooner or later the obvious logical conclusion is in fact that EventId 1 2 and 3 tend to follow EventId 19 and 18 more often than for the other EventId's.

But I would have to do more analysis on this using Markov chains or some other tool I assume which is why I said for the moment being, let's just assume that the EventId's are independent and random.

So yeah, I'm pretty much stuck, if anyone has an idea how to approach this problem then I'd appreciate it, quite a lot.

If coming up with an analytical solution is too difficult, you still have the option to estimate the probability of the occurrence of subsequences through simulation. One advantage of this approach is that it's pretty straight-forward to try out different assumptions. A disadvantage might be that it takes longer to compute the probabilities. 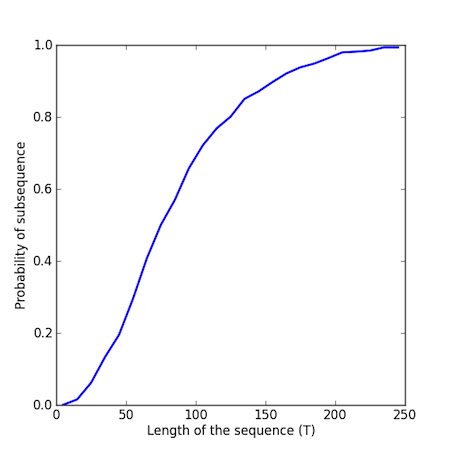 This is known as the Monte Carlo method. A simple example would be estimating the probability that rolling a die gives a six, $P(X = 6)$. The typical way we would estimate this is of course throwing the die $N$ times and counting the number of times it comes up six. We can think of this as estimating the expectation value

The Monte Carlo method can be applied whenever we can write the quantity of interest as an expectation. In principle, we don't even need to know $P(X = x)$, we just need to be able to draw samples from the distribution. In your case, $X$ is a sequence of numbers and $s(x)$ is 1 whenever $x$ contains the desired subsequence.

Not the answer you're looking for? Browse other questions tagged probability conditional-probability or ask your own question.

4
Is my interpretation of Bayesian probability and inference correct?
4
Conditional probability of an event given two independent events
1
Covariance between two random variables with different number of values?
0
probability of two events occurring in same time
5
Probability one Weibull is less than another, given upper-bound
1
Just How Independent are Events Anyways
0
What is a probability that none of the events happens 3 times out of 3
4
Expected number of occurrences of events with probability dependent on previous events (for example lottery jackpots)