Why do we use a one-tailed test F-test in analysis of variance (ANOVA)?

Can you give the reason for using a one tailed test in the analysis of variance test?

F tests are most commonly used for two purposes:

Let's consider each in turn:

1) F tests in ANOVA (and similarly, the usual kinds of chi-square tests for count data) are constructed so that the more the data are consistent with the alternative hypothesis, the larger the test statistic tends to be, while arrangements of sample data that looks most consistent with the null corresponds to the smallest values of the test statistic.

Consider three samples (of size 10, with equal sample variance), and arrange them to have equal sample means, and then move their means around in different patterns. As the variation in the sample means increases from zero, the F statistic becomes larger: 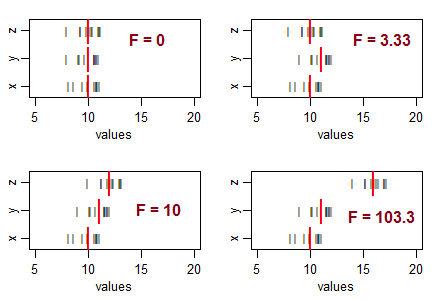 Here's an illustration that might help you see that we only want to reject when F is in its upper tail: 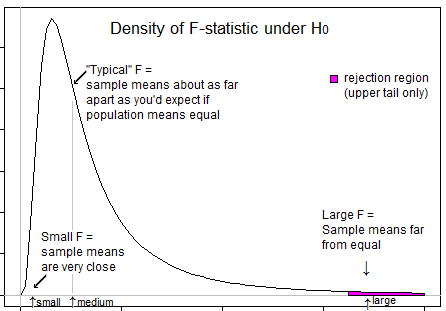 That is, for testing whether the ratio of population variances differs from 1, you'll want to reject the null for both large and small values of F.

* (Leaving aside the issue of the high sensitivity to the distributional assumption of this test (there are better alternatives) and also the issue that if you're interested in suitability of ANOVA equal-variance assumptions, your best strategy probably isn't a formal test.)

Not the answer you're looking for? Browse other questions tagged anova f-test sums-of-squares f-distribution or ask your own question.

3
When should an F-test be one sided vs two sided?
17
Why do the ANOVA assumptions (equality of variance, normality of residuals) matter?
5
Chi-Square-Test: Why is the chi-squared test a one-tailed test?
5
What is an F test?
5
null hypothesis change
4
P-value of F-test to compare two variances (var.test in R)
2
Why does overall-F-test is considering right tailed only?
0
Why OLS F Statistic close to one when there is no relationship?
-1
Asking about the meaning of abbreviation f(1, 78)
1
1-sided vs 2-sided general M*N independence tests like Fisher exact or $\chi^2$ tests
See more linked questions

7
"One-tailed" Levene Test
1
One tailed or two tailed test?
5
Why do we make a F-Test rather than a Beta-Test in ANOVAs?
1
Writing statistical analysis for Thesis (two tailed vs. one tailed)
2
Advantages of using independent samples T-test over one-way ANOVA for comparing two groups
1
Kruskal–Wallis one-way analysis of variance is related to what kind of regression?
2
Why does overall-F-test is considering right tailed only?