ROC and multiROC analysis: how to calculate optimal cutpoint?

I'm trying to understand how to compute the optimal cut-point for a ROC curve (the value at which the sensitivity and specificity are maximized). I'm using the dataset aSAH from the package pROC.

The outcome variable could be explained by two independent variables: s100b and ndka. Using the syntax of the Epi package, I've created two models:

The output is illustrated in the following two graphs: 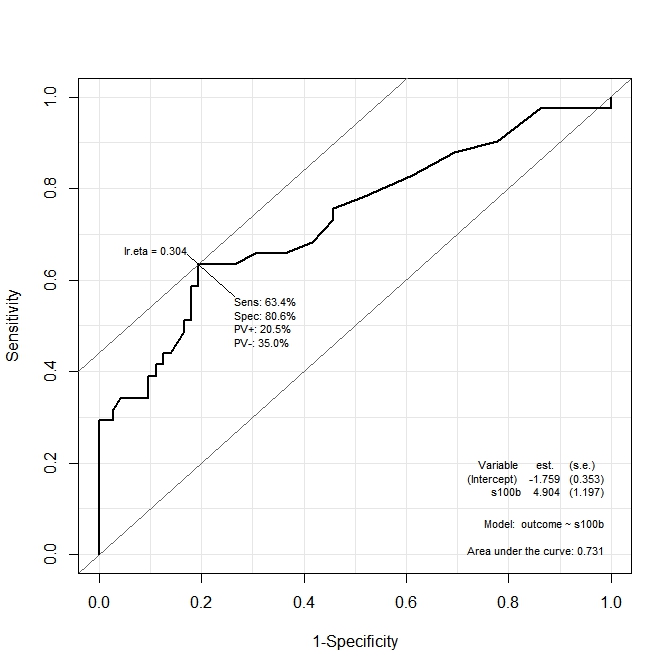 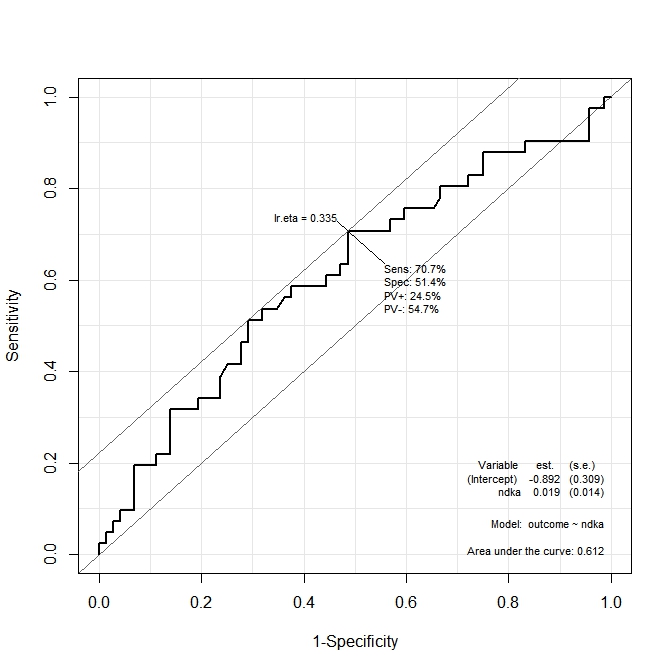 Now suppose I create a model taking into account both variable:

The graph obtained is: 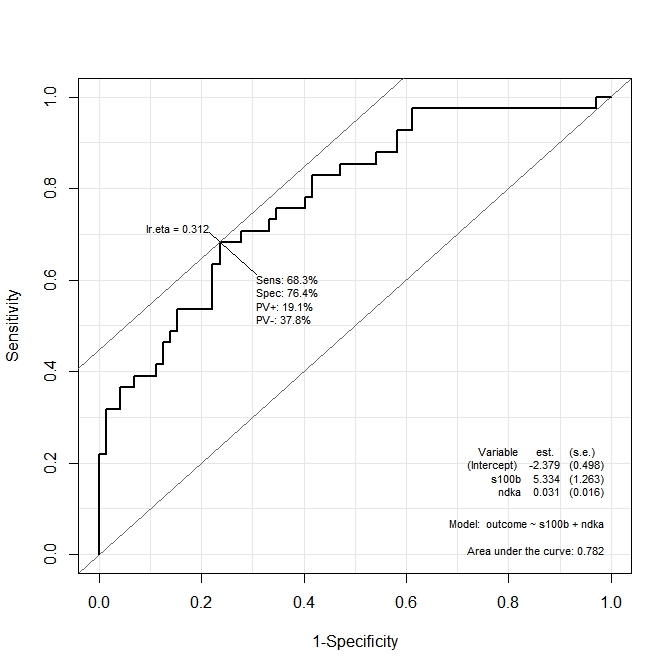 I suppose this second question is related to multiROC analysis, but the documentation of the Epi package does not explain how to calculate the optimal cutpoint for both variables used in the model.

My question appears very similar to this question from reasearchGate, which says in short:

The determination of cut-off score that represents a better trade-off between sensitivity and specificity of a measure is straightforward. However, for multivariate ROC curve analysis, I have noted that most of the researchers have focused on algorithms to determine the overall accuracy of a linear combination of several indicators (variables) in terms of AUC. [...]

However, these methods do not mention how to decide a combination of cut-off scores associated with the multiple indicators that gives the best diagnostic accuracy.

A possible solution is that proposed by Shultz in his paper, but from this article I'm not able to understand how to compute optimal cutpoint for a multivariate ROC curve.

Maybe the solution from the Epi package is not ideal, so any other helpful links will be appreciated.

To elaborate on Frank Harrell's answer, what the Epi package did was to fit a logistic regression, and make a ROC curve with outcome predictions of the following form:

In other words, you can't establish cut-offs on the inputs - you have to do it on the outputs, and that's the whole point of the model.

It is not appropriate to seek cutoffs on input variables, but instead only on the output (e.g., predicted risk from a multivariable model). That is because the cutoff for x1 would depend on the continuous value of x2. And seeking a cutpoint on $\hat{Y}$, to obtain optimum decisions, requires a utility/loss/cost function and this has nothing to do with ROC curves.

I would guess lr.eta is the linear predictor—the logit—from the fitted model, as $\eta$ is a commonly used symbol for it; or, if not, the probability from the fitted model. (Turns out it's the latter: see https://stackoverflow.com/a/38532555/1864816.) You can check the code in ROC. In any case you'll be able to calculate it from the model coefficients for any number of predictors. (Note that it won't be a cut-off for each predictor separately, but a function of all predictors.)

Your first sentence should say (as evidenced by the graphs) that you're looking for where the sum of sensitivity & specificity is maximized. But why is this "optimal"? Does a false positive result have the same import as a false negative result? See here.

Not the answer you're looking for? Browse other questions tagged r roc sensitivity-analysis sensitivity-specificity or ask your own question.

0
Finding optimal cutoff point
1
How can I get cut-off point in multivariated ROC analysis
5
Based only on these sensitivity and specificity values, what is the best decision method?
0
Identifying threshold from Youden Index - Using ROC curve to calculate minimally important change (MIC)

1
How to calculate a ROC curve? What kind of inputs do you need for that?
4
Computing by hand the optimal threshold value for a biomarker using the Youden Index
5
How is the optimal probability cut-off in a ROC defined by the R package Epi?
0
R caret ROC optimal cut-off in original values
2
Where does a ROC curve of a perfect classifier start?
0
How to decide threshold values for AUC?
1
ROC curves: can a cut-point (cut-off) be "useful", or is it a term reserved to parameters only?
1
Threshold ROC vs. Cut-Off in confusion matrix (binary regression)