I'm not too familiar with survival analysis, so this may be a somewhat basic question.

I am interested in the time between two events [$A$ - medication] and [$B$ - time of first treatment], the latter which can be equal to $A$. Specifically, I want to know if this varies across years.

So instead, I'm considering the value $A-B$ to be censored if $B$ falls within one year of the subject entering the dataset, and then constructing a KM curve. However, the time length covered by each group will still end up different, like so: 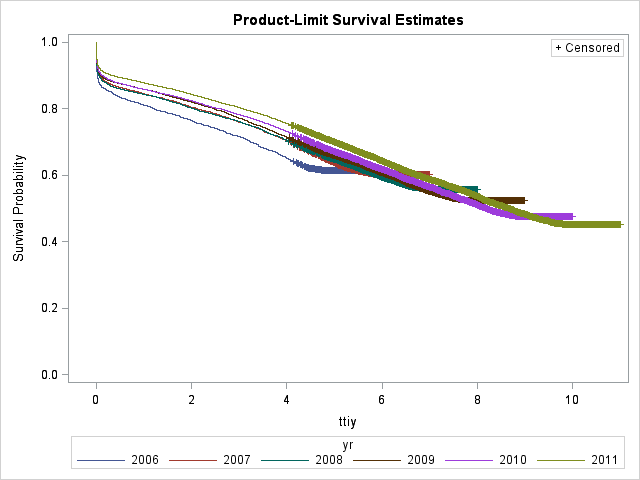 By visual inspection, the survival curves are different, though only the 2011 vs any other group comparisons are significant by the logrank test.

Alternatively, I can truncate time differences greater than 5 years (considering them censored): 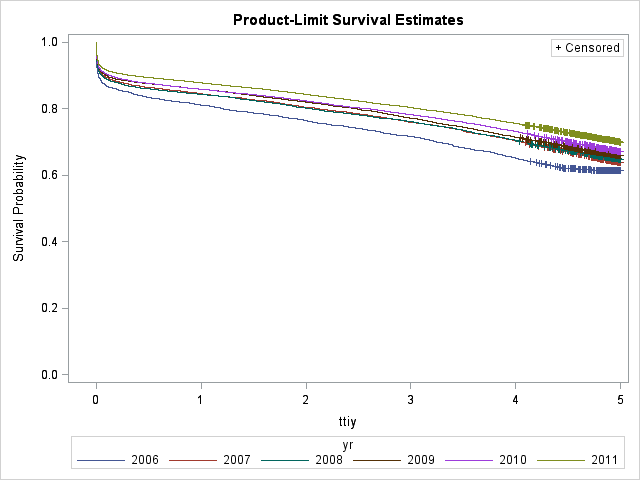 This results in the exact same curve for years <= 5 as expected, however, the logrank test returns more significant differences (2010 vs any other group).

I'm not sure which of these setups is more appropriate.

Also note that time A and time B may be influenced by the same covariates (e.g. disease severity, but also year due to treatment protocol changes), so using B-A as the time of interest may be problematic. A classic example of this problem is the change in breast cancer mortality due to earlier detection.

First off, I would switch to time at risk instead of calendar time approach: that is, the time horizon of your analysis should start when patient starts to be at risk for the event you're investigating. This makes sense in that, in empirical study, time for patients enrollment can lasts two or more years, but calendar year is meaningless and survival analysis starts when patients becomes at t0. As a sidelight, time when patient enters the study may differ from time at risk (let's assume that, to be considered (or not) at risk, patient enters the study and undergoes a lab routine to assess her/his risk factors for the disease under investigation. If all the lab tests are negative for those risk factors, patient is not at risk). As a second remark, your research approach (KM curve) is a non-parametric one. Therefore, it "lets data speak for themselves", but doesn't allow you to consider risk predictors on the right hand side of the equation (as some other previous replies pointed out). If you suspect that time can impact on the risk of the event you're interested in, you may want to test this assumption via a parametric model for survival analysis, such as Weibull regression.

Not the answer you're looking for? Browse other questions tagged survival kaplan-meier or ask your own question.

6
How should I deal with the consequences of proportional hazards violations in log-rank (and related) tests?
1
Risk table for a Kaplan Meier plot in R
2
Survival in time (Kaplan Meier) when start time is unknown: is it possible and what methods exist?
0
right or interval censored survival curve for survival within a survey period
5
interval censored survival analysis with time dependent covariates
0
How should I decide which test to use to look for differences in Kaplan-Meier curves?