Is it possible to extract data points from moving average data?

In other words, if a set of data only has simple moving averages of the previous 30 points, is it possible to extract the original data points?

+1 to fabee's answer, which is complete. Just a note to translate it into R, based on the packages that I've found to do the operations at hand. In my case, I had data that is NOAA temperature forecasts on a three-month basis: Jan-Feb-Mar, Feb-Mar-Apr, Mar-Apr-May, etc, and I wanted to break it out into (approximate) monthly values, assuming that each three-month period's temperature is essentially an average.

Which works great for me. Thanks @fabee.

EDIT: OK, back-translating my R to Python, I get:

(Which took a lot longer to debug than the R version. First because I'm not as familiar with Python as with R, but also because R is much more usable interactively.)

which has $30$ ones which are shifted through as you advance through the rows until the $30$ ones hit the end of the matrix. Here the averaged vector $\mathbf y$ has 1970 dimensions. The matrix has $1970$ rows and $2000$ columns. Therefore, it is not invertible.

The problem with the equation system (and the matrix) is that it has more unknowns than equations. Therefore, you cannot uniquely identify your unknowns $x_1,...,x_n$. The intuitive reason is that you loose dimensions while averaging, because the first thirty dimensions of $\mathbf x$ don't get a corresponding element in $\mathbf y$ since you cannot shift the averaging window outside of $\mathbf x$.

One way to make $A$ or, equivalently the equation system, solvable is to come up with $30$ more equations (or $30$ more rows for $A$) that provide additional information (are linearly independent to all other rows of $A$).

Another, maybe easier, way is to use the pseudoinverse $A^\dagger$ of $A$. This generates a vector $\mathbf z = A^\dagger\mathbf y$ which has the same dimension as $\mathbf x$ and which has the property that it minimizes the quadratic distance between $\mathbf y$ and $A\mathbf z$ (see wikipedia).

This seems to work quite well. Here is an example where I drew $2000$ examples from a Gaussian distribution, added five, averaged them, and reconstructed the $\mathbf x$ via the pseudoinverse.

Here would be the python code to generate the signals from my example:

This is very related with this question cumsum with shift of n I asked in SO.

I also answered in SO the same question as this one but it has been closed so I include here the answer again because I think is more focus in the software implementation than from the mathematical understanding (even though I think they are equivalent mathematically).

The question asked the same thing, how to reverse the moving average, a.k.a in pandas as rolling mean.

The code sample of the question:

With this function cumsum_shift(n) which you have to think of it as the inverse of the pandas/numpy method diff(periods = n), you can reverse the moving average up to constant if you don't have the initial values.

The definition of cumsum_shift(n) that generalizes the cumsum() which is this one with n = 1 (n is called shift in the code):

Then assuming the size of the window is 10 win_size = 10 then if you multiply by 10 the diff'ed of the rolling mean and then "cumsum shift it" with a shift of 10, you obtain the original serie up to the intial values.

This code recovers exactly y from y_roll because you have the initial values.

You can see it plotting it (in my case with plotly) that y and y_unrolled are exactly the same (just the red one). 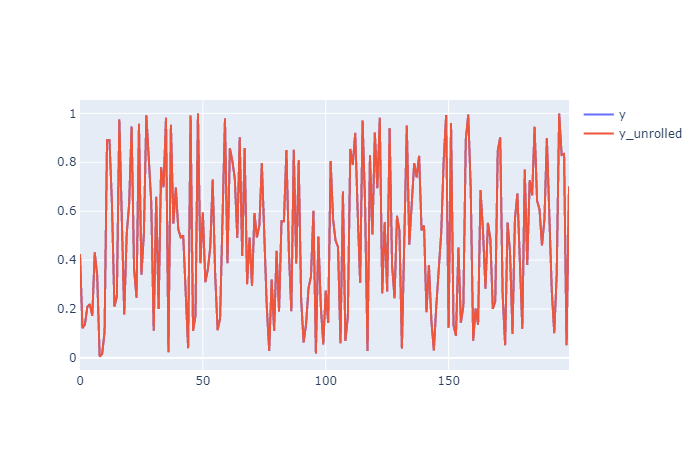 Now doing the same thing to y_roll_predicted to obtain y_predicted_unrolled.

In this case the result are not exactly the same, notice how the initial values are from y and then y_roll_predicted incorporate noise to y_roll so the "unrolling" cannot recover exactly the original one.

Here a plot zoomed in in a smaller range to see it better: 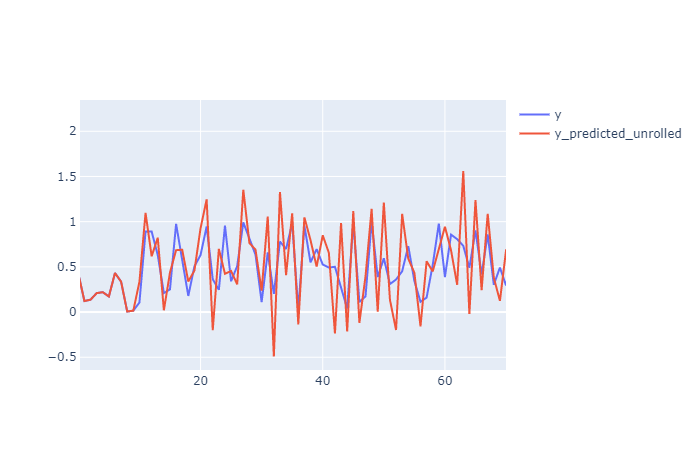 Hope this can help somebody.