statistical test to see if relationship is linear or non-linear

I have an example data set as follows: 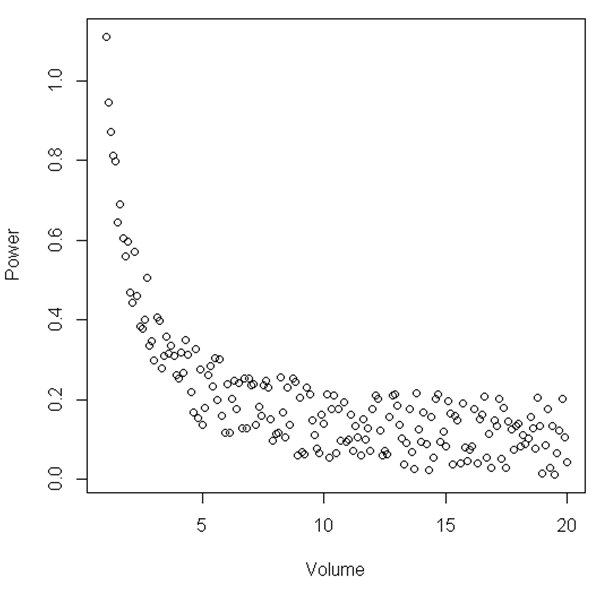 From the figure, it can be suggested that between a certain range of 'Volume' and 'Power' the relationship is linear, then when 'Volume' becomes relatively small the relationship becomes non-linear. Is there a statistical test for illustrating this?

With regards to some of the recommendations shown in the responses to the OP:

The example shown here is simply an example, the dataset I have looks similar to the relationship seen here although noisier. The analysis that I have conducted so far shows that when I analyse a volume of a specific liquid, the power of a signal drastically increases when there is a low volume. So, say is I only had an environment where the volume was between 15 and 20, it would almost look like a linear relationship. However, by increasing the range of points i.e. having smaller volumes, we see that the relationship is not linear at all. I am now looking for some statistical advice on how to statistically show this. Hope this makes sense.

This is basically a model selection problem. I encourage you to select a set of physically-plausible models (linear, exponential, maybe a discontinuous linear relationship) and uses Akaike Information Criterion or Bayesian Information Criterion to select the best - keeping in mind the heteroscedasticity issue that @whuber points out.

Have you tried googling this!? One way to do this is to fit higher power or other non linear terms to your model and test if their coefficients are significantly different from 0.

The other problem you have is that your data is heteroskedastic, which violates the normality assumption for regression data. The link provided also gives examples of testing for this.

I suggest using nonlinear regression to fit one model to all your data. What is the point of picking an arbitrary volume and fitting one model to volumes less than that and another model to larger volumes? Is there any reason, beyond the look of the figure, for using 5 as a sharp threshold? Do you really believe that after a particular volume threshold, the ideal curve is linear? Isn't it more likely that it approaches horizontal as volume increases, but is never quite linear?

Of course, the selection of analysis tool has to depend on what scientific questions you are trying to answer and your prior knowledge of the system.

Not the answer you're looking for? Browse other questions tagged r hypothesis-testing nonlinear-regression goodness-of-fit heteroscedasticity or ask your own question.

16
Measures of residuals heteroscedasticity
10
How to choose the best transformation to achieve linearity?

39
Simulation of logistic regression power analysis - designed experiments
6
Residual, linear least squares and quality engineering
1
Can I use a non-linear mixed model for data containing both linear and quadratic relationship?
1
Statistical test for difference in mean of means non-normally distributed, different number of cases
2
Non-Linear Relationship for a Log-Log Model
2
What test to see if variances are different when data are non-normal
5
Statistical test to determine if a relationship is linear?
3
R - Transformations of continuous predictors, using predicted values