I have performed a number of tests to detect any presence of autocorrelation in my monthly return series. The test results confirm that the standard errors are not independent. A Durbin-Watson test result shows an upper bound violation with a d-statistics of 2.16, which implicates (first order) negative autocorrelation. A second, Breusch-Godfrey test, performed to examine higher order correlation points outs that for the first 12 lags the tests fails to reject the null of no serial correlation. Isn’t this strange since the test results are contradicting each other? 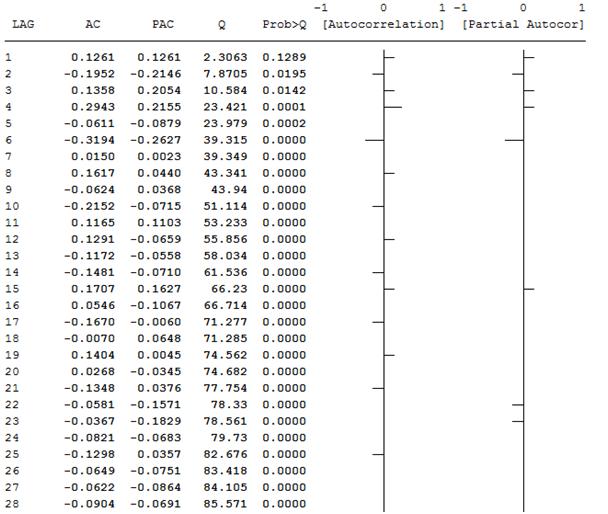 What I came across so far while searching on the internet for solutions to solve the autocorrelation are a large number of solutions. In order to obtain meaningful results from my OLS-regression I thought it was best to include a lagged dependent variable in the regression and generate Newey-West standard errors. This is probably a relatively simple but accessible approach for inexperienced statisticians, like myself.

My question is; Is this a correct and sufficient approach of tackling this particular autocorrelation problem in my data, or should I think about more advanced models?

A link to the time series file;Time_Series_Data

The acf is the ratio of the covariance to the variance. If you have pulses/level shifts/seasonal pulses and/or local time trends (my guess is YES!) then both the covariance and the variance are affected. The net result is that there is a downward bias to the calculated acf. I suggest that you post your time series and I will put it under a microscope. The problem with the DW test is that it only tests for lag 1 autocorrelation and of course following my discussion above is seriously downwards biased when anomalies are present. Yes Virginia, there is no Santa Claus! In closing I believe that more advanced(correct) tools are required.

Not the answer you're looking for? Browse other questions tagged time-series autocorrelation autoregressive or ask your own question.