How would one derive the density or pmf of a distribution that is shifted to the right ?

For example, a Poisson distribution that is truncated at zero , is shifted to the right . And it only takes values from $x = 1$, to $x = \infty$.

How can I derive its probability mass function ? Do I derive this from the poisson distribution ? I would like to see how it is done mathematically.

1. Shifting and truncation are different things

Truncating a Poisson at zero is not the same as shifting a Poisson to the right. Shifting just moves the whole thing left or right.

Truncation actually cuts off some of the distribution. As a result the remainder is "scaled up" so that the total probability is still 1.

Here's an illustration of the difference between shifting and truncation for normal distributions. The blue is the original in both cases, the gray is the result of either shifting or truncation: 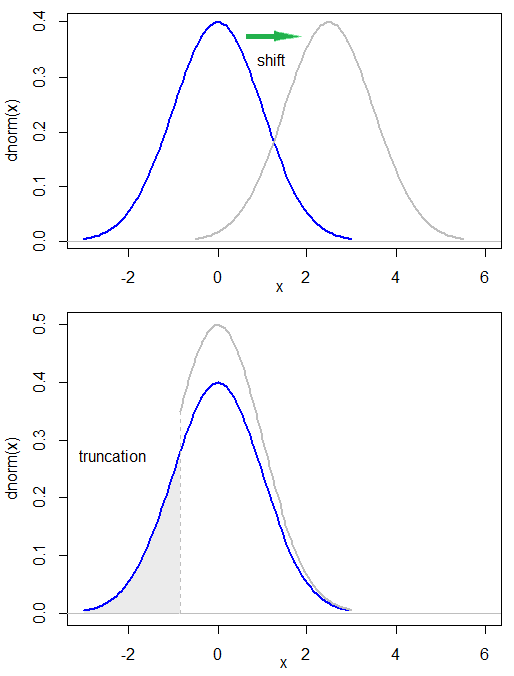 2. Writing down a shifted probability function

So consider a random variable $X\sim\text{Poisson}(\lambda)$

(The required "0 elsewhere"'s being understood as needed.)

3. Writing down a truncated probability function

Since you seem to be looking at left-truncation, I'll discuss that specifically, but right-truncation or truncation at both ends works analogously.

Let $Y$ be like $X$ but truncated at $0$ (which here can only mean that $0$ is truncated; the alternative meaning does nothing). Then

We can see how these look different by comparing (for a Poisson with $\lambda=1.8$) shifting up by 1 vs truncating 0: 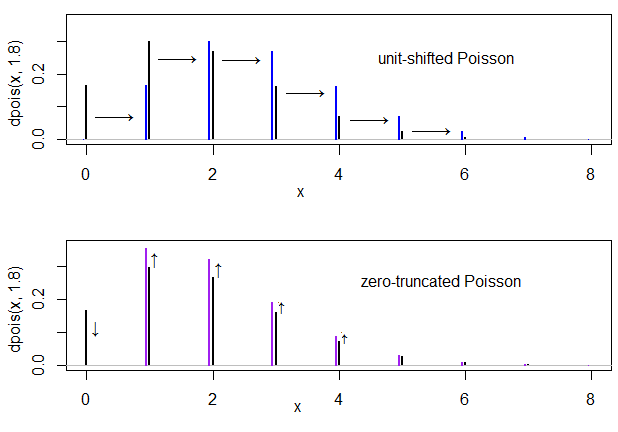 Additional discussion of truncation can be found here at Wikipedia.

If $X$ has a given distribution $f(x)$, then the distribution of $X+a$ is what you call the shifted distribution and is $g(x) = f(x-a)$. For discrete distributions, all the probability masses shift to the right by $a$ as in Glen_b's answer.

Not the answer you're looking for? Browse other questions tagged distributions mathematical-statistics poisson-distribution or ask your own question.

1
Why do we use zero-truncated poisson regression and do not just call outcome 1 outcome 0?
0
Deriving a constant in a probability mass function
6
Positive Poisson regression: what is the effect on the model of shifting vs truncating?