This question may have been asked before, but I couldn't find it. So, here goes.

From about 3000 data points that can be characterized as "wins" or "losses" (binomial), it turns out that there are 52.8% dumb luck wins. This is my dependent variable.

I also have some additional data that may help in predicting the above wins that could be considered an independent variable.

The question I'm trying to answer is:

If my independent variable can be used to predict 55% wins, how many trials are required (giving me 55% wins) for me to be 99% sure that this wasn't dumb luck?

The following R code is purposely hacky so I can see everything that is happening.

Back to my question. Does anyone see a problem with the code, and if not, does anyone have a way to cleanly sneak up on the right and left edges of the "answer"? 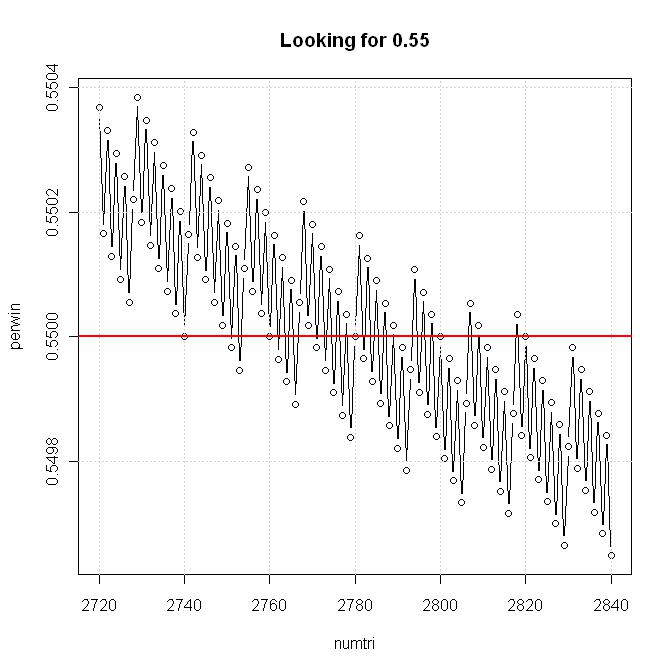 Per whuber's answer below, I now realize that to compare my alternate 55% wins (which came from the data) with my 52.8% "dumb luck" null (which also came from the data), I have to deal with the fuzz from both measured values. In other words, to be "99% sure" (whatever that means), the 1% tail of BOTH proportions needs to be compared.

For me to get comfortable with whuber's formula for N, I had to reproduce his algebra. In addition, because I know that I'll use this framework for more complicated problems, I bootstrapped the calculations.

Below are some of the results. The upper left graph was produced during the bootstrap process where N (the number of trials) was at 9000. As you can see, the 1% tail for the null extends further into the alternate than the 1% for the alternate. The conclusion? 9000 trials is not enough. The lower left graph is also during the bootstrap process where N was at 13,000. In this case, the 1% tail for the null falls into an area of the alternate that is less than the required 1% value. The conclusion? 13,000 trials is more than enough (too many) for the 1% level.

The upper right graph is where N=11109 (whuber's calculated value) and the 1% tail of the null extends the right amount into the alternate, aligning the 1% tails. The conclusion? 11109 trials are required for the 1% significance level (I am now comfortable with whuber's formula).

The lower right graph is where I used whuber's formula for N and varied the alternate q (at both the 1% and 5% significance levels) so I could have a reference of what might be an "acceptable zone" for alternates. In addition, I overlaid some actual alternates versus their associated number of data points (the blue dots). One point falls well below the 5% level, and even though it might provide 72% "wins", there simply aren't enough data points to differentiate it from 52.8% "dumb luck". So, I'll probably drop that point and the two others below 5% (and the independent variables that were used to select those points). 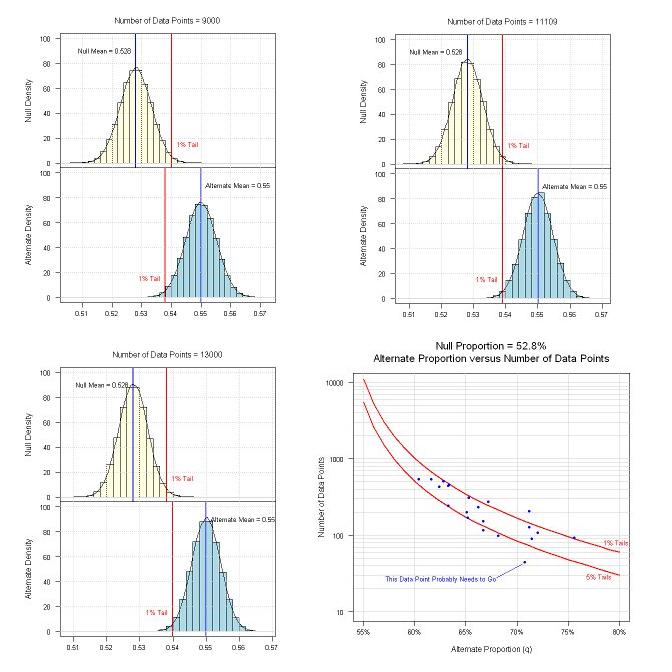 So, it seems to me there are two chances involved here: one in determining the test to distinguish "dumb luck" and another one that will subsequently determine how many trials you need. If this analysis correctly reflects the situation, the problem is easily solved. Note a few things:

The formula alluded to in #3 is this: in $N$ trials with probability $p$ of winning, the standard error of the proportion of wins is

The threshold therefore should be

where $\Phi$ denotes the standard normal cumulative distribution function. Equating this with your desired degree of certainty (such as $\beta$ = 99%) and solving this equation for $N$ (rounding up to the nearest integer) gives the solution

R code for the example