What diagnostic plots (and perhaps formal tests) do you find most informative for regressions where the outcome is a count variable?

I'm especially interested in Poisson and negative binomial models, as well as zero-inflated and hurdle counterparts of each. Most of the sources I've found simply plot the residuals vs. fitted values without discussion of what these plots "should" look like.

Wisdom and references greatly appreciated. The back story on why I'm asking this, if it's relevant, is my other question.

Here is what I usually like doing (for illustration I use the overdispersed and not very easily modelled quine data of pupil's days absent from school from MASS):

This should give you much of the useful information about your analysis and most steps work for all standard count data distributions (e.g., Poisson, Negative Binomial, COM Poisson, Power Laws).

For the approach of using standard diagnostic plots but wanting to know what they should look like, I like the paper:

One of the approaches mentioned there is to create several simulated datasets where the assumptions of interest are true and create the diagnostic plots for these simulated datasets and also create the diagnostic plot for the real data. put all these plots on the screen at the same time (randomly placing the one based on real data). Now you have a visual reference of what the plots should look like and if the assumptions hold for the real data then that plot should look just like the others (if you cannot tell which is the real data, then the assumptions being tested are likely close enough to true), but if the real data plot looks clearly different from the other, then that means that at least one of the assumptions don't hold. The vis.test function in the TeachingDemos package for R helps implement this as a test.

This is an old question, but I thought it would be useful to add that my DHARMa R package (available from CRAN, see here) now provides standardized residuals for GLMs and GLMMs, based on a simulation approach similar to what is suggested by @GregSnow.

From the package description:

The DHARMa package uses a simulation-based approach to create readily interpretable scaled residuals from fitted generalized linear mixed models. Currently supported are all 'merMod' classes from 'lme4' ('lmerMod', 'glmerMod'), 'glm' (including 'negbin' from 'MASS', but excluding quasi-distributions) and 'lm' model classes. Alternatively, externally created simulations, e.g. posterior predictive simulations from Bayesian software such as 'JAGS', 'STAN', or 'BUGS' can be processed as well. The resulting residuals are standardized to values between 0 and 1 and can be interpreted as intuitively as residuals from a linear regression. The package also provides a number of plot and test functions for typical model mispecification problem, such as over/underdispersion, zero-inflation, and spatial / temporal autocorrelation.

@Momo - you may want to update your recommendation 6, it is misleading. Normality of deviance residuals is in general not expected under a Poisson, as explained in the DHARMa vignette or here; and seing deviance residuals (or any other standard residuals) that differ from a straight line in a qqnorm plot is therefore in general no concern at all. The DHARMa package provides a qq plot that is reliable for diagnosing deviations from Poisson or other GLM families. I have created an example that demonstrates the problem with the deviance residuals here.

There is a function called glm.diag.plots in package boot, to generate diagnostic plots for GLMs. What it does:

I would definitely recommend the {performance} package. It has a check_model(mod1) function that shows the relevant diagnostic plots. 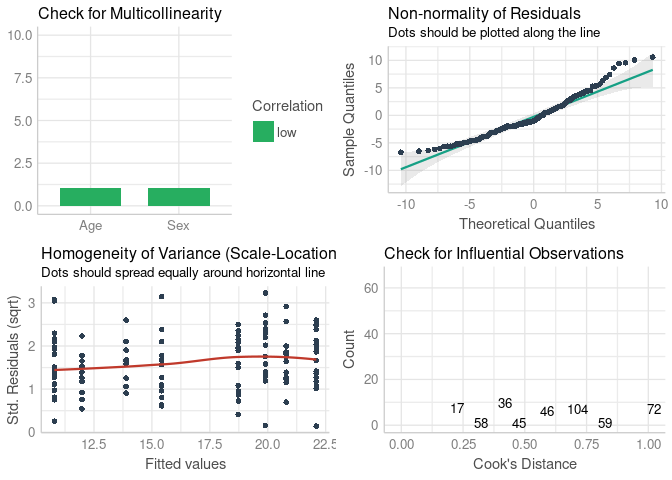 Not the answer you're looking for? Browse other questions tagged generalized-linear-model residuals negative-binomial-distribution zero-inflation poisson-regression or ask your own question.