Why does Bayes' Theorem work graphically?

From a mathematical standpoint Bayes' Theorem makes perfect sense to me (i.e., deriving and proving), but what I do not know is whether or not there is a nice geometric or graphical argument that can be shown to explain Bayes' Theorem. I tried Googling around for an answer to this and surprisingly I was not able to find anything on it.

Basically just draw a Venn diagram of two overlapping circles that are supposed to represent sets of events. Call them A and B. Now the intersection of the two is P(A, B) which can be read probability of A AND B. By the basic rules of probability, P(A, B) = P(A | B) P(B). And since there is nothing special about A versus B, it must also be P(B| A) P(A). Equating these two gives you Bayes Theorem.

Bayes Theorem is really quite simple. Bayesian statistics is harder because of two reason. One is that it takes a bit of abstraction to go from talking about random roles of dice to the probability that some fact is True. It required you to have a prior and this prior effects the posterior probability that you get in the end. And when you have to marginalize out a lot of parameters along the way, it is harder to see exactly how it is affected.

Some find that this seems kind of circular. But really, there is no way of getting around it. Data analyzed with a model doesn't lead you directly to Truth. Nothing does. It simply allows you to update your beliefs in a consistent way.

The other hard thing about Bayesian statistics is that the calculations become quite difficult except for simple problems and this is why all the mathematics is brought in to deal with it. We need to take advantage of every symmetry that we can to make the calculations easier or else resort to Monte Carlo simulations.

So Bayesian statistics is hard but Bayes theorem is really not hard at all. Don't over think it! It follows directly from the fact that the "AND" operator, in a probabilistic context, is symmetric. A AND B is the same as B AND A and everyone seems to understand that intuitively.

A physical argument to explain it was very clearly depicted by Galton in a two stage quincunx in the late 1800,s.

I have a rudimentary animation of it here (requires adequate pdf support to run).

I have also turned it into an allegory about an orange falling on Galton's head which I will try to upload in the future.

Or perhaps you might prefer the ABC rejection picture here.

An exercise based on it is here.

This Jan 10 2020 article on Medium explains with just one picture! Presume that 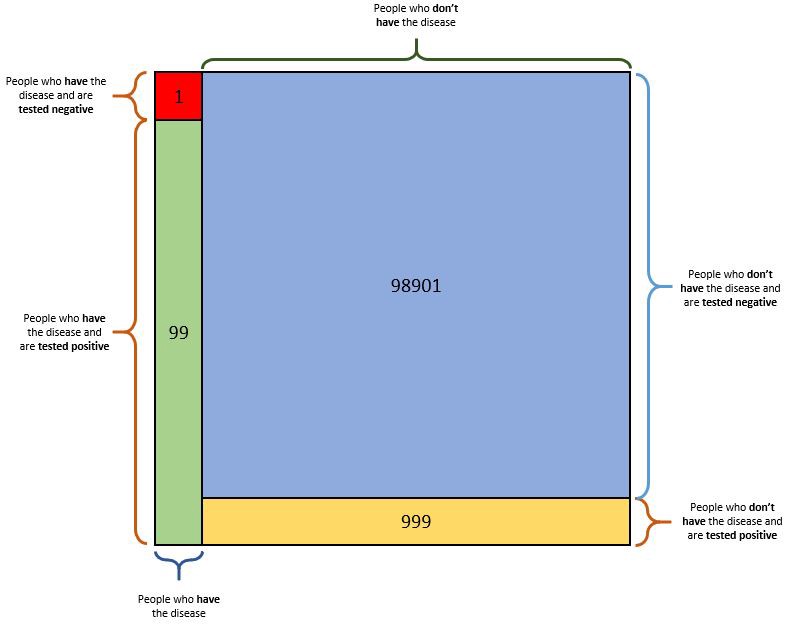 7
A question about notation of Bayes' Theorem
13
Why did Thomas Bayes find Bayes' theorem so challenging?
2
Bayes theorem an experiment design
25
Why Normalizing Factor is Required in Bayes Theorem?
13
Bayes Theorem with multiple conditions
5
Can frequentists use Bayes theorem?
4
Using Bayes for combining forecasts with different accuracies (Interview question)