I have a 7 points dataset that looks like this:

The plot is given here. 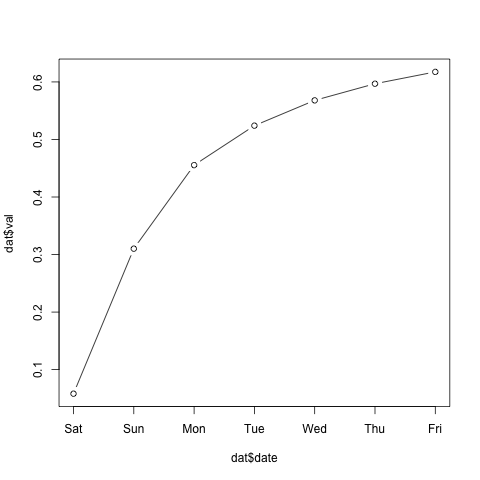 I'd like to create a prediction based on this dataset and I approach it so: 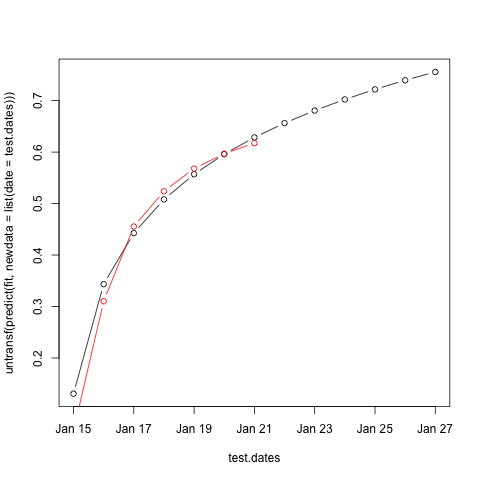 However, as the second plot suggests the true values (red) follow slightly different shape than the so predicted ones. What's the problem with the approach I'm taking? Is there a general problem in transforming the data using an exponential function and then using the inverted prediction?

There are a number of issues with such a strong transformation.

2) by ignoring the implied effect of the transformation on variance, the relative weights to observations can differ quite markedly (equal weights on the transformed scale imply unequal weights on the untransformed scale); since your model doesn't fit all that well given the smoothness of the data, the lack of fit to the relatively high-variance points can become strong.

My suggestion is to try a nonlinear least squares model to the original data.

You should incorporate any features you understand about the process into the model. For example if you expect it to have a horizontal asymptote eventually, you can incorporate that understanding; this kind of information is critical to reasonable behavior beyond the end of the sampling period. (For example, if you know that 1 is an upper bound, that information would be important.) 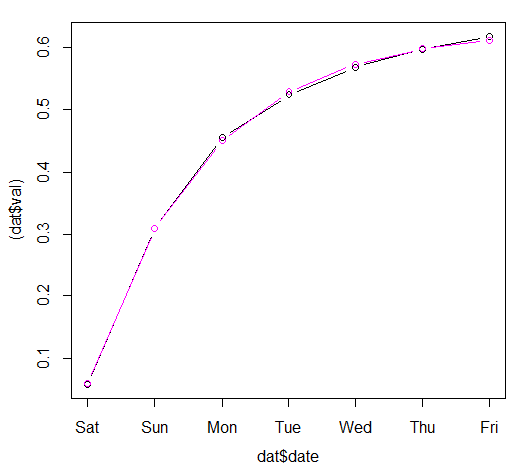 It's not a perfect fit (I wouldn't want to extrapolate more than a day or so), but it's a good deal better than the fit in your plot (which is different data). Note that since you (presumably) chose the "170" based on the data, you effectively have three parameters there.

If you do use that particular model above, note that it has a self-start function (I think it's called SSAsymp), so you don't need to supply starting values as I did (I chose those values simply by looking at the plot of the data). 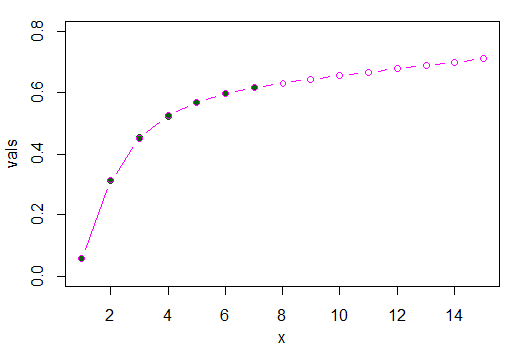 But with only 7 points so many parameters is hard to justify.

You may (and hopefully do) have a logical reason to choose a better function than mine, of course (and any well justified choice should certainly be used over what I have suggested, which is merely an example) -- but on the other hand I seriously doubt you have any good justification for taking 170th powers.

Such an approach has a number of advantages.

Note that natural splines will be linear beyond the ends of the data, so out of sample predictions from a well-fitting model will be straight lines whose slope is close to the general trend at the end of the observed data.

Here's an example, which shows that 3df may (slightly) underfit, while 4 may overfit:

Given such low sample size I'd probably have just used the smaller model, though if you had more data (around say 10 points) I'd probably go with 4df.

The code above generates the plot below; the fit in green has 3 df and the blue one has 4 df. 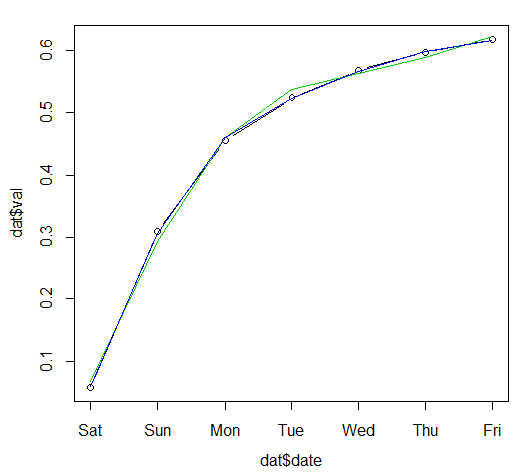 Not the answer you're looking for? Browse other questions tagged r regression data-transformation prediction or ask your own question.

5
Nonlinear Statistics?
4
How to fit an exponential equation of the form $Y = A + Be^{CX}$ to data
1
divergence between nls (simple power equation) on non-transformed data and lm on log transformed data in R

23
Regression for a model of form $y=ax^k$?
7
When to use zero-inflated poisson regression and negative binomial distribution
1
optimal sequential sampling in gaussian process models
0
Forecast ARIMA and out of sample evaluation
0
Deciding between linear and non-linear approach in a predictive model when the relationship 'looks linear'