Say I have multiple tests on N data points, for each I get a p-value ($0 < p < 1$). If the null hypothesis is true, I would expect that the distribution of p-value to be uniform. If, however the empiric CDF is larger than the uniform diagonal ($\text{CDF}(p) > p$), e.g. there are 0.1 fraction of samples with p-value below 0.01 etc., I could use a K-S test to test for the p-value distribution to be far from uniform, and thus conclude with one p-value to the question: "Are there significant point of data which deviates from the null hypothesis"?

Is the above methodology valid? Can you please give me a reference? If not? do you think this can be written as a method paper?

The basic idea sounds OK to me, but you would need to specify what kind of uncertainty you try to quantify with your test. In the usual case of statistical testing the uncertainty is supposed to be due to random sampling from a population. In your case you could be trying to quantify the randomness that belongs to a Monte Carlo experiment. This is a good idea, but it is non-standard and thus needs to be discussed carefully. Also note that the distribution of $p$-values can legitimately deviate from a standard continuous uniform distribution even if the null hypothesis is true, e.g. in a one-sided test: Is there a sample distribution so that the distribution of p-value is skewed towards 1?

To give a very meta answer: the K-S test does not perform too well, as you can see by looking at the distribution of $p$-values as you can see in the following simulation using Stata:

A K-S test on the resulting $p$-values results in the conclusion that the null hypothesis that the distribution of $p$-values is uniformly distributed is rejected at the 5% level: 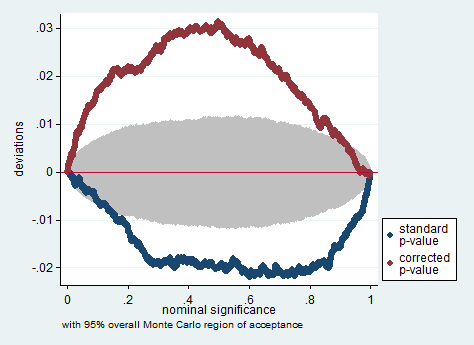 6
Is there a situation under which the distribution of p-values is skewed towards 1?

3
Is a data point significantly larger than a certain distribution average?
5
What is the meaning of a large p-value?
4
Why is the p-value distribution not uniform?
2
does p-value distribution indicate the suitability of the statistical test
1
Interpreting p-values much greater than 0.05. Does this mean populations are the same?
6
t test p value vs randomization-inference p value: What can we learn from comparison?
2
How to interpret the results of a chi square and p-values of a distribution uniformity test
9
Does p-value ever depend on the alternative?
0
Hypothesis test for arbitrary distribution